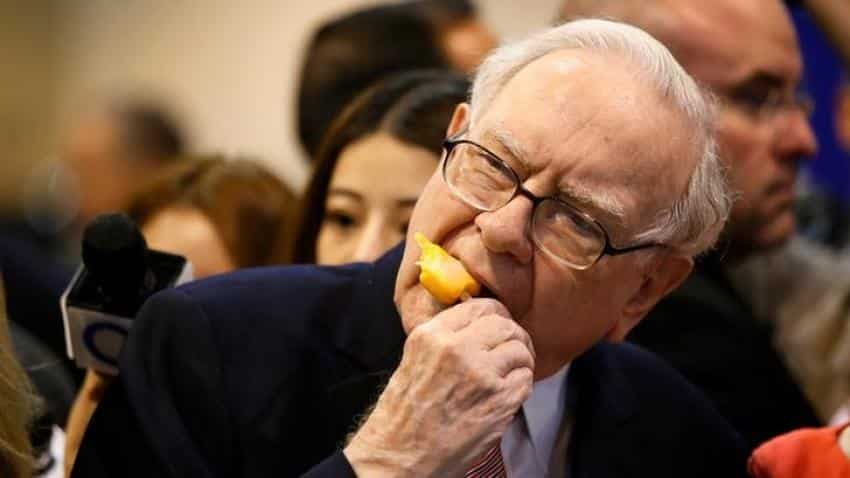 Here are key highlights of Buffett's comments from the company's 52nd AGM:

1. On Obamacare Repeal
"Medical costs are the tapeworm of American economic competitiveness.  "Our health costs have gone up (incredibly) and will go up a lot more ... that is a problem this society is having trouble with and is going to have more trouble with. It almost transcends (political party)."

"If you talk about the world competitiveness of American industry, (health costs are) the biggest single variable where we keep getting more and more out of whack with the rest of the world. "(The Obamacare repeal) is a huge tax cut for guys like me ... either the deficit goes up or they get the taxes from someone else."

2. On Berkshire's Durability
"I can`t think of anything that can harm Berkshire in a material, permanent way except weapons of mass destruction. "If that ever happens, there`ll be more to worry about than the price of Berkshire."

3. On Not Buying Amazon
"I was too dumb to realize what was going to happen. "I did not think (Jeff Bezos) could succeed on the scale that he has ... I underestimated the brilliance of the execution. It takes a lot of ability. "It always looked expensive ... and I never thought he would be where he is today. "We miss a lot of things."

4.On Berkshire's Break-up Value
"If I die tonight, the stock would go up tomorrow. There`d be speculation about breakups. Some of the parts might (temporarily) sell for more than the whole."

5. On International Trade
"Trade is beneficial to society but the people who see the benefits ... are getting small benefits, invisible benefits. The guy who`s getting hurt by it ... is feeling it very specifically."

6. On Stock Buybacks
"When the time comes, and it could come reasonably soon ... we have to re-examine what to do with funds that (can`t) be deployed well. It could be repurchases, it could be dividends."At the moment, we`re still optimistic enough about deploying the capital ... There will be markets where we can do (interesting) things on a big scale."

7. On Jobs
"Our kids will live better than we do because America does get more productive ... It`s essential to America that we become more productive."

8. On His Longevity
"We`ve been very, very lucky in life and so far our luck seems to be holding."

9.On His Legacy
"I really like teaching. If somebody thought I`d done a decent job of teaching, I`d feel pretty good about that."

10. On Understanding Tech Investments
"I make no pretense whatsoever of being on the same level as some 15-year-old (who has) an interest in tech. "I`ve gained no real knowledge on tech, well, since I was born, actually."

11. On Future Acquisitions
"We could do a very large deal if we thought it was sufficiently attractive ... We spent $16 billion back when we were much smaller ... in the fall of 2008. It never (created) a problem for me sleeping at night."

"Charlie and I really do not discuss sectors much ... we`re really opportunistic. We`re looking at all kinds of businesses all of the time. We`re hoping, we get a call ... and we know in the first five minutes whether (a deal) has a reasonable chance of happening."

"We (like) companies where consumer behavior can be (predicted) further off. We don`t really say we`ll go after companies in this field or that field."If you`re (primarily) interested in getting the highest price for your business, we`re not a good call (to make)."

12. On Board's Stock Holdings
"I looked at a company the other day and seven of the directors had never bought a share of stock ... They`ve been given a lot of stock. "What you want is a system that works well in spite of human nature. "American business overall has done very well for Americans."

13. On Berkshire CEO's Skills
"You need a sensible capital allocator in the job of being CEO of Berkshire. And we will have one. "Capital allocation probably should be close to their main talent." "Berkshire would not do well if someone was put in with skills in other areas but didn`t have the ability for capital allocation. "We certainly don`t want somebody if they lack a `money mind.`"

14. On Pay Consultants
"If the board hires a compensation consultant after I go, I will come back."

15. On How His Successor Might Be Compensated
"I would actually hope that we would have somebody A) That`s already very rich, which they should be. Working a long time and really not motivated by whether they have 10 times as much money ... and they might even wish to set an example by engaging for something far lower."

17. On Coal
"Over time, coal is essentially certain to decline as a percentage of the revenue of the (BNSF) railroad. We are looking for other sources of growth (besides) coal. "In my mind, we`re going to be shipping less coal 10 or 20 years from now. The coal aspect (of the business) is going to diminish."

18.On Running A Hands-off Conglomerate
"I think our hands-off style actually can add significant value to many companies. We free up at least 20 percent of the time for a CEO (compared to running) a public company. "I think we bring something to the party."

19. On Technology Holdings- IBM And Apple
"When I bought IBM six years ago, I thought it would do better in the six years ... than it has. Apple is much more of a consumer products business. In terms of analysing moats around it, consumer behavior ... they are two different types of decisions. I was wrong on the first one, and we`ll find out whether I was right on the second. "I could be making two mistakes on IBM. It`s harder to predict in my view ... how much price competition will enter in something like cloud services." "We missed (Amazon.com) entirely. We`ve never owned a share."

20. On Airlines
"It`s a fiercely competitive industry. The question is if it`s a suicidally competitive industry. It has been operating at 80 percent or better of capacity for some time. ... It`s fair to say they will operate at higher degrees of capacity over the next five or 10 years than at historical rates. They actually at present are earning quite high returns on invested capital, I think higher than FedEx or UPS. "It is no cinch that the industry will have more pricing sensibility in the next 10 years, but the conditions have improved for that."

21. Interest Rates
"I do not think it`s easy to predict the (course) of interest rates at all."

22. On Volatality
"It is the nature of market systems to occasionally go haywire in one direction or another. "When the rest of the world is fearful, we know America is going to come out fine."

23. On Market Speculation
"(Keynes said) there`s always some speculation. ... People can get very excited about speculating in markets. There`s nothing more agonizing than to see your neighbor (getting richer). Early on in the development of markets there`s probably some tendency to be more speculative than markets that have been around for a couple hundred years. Markets have a casino characteristic that has a lot of appeal.

"China being a newer market ... is likely to have some pretty extreme experiences. "Fear spreads like you cannot believe. The way the public can react is really extreme ... and that offers opportunities for investors. "Markets are there to be taken advantage of."

24. On Wells Fargo, In Which Berkshire Owns $27.8 Billion Stake
"At Wells Fargo, there were three significant mistakes, but one dwarfs all of the others. ... You have to be careful what you incentivize. There was an incentive system built around cross-selling. ... That was incentivizing the wrong kind of behavior. "The main problem was they didn`t act when they learned about it."

25. On Berkshire`s Earnings Report
"The realized investment gains or losses in any period really mean nothing ... We don`t really think about the timing of what we do. We do not make earnings forecasts.
"I feel very good about the first quarter even though our operating earnings were down a little bit."

26. On Vanguard Founder Jack Bogle
"It was not in the interests of Wall Street to have the development of index funds, because it brought down fees dramatically. When Jack started, very few people, certainly Wall Street did not applaud him. He was the subject of some derision. And now we`re talking trillions when we get into index funds.

"Jack at a minimum has saved, in the pockets of investors, he`s put tens and tens and tens of billions into their pockets. It`s Jack`s 88th birthday on Monday. Happy birthday, Jack and thank you on behalf of (investors)."

27. On Autonomous Vehicles
"Driverless trucks are a lot more of a threat than an opportunity to Burlington Northern. "Autonomous vehicles, widespread, would hurt us if they spread to trucks, and they would hurt our auto insurance business. They may be a long way off. That will depend on experience in the first early months of the introduction. If they make the world safer, it will be a very good thing but it won`t be a good thing for auto insurers."