The BOJ disappointed market hopes on Friday that it might increase its heavy buying of government debt or lower already negative interest rates, cementing the view that it is running out of options within its existing policy framework to lift prices and end two decades of deflationary pressure. 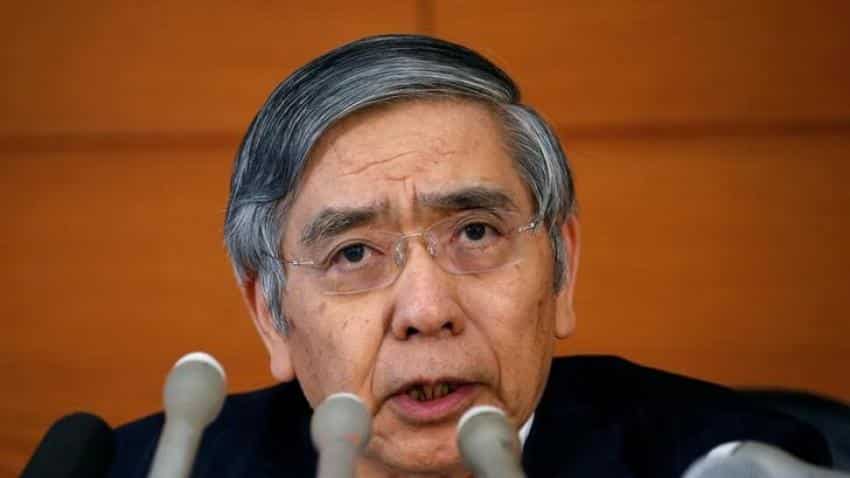 The Bank of Japan`s review of its monetary stimulus programme promised for September has revived expectations it could adopt some form of "helicopter money", printing money for government spending to spur inflation.

The BOJ disappointed market hopes on Friday that it might increase its heavy buying of government debt or lower already negative interest rates, cementing the view that it is running out of options within its existing policy framework to lift prices and end two decades of deflationary pressure.

With little to show for three years of massive monetary easing, economists say BOJ governor Haruhiko Kuroda`s "comprehensive assessment" of policy could push it into closer cooperation with Prime

Minister Shinzo Abe, who announced a fiscal spending package worth more than 28 trillion yen ($275 billion) on Wednesday in a bid to kickstart growth.

"The comprehensive review might be the first step toward further collaboration with the government, hinting at helicopter money," said Daiju Aoki, economist at UBS Securities.

"The government could issue 50-year bonds, and if the BOJ makes a commitment to hold them for a very long time, that would be like helicopter money."

The helicopter money metaphor for the aggressive printing of new money was first used by American economist Milton Friedman in 1969 and cited by former U.S. Federal Reserve chairman Ben Bernanke in 2002 as a scheme that could fight deflation.

Some economists, however, fear it could trigger hyperinflation and uncontrollable currency devaluation.

Speculation that Japan might take that path reached fever pitch earlier in July when Bernanke met Abe and Kuroda in Tokyo, though policymakers quickly tried to damp down such talk.

In the narrowest sense, a government can arrange a helicopter drop of cash by selling perpetual bonds, which never need to be repaid, directly to the central bank.

Economists do not expect this in Japan, but they do see a high chance of mission creep, with the BOJ perhaps committing to buy municipal bonds or debt issued by state-backed entities, giving its interventions more impact than in the treasury bond market, where it is currently buying 80 trillion yen a year of Japanese government bonds (JGBs) from financial institutions.

"Compared with government debt, these assets have low trading volume and low liquidity, so BOJ purchases stand a high chance of distorting these markets," said Shinichi Fukuda, a professor of economics at Tokyo University.

"Prices would have an upward bias, so even if the BOJ bought at market rates, this would be considered close to helicopter money."

Other options include creating a special account at the BOJ that the government can always borrow from, committing to hold a certain percentage of outstanding government debt or buying corporate bonds, economists say.

With the BOJ`s annual JGB purchases already more than twice the volume of new debt issued by the government, Japan has already adopted something akin to helicopter money, said Etsuro Honda, a former special adviser to the Cabinet and a key architect of Abe`s reflationary economic policy.

But it has not been enough to stop consumer prices falling in June at their fastest since the BOJ began quantitative easing in 2013.

Ahead of its July 29 policy meeting, sources had indicated that the BOJ was leaning towards standing pat because it planned no major changes to its consumer price forecasts.

But then Abe announced his unexpectedly large spending package two days earlier, which was notably lacking in details on how to fund it. Prominent cabinet ministers promptly piled in with public comments urging the BOJ to follow the government`s lead.

In the event, the BOJ made what economists called a token response by increasing its purchase of exchange-traded funds to 6 trillion yen, but it resisted pressure to buy more bonds, and it kept interest rates at minus 0.1 percent.

But the results of that pressure could finally show up in September`s review, after it has had time to come up with a more detailed plan to cooperate with Abe`s fiscal push.