France's new record temperature of 45.9 degrees C was registered in Gallargues-le-Montueux, a village in the southern department of Gard near Montpellier, breaking successive records set earlier in the day, the Meteo-France weather service told AFP. 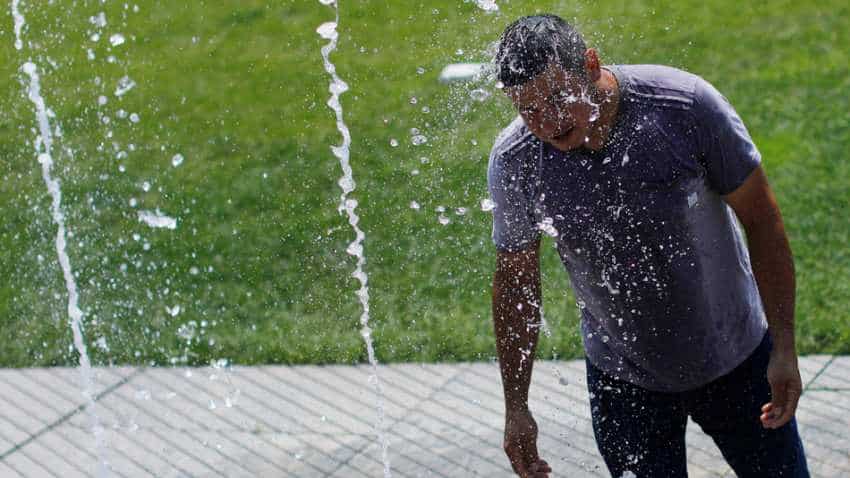 Earlier Friday, the mercury rose above 44 degrees C in the southeastern town of Carpentras. Image source: Reuters
Written By: AFP

Temperatures in France surpassed 45 degrees Celsius (113 degrees Fahrenheit) Friday for the first time on record as Europe sweltered in an early summer heatwave that has caused several deaths. With France, Spain, Italy and parts of central Europe hard hit by the record-breaking temperatures, officials pleaded with people to take common sense precautions. France's new record temperature of 45.9 degrees C was registered in Gallargues-le-Montueux, a village in the southern department of Gard near Montpellier, breaking successive records set earlier in the day, the Meteo-France weather service told AFP. This is the same area where the previous high of 44.1 degrees Celsius was set in August 2003. Records began at the turn of the 20th century.

Earlier Friday, the mercury rose above 44 degrees C in the southeastern town of Carpentras. The town was deserted, with cafe owners contemplating empty terraces which would normally be packed. "We have never seen this!" one exclaimed. The new record makes France just the seventh European country to have recorded a plus 45-degree temperature, along with Bulgaria, Portugal, Italy, Spain, Greece and North Macedonia, Meteo France said.

Two deaths linked to the heatwave were reported in Spain. A Spanish teenager felt dizzy while helping harvest wheat in the southern Andalusia region, took a dip in a swimming pool, and collapsed in convulsions.
He was rushed to hospital in the town of Cordoba where he died, the regional government said.

A 93-year-old man collapsed and died on the street in the northern Spanish city of Valladolid, police said, giving heatstroke as the cause of death.

Heat-related deaths have also been reported in Italy, France and Germany, mainly among the elderly.

France remains haunted by the memory of the devastating heatwave of August 2003 which exposed the shortcomings of emergency services at the height of the summer holidays.

That year, nearly 15,000 people are estimated to have died because of the heat, many of them elderly people at home. "I want to appeal to the sense of responsibility of citizens -- there are avoidable deaths in every heatwave," said French Prime Minister Edouard Philippe.

Germany's national weather service said the country experienced temperatures more than four degrees higher in June than the average, on one measure.

French Health Minister Agnes Buzyn warned people tempted to plunge into cold water, both young and old, to do so only in designated public bathing areas, adding that four people have drowned since the beginning of the week.

On Thursday, Buzyn lamented that despite a barrage of public health warnings on radio, TV and on public transport, some parents were still leaving their children in hot cars and joggers were out exercising in the midday heat.

A six-year-old Syrian child was seriously injured north of Paris Thursday after being catapulted into the air by water gushing from an open fire hydrant and then crashing to the ground.

The incident occurred in the multi-ethnic Saint-Denis neighbourhood, where "uncapping" hydrants has long been used as a way to cool off.

In the Italian city of Milan, a 72-year-old homeless man was found dead at the main train station Thursday after falling ill in the heatwave.

In Spain, firefighters continued to battle a large forest fire that broke out Wednesday in the northeastern Catalonia region.

Catalonia's forest service said the fire likely began when an "improperly managed" pile of manure at a chicken farm spontaneously combusted in the extreme heat.

Hundreds of firefighters backed by troops and aerial water bombers were trying to bring it under control, hampered by roasting 44-degree temperatures and very low humidity.

The stifling temperatures have caused air quality to nosedive in some European cities, prompting local authorities to take anti-pollution measures. In Paris, Lyon and Marseille, authorities have banned the most polluting cars from the roads in recent days.