The Bank of Japan's Governor Haruhiko Kuroda in a recently held seminar has said that the central bank is facing big challenges as inflation holds well below its 2% target, whereby underscoring the importance for the bank to maintain its massive stimulus programme. 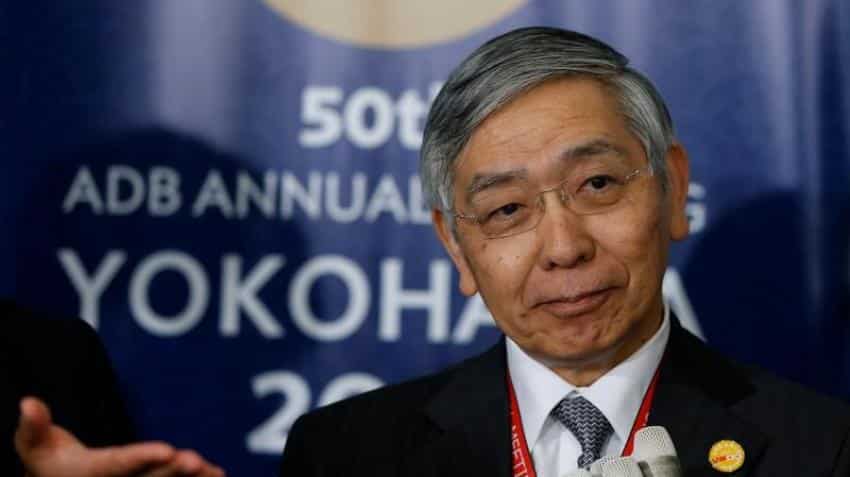 The Bank of Japan (BOJ) is facing big challenges as inflation holds well below its 2% target, underscoring the importance for Japan`s central bank to maintain its massive stimulus programme, BOJ Governor Haruhiko Kuroda said on Saturday.

"After four years ... our inflation rate is still close to zero. This is certainly a very challenging situation for central bank governors and central bankers in Japan," Kuroda told a seminar held on the sidelines of the Asian Development Bank`s annual meeting in Yokohama, eastern Japan.

While growth and price conditions have "greatly improved," with inflation still well below target, the bank will continue "strong" monetary easing to anchor inflation expectations around 2%, he said.

ALSO READ: Bank of Japan pushes back inflation timeline by one year

"I won`t say I`m struggling, but I`m making my best effort to achieve the 2% inflation target," he said.

Kuroda also said the yen`s depreciation against other currencies has not led to an increase in the country`s exports in recent years, as more companies now produce goods overseas.

Instead, the weak yen has pushed up corporate profits, which should lead to higher wages and capital expenditure, he said.

"Textbooks say that when your exchange rate depreciates, your exports will increase and improve your trade balance," Kuroda said.

"In the case of Japan, exchange rates are affecting not much the trade balance but the corporate profit situation, through which domestic demand will fluctuate," he said.

After more than three years of huge asset purchases failed to accelerate inflation, the BOJ revamped its policy framework last September to one aimed at capping long-term interest rates.

But it has kept a pledge to increase its government bond holdings at a pace of around 80 trillion yen ($710 billion) per year, as part of efforts to cap long-term rates.

Most analysts polled by Reuters expect the BOJ`s next move to be a tightening of monetary policy, though many do not expect it to happen until next year at the earliest.

A senior International Monetary Fund (IMF) official said Japan`s economy still needs support from ultra-easy policy despite budding signs of recovery, stressing that it was premature for the bank to withdraw stimulus any time soon.

Yen surges strongly after Bank of Japan holds off from easing