Investors piled into gold, safe-haven yen and bonds on Monday over nagging concerns about a prolonged US-China trade war and global growth, while Argentina`s peso plunged 15 per cent. 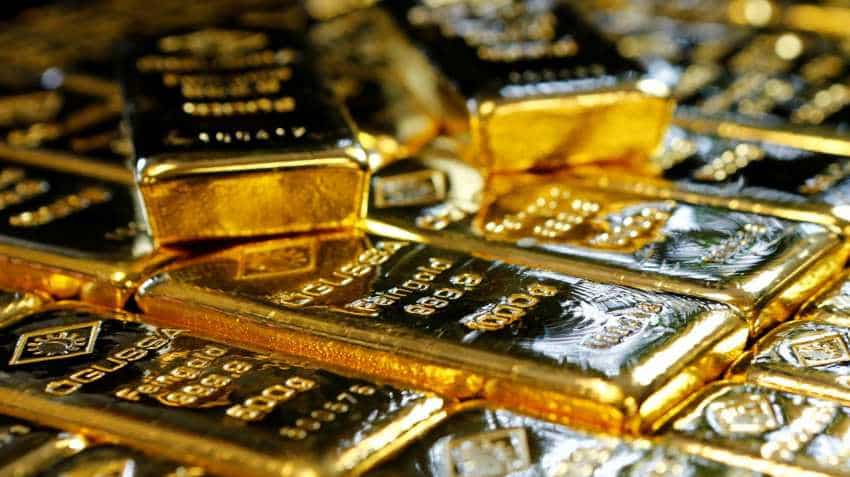 Diwali 2019 gold price PREDICTION: See at what price you may have to buy gold coin this Dhanteras!

Investors piled into gold, safe-haven yen and bonds on Monday over nagging concerns about a prolonged US-China trade war and global growth, while Argentina`s peso plunged 15% after voters handed its president an election mauling. The yen rose to its highest in more than a year and a half versus the dollar on the prospect the Japanese currency could gain more in the case of a drawn-out US-Sino trade conflict.

Concerns that a trade deal would not be reached before the 2020 US presidential election grew after Goldman Sachs on Sunday became the latest to cut its US growth outlook and warn a trade stand-off would fester past the election.

Stocks on Wall Street fell more than 1% to push a gauge of global equity performance down almost as much. Earlier in China stocks rallied more than 1% as the yuan avoided further drama after Chinese authorities allowed the yuan to slip below the seven-per-dollar level last week.

Stocks in the near term lack a catalyst either from company earnings, the Federal Reserve or a trade deal, said Rahul Shah, chief executive of Ideal Asset Management in New York.

"The promise of a trade deal coming this year, I think that`s becoming less and less likely," Shah said. "That does set up the market possibly for a correction at this point," he said.

Stocks could dip between 5% to 10% but prompt long-term investors to enter the market as valuations fall, he said. Half of Shah`s portfolio is corporate debt with the remainder tech stocks and shares with solid dividends, he said.

European shares fell, with the pan-regional FTSEurofirst 300 of leading European shares closing down 0.31%, while Germany`s export-heavy DAX off 0.12%.

Germany`s Ifo survey echoed the growth concerns with its measures for current conditions and economic expectations both having worsened in the third quarter.
Gold edged up, holding above the psychological $1,500 level. Spot gold added 1.1% to $1,512.51 an ounce.

"The longer the trade war drags on, the more likely it would weigh (on) the global outlook and crimp the world economy, a negative for market morale," said Joe Manimbo, senior market analyst at Western Union Business Solutions.

U.S. Treasury yields dropped across the board as trade worries and political tensions around the world in places such as Hong Kong and Argentina supported safe-haven assets.

U.S. long-term yields have fallen in six of the past nine sessions, reflecting investors` diminished risk appetite. Bond yields in Europe also were lower on the day.

The Argentine peso collapsed, falling to 55.85 to the dollar, after voters snubbed market-friendly President Mauricio Macri by giving the opposition a greater-than-expected victory in Sunday`s primary election.

The Merval stock index fell 30% and declines of between 18-20 cents in Argentina`s benchmark 10-year bonds left them trading at around 60 cents on the dollar or even lower.

Oil prices rose despite worries about a global economic slowdown and the ongoing US-China trade war, which has reduced demand for commodities such as crude.
International benchmark Brent crude futures rose 4 cents to settle at $58.57 a barrel while U.S. West Texas Intermediate (WTI) futures gained 43 cents to settle at $54.93 a barrel.

Diwali 2019 gold price PREDICTION: See at what price you may have to buy gold coin this Dhanteras!