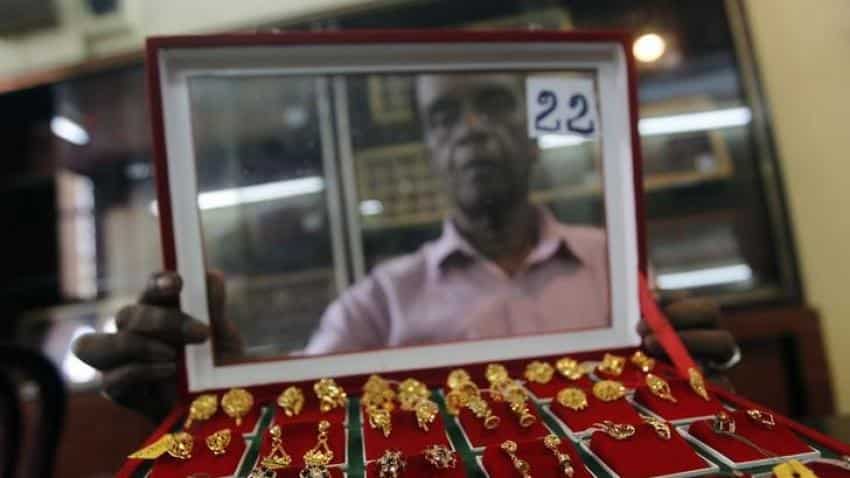 A vendor shows gold stud earrings to a customer at a jewellery showroom in Colombo. Image Source: Reuters
Written By: Reuters
RELATED NEWS

Gold was trading in a narrow range on Wednesday as investors waited for clues on whether the US Federal Reserve would hike interest rates this year.

At the end of the week, US Fed Chair Janet Yellen is scheduled to address a gathering of global central bankers in Jackson Hole, Wyoming. Recent hawkish comments from some policymakers have raised investors' expectations that Yellen might also take a less cautious tone.

"Markets are going to be quiet until Friday as everyone is waiting for some clues from Janet Yellen's speech," said Kent Li, deputy incharge for bullion desk, Wing Fung Precious Metals.

Spot gold may revisit its August 22 low of $1,331.35 within the next 24 hours, according to Reuters technical analyst Wang Tao.

"Despite the improving US-centric fundamentals, we expect investors to remain long in gold given the need to insure against wildcards into the year, namely the growth risk from Brexit into 2017 and the upcoming November's US presidential elections," OCBC Bank analyst Barnabas Gan said in a note.

"We suspect that any hawkish tone emanating from Yellen's speech regarding rates would have a negative impact on gold, but this Fed has proved time and again that it is not one to surprise the markets and if anything, is far more timid than bold," INTL FCStone analyst Edward Meir said in a note.

Gold is highly sensitive to rising US interest rates, which boost the opportunity cost of holding non-yielding gold, while lifting the US dollar, in which the metal is priced.