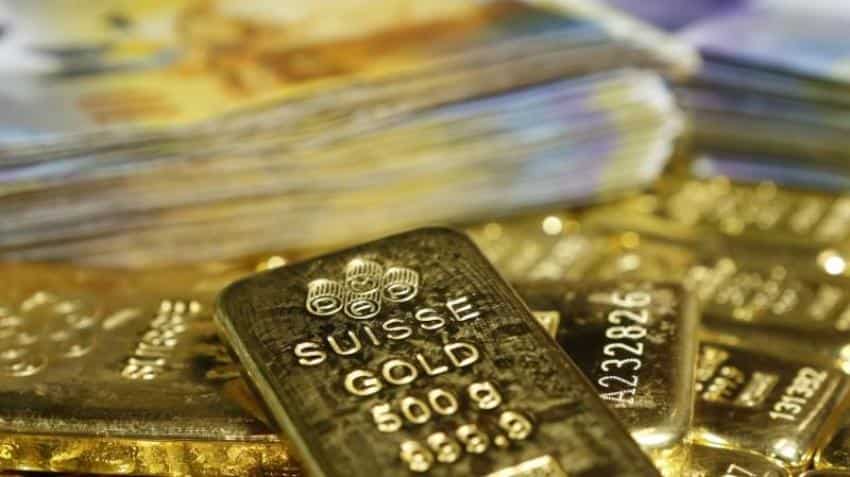 Gold prices slipped on Friday from a one-month high hit in the previous session as investors booked profits and the dollar strengthened, while worries over U.S.-China trade dispute capped losses.

The dollar index, which measures the greenback against a basket of six major currencies, rose 0.3 percent to 95.079. It hit its highest in over seven months earlier in the session.

"We saw a little bit of selling early this morning, a little bit of profit-taking ... Gold was unable to hold above this (previous days highs), so again we are sitting back in sort of that $1,290-$1,305 range," said MKS SA senior precious metals dealer Alex Thorndike.

Investors are keeping a close tab on trade tensions between the world`s top two economies and if the United States imposes tariffs on Chinese goods, gold could test the overnight highs of $1,309-$1,310 an ounce, said Thorndike.

U.S. President Trump has made up his mind to impose "pretty significant" tariffs on Chinese goods, an administration official said on Thursday, as Beijing warned that it was ready to respond if Washington chose to ratchet up trade tensions.

"An escalation of trade war could prove extremely disruptive for financial markets, so gold should hold its bid as we enter another phase of geopolitical uncertainty," he said.

Asian shares wobbled as investors braced for U.S. tariffs against China, while the euro hit a fresh two-week low after a cautious European Central Bank indicated it would not raise interest rates for some time.

Meanwhile, the Bank of Japan maintained its ultra-loose monetary policy and downgraded its view on inflation.