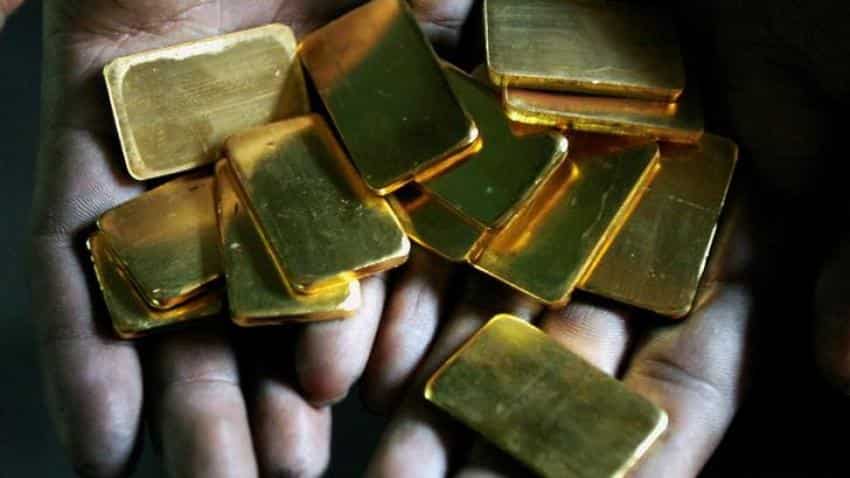 Gold prices rose on Monday as the US dollar slipped after last week`s rally though investors are watching for inflation data from the United States later this week for signs of the intensity of expected U.S. interest rate increases.

"Gold has picked up a little in the last 24 hours, as a hint of dollar weakness creeps back into markets," said Jordan Eliseo, chief economist at gold trader ABC Bullion.

The dollar index, a measure of the greenback against a basket of six major currencies, fell 0.34 percent to 90.137. Last week the index rose 1.4 percent because of a flight to safer assets amid a rout in global equity markets.

A weaker greenback makes dollar-denominated gold less expensive for holders of other currencies.

U.S. consumer price data will be released on Wednesday that should give clearer signs on the pace of inflation and with it the frequency of the anticipated interest rate rises. Concerns of rising inflation triggered the global equity drop last week.

"After last week`s sell off in risk assets, we expect gold to be well supported, especially if volatility in financial markets persists," Eliseo said.

"The uptick in prices today is not so much safe-haven buying, but more so potential short covering behaviour by market watchers," said OCBC analyst Barnabas Gan.

"It`s just common sense for some portfolio managers to exhibit some short-covering behaviour especially after the sell-off we saw last week."

Gold prices slipped 2.5 percent in the prior two weeks before Monday.

Hedge funds and money managers slashed their net-long position in COMEX gold for the first time in eight weeks in the week to Feb. 6, and cut it in silver, U.S. Commodity Futures Trading Commission data showed on Friday.