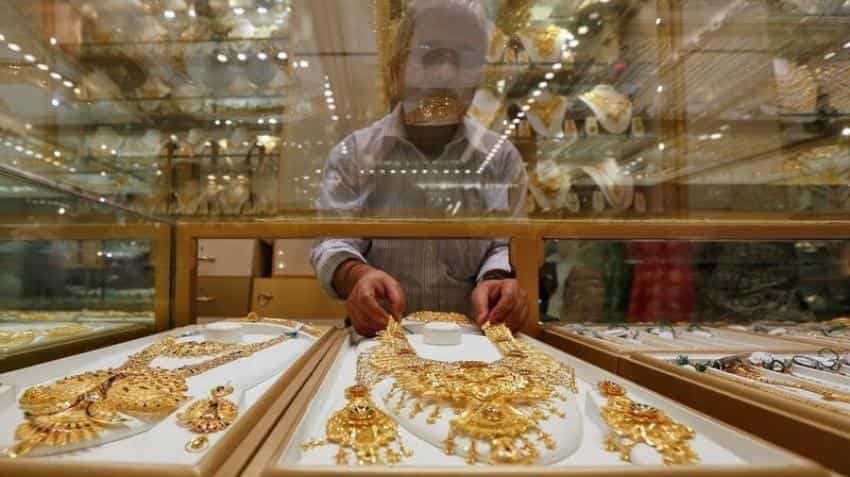 A salesman arranges a gold necklace in a display case inside a jewellery showroom on the occasion of Akshaya Tritiya in Kolkata. Image Source: Reuters

Gold prices held on to gains early Wednesday, after rising 0.6 % the session before on a weaker U.S. dollar, but rising equities capped gains.

* U.S. consumer prices recorded their biggest gain in five months in September as the cost of gasoline and rents surged, pointing to a steady pickup in inflation that could keep the Federal Reserve on track to raise interest rates in December.

* Global investors have raised cash holdings back to post-Brexit highs and cut bond allocations to 10-month lows, nervous that bond prices are at risk of a destabilising selloff, a Bank of America Merrill Lynch survey showed on Tuesday.

* Fueled by government spending and a housing frenzy, China`s economic growth likely steadied at 6.7 % in the third quarter, but slumping private investment, surging debt and the risk of a property correction are keeping the government and global investors on edge.

* Indian demand for platinum jewellery will grow by double digits next year, and Japanese consumption will stay strong, the head of Platinum Guild International said, with buyers drawn to prices that are off more than 20 % from an August peak.

* Deutsche Bank AG has agreed to pay $38 million to settle U.S. litigation over allegations it illegally conspired with other banks to fix silver prices at the expense of investors, according to court papers filed on Monday.

* Delegates to the annual conference by the London Bullion Market Association (LBMA) expect gold to rebound to well above $1,300 an ounce over the next 12 months.

* India`s crackdown on undisclosed foreign assets and income is curbing demand for gold in the world`s second-biggest consumer, while rising real interest rates and better returns from other financial markets are also hurting purchases, a banker said.

* The dollar index <.DXY>, which measures the greenback against a basket of currencies, was down 0.2 % at 97.663 after touching seven-month highs Monday.

* Asian shares inched ahead on Wednesday after Wall Street got a lift from encouraging corporate earnings and investors wagered a coming barrage of Chinese data would confirm the economy had at least stabilised. [GLOB/MKTS]

(Reporting by Nallur Sethuraman and Apeksha Nair in Bengaluru; Editing by Joseph Radford)