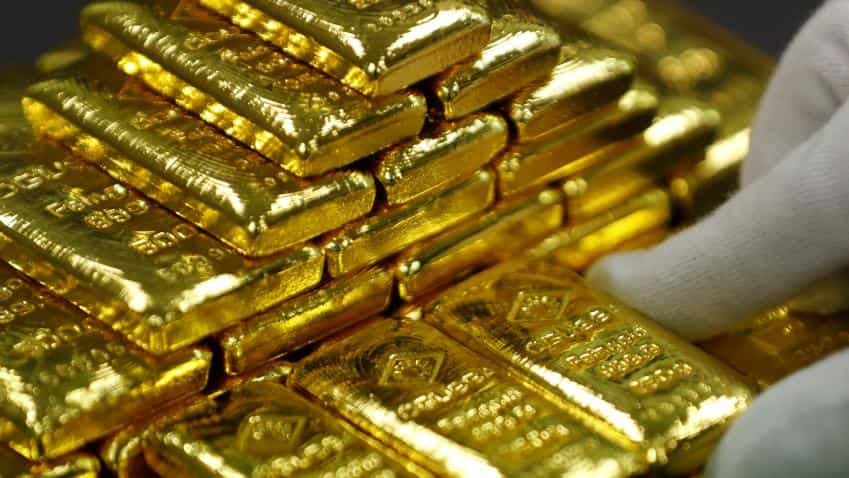 Gold prices touched their highest in more than four months on Monday, buoyed by a weaker U.S. dollar, which slumped to three-year lows against a basket of currencies.

"While the weaker dollar remained gold`s primary driver, investors are keeping an eye on the simmering geopolitical hot spot in the Middle East," said Stephen Innes, APAC head of trading at OANDA.

"Iran remains among the most poignant of geopolitical risks this year following President Trump`s decision not to ratify Iran`s compliance on the nuclear deal ... Gold investors are likely under-positioned for a significant escalation which could lead to considerable price increase."

Iran`s president said on Sunday the United States had failed to undermine a nuclear deal between Tehran and major powers, and hailed the accord as a "long-lasting victory" for Iran, state television reported.

US President Donald Trump on Friday delivered an ultimatum to European signatories of the deal to fix the "terrible flaws" of the agreement with Iran, or the United States would pull out.

The recent drop in U.S. unemployment could spark a surge in inflation that, given the Federal Reserve`s current policy framework, could trigger interest-rate hikes that bring on a recession, Boston Federal Reserve President Eric Rosengren warned on Friday.

Adding a touch of bullishness to gold was the data from U.S. Commodity Futures Trading Commission (CFTC) on Friday, which showed that hedge funds and money managers raised their net long positions in COMEX gold and silver contracts in the week to Jan. 9.

Spot gold may break a resistance at $1,341 per ounce and rise to the Sept. 8, 2017 high of $1,357.54, as suggested by a retracement analysis, according to Reuters technical analyst Wang Tao.

Among other precious metals, palladium rose 1 percent to $1,135 on Monday, after hitting a record high of $1,138 early in the session.

The metal has seen a sustained rally from high demand in the auto industry amid a supply deficit, analysts said.