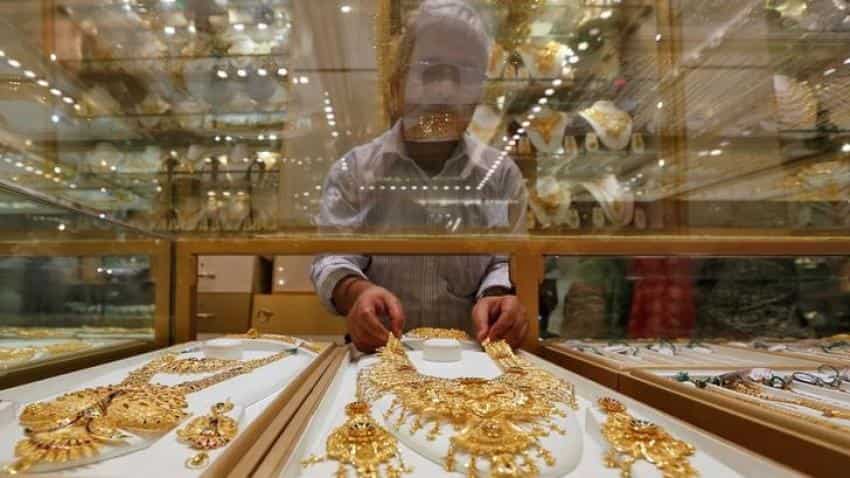 A salesman arranges a gold necklace in a display case inside a jewellery showroom on the occasion of Akshaya Tritiya in Kolkata, India. Image Source: Reuters
Written By: Reuters
RELATED NEWS

Gold rose slightly on Thursday after hitting a four-week low in the previous session, with the US dollar losing strength ahead of a speech by US Federal Reserve Chair Janet Yellen that will be closely watched for clues on US interest rate policy.

* Yellen is scheduled to address a meeting of central bankers in Jackson Hole, Wyoming, at 1400 GMT on Friday. Recent hawkish comments from Fed policymakers have raised investors' expectations that she might adopt a less cautious tone on rates.

* The dollar has swayed in both directions over the past week as expectations for a near-term Fed rate hike have ebbed and flowed.

* Rising US interest rates increase the opportunity cost of holding non-yielding bullion and boost the dollar, in which gold is priced.

* US home resales fell more than expected in July after four straight months of strong gains, as a lack of inventory limited choice for buyers, but further price rises suggested the housing market remained on solid ground.

* Polymetal expects gold prices to stay stable in the second half of this year if macroeconomic fundamentals are steady, a senior company official said, adding Russia's gold and silver miner also planned to return to the elite FTSE 100 index.

* Mexican regulators said they are examining whether mining company Goldcorp Inc broke any regulations in its handling of a long-running leak of contaminated water at Mexico's biggest gold mine.

* Asian stocks slipped on Thursday, taking their cue from an overnight drop on Wall Street.