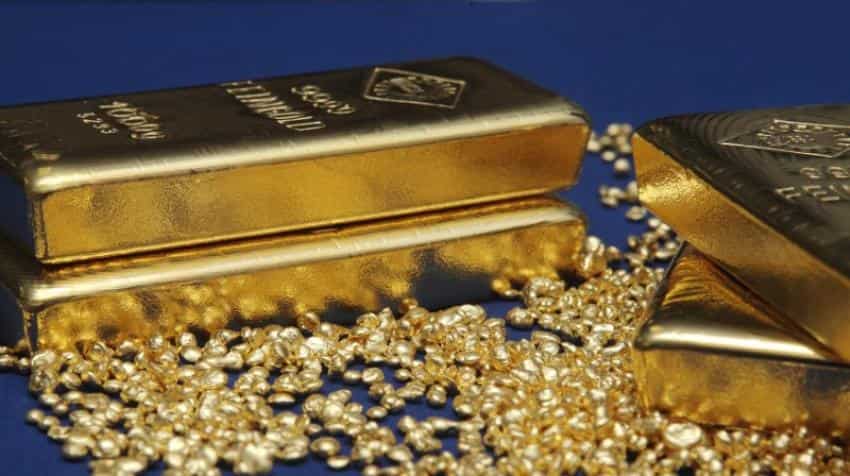 Gold edged back towards the previous day`s two-month low on Thursday, but remained hemmed into its recent narrow range after minutes from the U.S. Federal Reserve`s latest monetary policy meeting showed no consensus on the likely pace of interest rate hikes.

While the minutes failed to provide a clear outlook for further rate hikes investors are not convinced that the Fed will hold off on tightening its monetary policy, despite a soft inflation picture. The bank plans to start reducing the size of its $4.2 trillion portfolio of bonds and other securities later this year.

"The Fed is worried about soft inflation readings - no surprise there, and that will stay their hand on lifting rates for now. So far, so gold friendly," Mitsubishi analyst Jonathan Butler said. "The sting in the tail for gold will be any future Fed announcement regarding scaling back reinvesting in maturing bonds."

"This could lead to a mini-`taper tantrum` in the fixed income market - less reinvestment should mean higher yields, which means a less favourable real rate environment for gold."

The details of the Fed`s June meeting, at which policymakers voted to raise interest rates, showed several officials wanted to announce a start to the process of reducing the Fed`s large portfolio of Treasury bonds and mortgage-backed securities by the end of August, though others wanted to wait until later in the year.

Gold has come under heavy pressure since European and Canadian policymakers indicated last week that they were considering a turn towards a monetary tightening, a move that boosted bond yields.

European stocks and bond prices were lower on Thursday, as markets waited to see if European Central Bank meeting minutes later would give clues on its next moves, after the Fed`s statement the previous day provided barely any.

Investors were also looking out for a raft of U.S. data due later on Thursday including the ADP employment report, ISM non-manufacturing PMI and weekly jobless claims, ahead of Friday`s non-farm payroll employment figures.

"Friday`s NFP figures ... always have the potential to provide fireworks," MKS said in a note. "Until then though we see the metal consolidating between $1,215-35."