General Motors Co took the unusual step of appealing directly to its unionized employees in a blog post on Friday that laid out its latest offer aimed at ending a month-long strike. 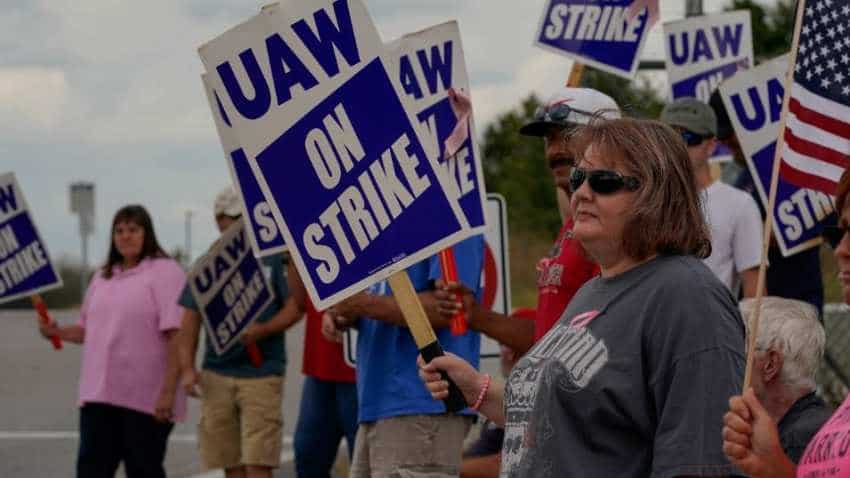 General Motors Co took the unusual step of appealing directly to its unionized employees in a blog post on Friday that laid out its latest offer aimed at ending a month-long strike, drawing an angry response from the union that the automaker was trying to "starve ... workers off the picket lines."
While emphasizing GM`s commitment to the collective bargaining process, the letter, signed by Gerald Johnson, executive vice-president for global manufacturing, circumvents United Auto Workers (UAW) leadership and points to frustration at a lack of progress on ending a conflict that has already cost the company more than $1 billion (789.5 million pounds).

The UAW strike began on Sept. 16, with the union`s 48,000 members at GM seeking higher pay, greater job security, a bigger share of profit and protection of healthcare benefits. Credit Suisse estimated the loss could hit about $1.5 billion, and the Center for Automotive Research estimated the weekly costs to GM and the UAW strike fund at $450 million and $12 million, respectively.

As part of its revised offer, GM boosted the amount it plans to invest in the United States to about $9 billion from its previous offer of $7 billion, a source familiar with the offer said. Of the new total, $7.7 billion would be invested directly in GM plants, with the rest going to joint ventures including a potential battery plant near the Lordstown, Ohio, factory that has been idled, the source said.

For temporary workers, GM said its offer would create a path to permanent employment and include a ratification bonus. "The strike has been hard on you, your families, our communities, the company, our suppliers and dealers," Johnson said. "We have advised the union that it`s critical that we get back to producing quality vehicles for our customers." The UAW in a statement said GM was "playing games at the expense of workers" and accused the automaker of "purposefully stalling the process to starve UAW-GM workers off the picket lines."

"At every step of the way, GM has attempted to undermine the ongoing, good-faith efforts the UAW has made to end this strike," the union said. In a subsequently released video https://drive.google.com/file/d/1MygB9CMeLtbChEMx33U8XMG_y2T92bKc/view, the UAW`s lead GM negotiator, Terry Dittes, said the union would bargain at the table and not through the media. "Let me be clear: the company`s strategy of releasing half-truths does nothing to reach a final settlement."

GM responded with a statement from its senior vice president of communications, Tony Cervone: "The goal of our communication has been to inform – not incite. We will continue to provide information in a straightforward, and importantly, factual way." Nevertheless, negotiations continued after that exchange and late on Friday the UAW said it had given GM a counterproposal that covered five unresolved issues the two sides have been discussing, Dittes said in a letter. "If GM accepts and agrees to this group of proposals, we will have a tentative agreement," he said.
GM declined to comment on the new union proposal.

FIVE ISSUES
In a Thursday letter to UAW leaders, GM urged the union to agree to around-the-clock negotiations, while the union insisted in its own letter on dealing with the five issues first before it responded to the broader proposal made to union negotiators Monday. GM Chief Executive Officer Mary Barra met on Wednesday with UAW President Gary Jones and Dittes to urge a faster response by the union to the company`s last offer.

One of the five issues the committees are discussing is the fate of four U.S. factories that GM has indicated could close, according to the UAW letter. Other issues include future technological changes to production and the fate of the UAW-GM joint training centre. Dittes said he did not know when the issues would be resolved, suggesting a final deal may not be close. UAW workers are concerned that as GM shifts to more electric vehicles it will require fewer workers, and that workers in battery production plants may earn less than those at existing transmission plants.
Reuters previously reported GM told the UAW it could build a new battery plant near the now-shuttered Lordstown factory, and assemble an electric truck at its Detroit Hamtramck plant.

Moody`s said in a Friday report that GM must maintain its flexibility under any new deal to build electric and self-driving vehicles without its fixed costs rising further. It said GM`s annual costs in wages and benefits are more than $1 billion higher than foreign automakers operating U.S. plants. "We expect that the long-term strategic benefits of obtaining a UAW contract ... will outweigh the costs of enduring a protracted strike that might last into November," Moody`s said.

The UAW`s membership is largely in the Midwest, in states that could be critical to both sides in the November 2020 presidential election, so the strike has drawn the attention of Republican President Donald Trump, his rivals seeking the Democratic nomination, and U.S. lawmakers. They have urged GM to build more vehicles in the United States and shift work from Mexico.