Major US stock indexes slipped on the news, which came days before China celebrates the 70th anniversary of the birth of the People`s Republic on Oct. 1, when the world`s No. 2 economy will shut down for a week of festivities. 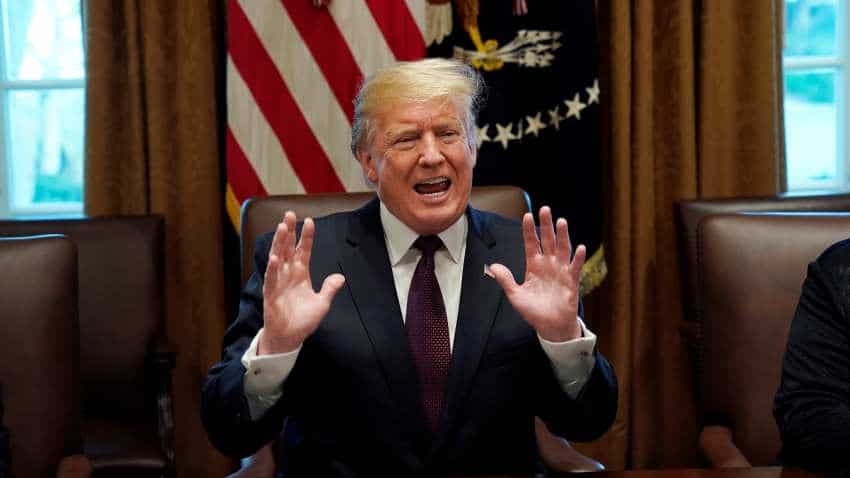 President Donald Trump`s administration is considering delisting Chinese companies from US stock exchanges, three sources briefed on the matter said on Friday, in what would be a radical escalation of U.S.-China trade tensions. The move would be part of a broader effort to limit US investment in Chinese companies, two of the sources said. One said it was motivated by the Trump administration`s growing security concerns about the companies` activities.

Major US stock indexes slipped on the news, which came days before China celebrates the 70th anniversary of the birth of the People`s Republic on Oct. 1, when the world`s No. 2 economy will shut down for a week of festivities. Shares of Hangzhou, Zhejiang-based Alibaba ended down 5.15%. JD.com fell 5.95% and Baidu Inc declined 3.67%. The iShares China Large-Cap ETF shed 1.15%.

Shares of New York Stock Exchange-owner Intercontinental Exchange Inc ended down 1.88% and shares of Nasdaq Inc declined 1.70%.
It was not immediately clear how any delisting would work.

In June, U.S. lawmakers from both parties introduced a bill to force Chinese companies listed on American stock exchanges to submit to regulatory oversight, including providing access to audits, or face delisting.

"Beijing should no longer be allowed to shield U.S.-listed Chinese companies from complying with American laws and regulations for financial transparency and accountability," Republican Senator Marco Rubio said at the time.

One of the sources briefed on the matter said the idea of delisting was the latest salvo in this longstanding dispute. "This is a very high priority for the administration. Chinese companies not complying with the PCAOB (Public Company Accounting Oversight Board) process poses risks to U.S. investors," the source said.

Any plan is subject to approval by Trump, who has given the green light to the discussion, Bloomberg reported, citing a person close to the deliberations.

Officials are also examining how the United States could put limits on Chinese companies included in stock indexes managed by U.S. firms, the agency cited three sources as saying.

No decision or action is imminent, two sources familiar with the discussions told Reuters. As of February, 156 Chinese companies were listed on the NASDAQ and New York Stock Exchanges, according to US government data, including at least 11 state-owned firms.

NYSE declined to comment on Friday, while Nasdaq, MSCI, S&P and FTSE Russell did not immediately respond to requests for comment.
China`s yuan currency, traded in offshore markets , fell against the dollar after the news to trade near its weakest against the greenback in about three weeks.

PLOY?
Trade talks between the United States and China are expected to be held Oct. 10-11 after months of tit-for-tat moves by both sides which have weakened global growth and driven rollercoaster moves in markets.

While the idea of delisting could be a manoeuvre ahead of those talks, the main aim was to counteract the civilian-military fusion of Chinese technology firms, the Made in China 2025 industrial development programme targeting key industries for domination and a growing surveillance state in Xinjiang, one of the sources said.

The source said there are longstanding concerns about U.S. capital enabling these activities, especially as the lines blur between state-owned and private companies in China.

"It`s all very disruptive, it just adds to uncertainty and it`s a big negative for business investment," said Scott Brown, chief economist at investment bank Raymond James. He noted, however, that both sides have used aggressive moves in the past ahead of talks. "You never know if it`s a ploy to get some leverage," he said.

Trump on Tuesday criticized Beijing`s trade practices in a speech at the United Nations, but the next day stoked hopes that the nearly 15-month standoff could be nearing an end. "They want to make a deal very badly ... It could happen sooner than you think," he told reporters in New York on Wednesday.

China says it cannot allow its companies to submit to oversight by PCOAB because of rules prohibiting the storage, processing or transfer of any material considered to be state secrets or national security matters.

U.S. hedge fund manager Kyle Bass, a prominent critic of China, said on Friday that Chinese companies should have to play by U.S. rules if they want to sell to U.S. investors. "The U.S. should require any securities sold in the US to adhere to US Securities Laws. Crazy huh?" Bass wrote on Twitter.