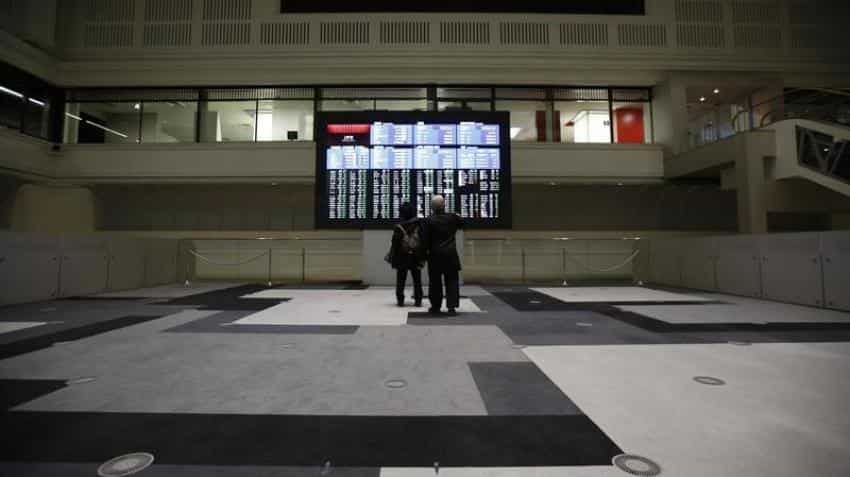 Asian shares and US stock futures dropped on Monday as investors weighed the near-certain prospect of an interest rate hike in the United States this month against news of slower growth in China this year.

Risk appetite also took a hit on rising geopolitical tensions in East Asia, as North Korea fired four ballistic missiles early in the day, while a spat between China and South Korea over missile defence deepened.

MSCI`s broadest dollar-denominated index of Asia-Pacific shares outside Japan was flat but Seoul shares were down 0.5% and Australia dipped 0.1%.

Federal Reserve Chair Janet Yellen on Friday all but confirmed market expectations for an interest rate rise in March barring any sharp deterioration in economic conditions.

U.S. money market futures are pricing in about 90% chance the Fed will raise interest rates by 0.25%age point at its meeting on March 14-15, with another rate hike fully priced in by September.

"A rate hike is almost done deal now. So the focus will be the pace of rate hikes after that. If there`s hawkish projections, the dollar could rise further," said Masahiro Ichikawa, senior strategist at Sumitomo Mitsui Asset Management.

Keeping risk appetite in check was rising tensions over North Korea, which on Monday fired four ballistic missiles, three of which landed in Japan`s exclusive economic zone, Japanese Prime Minister Shinzo Abe said, the latest in a series of provocative tests by the reclusive state.

The move came just after Japanese media reported on Saturday US Secretary of State Rex Tillerson is due to visit Japan, South Korea and China this month to discuss North Korea on his first trip to the region since he took up his post.

Adding to the tensions in the region, South Korea`s trade minister said on Sunday Seoul`s responses against discriminating action by China towards South Korean companies will be strengthened.

In the United States, President Donald Trump accused predecessor Barack Obama on Saturday of wiretapping him during the late stages of the 2016 election campaign, an accusation rejected by both Obama and former top U.S. intelligence official.

"There are worries that Trump may not be able to push through his spending plans, given delay in appointments of key staff. It now looks possible that the next year`s budget hardly reflects his agenda," said Masashi Murata, senior currency strategist at Brown Brothers Harriman.

Oil prices are still stuck within their well-worn ranges since December. International benchmark Brent futures traded at $55.83 per barrel, down 0.1%.