Trade was largely driven by cautious expectations of a win for Democrat Hillary Clinton, but some sharp swings in recent days across all asset classes meant big bets were relatively thin on the ground as Americans started voting. 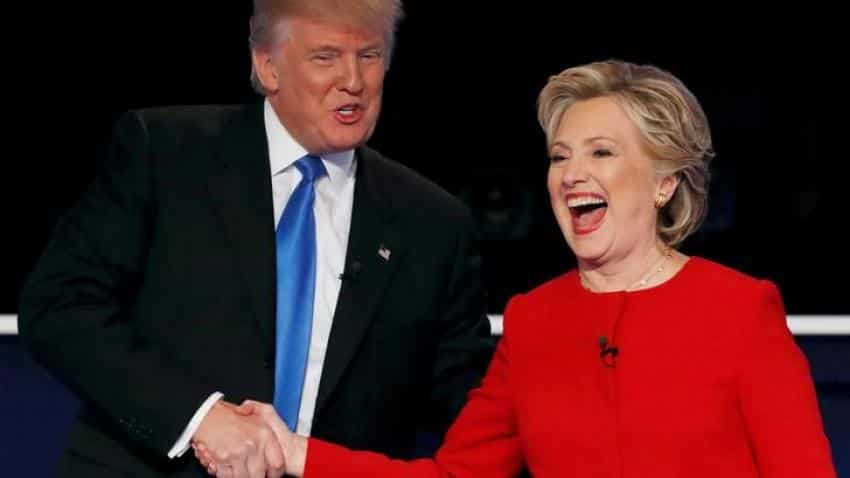 Sensex, Nifty trade in green as US election looms

Stocks and the dollar were little changed on Tuesday as global investors trod carefully, readying for the outcome of one of the most contentious US presidential elections in history.

Trade was largely driven by cautious expectations of a win for Democrat Hillary Clinton, but some sharp swings in recent days across all asset classes meant big bets were relatively thin on the ground as Americans started voting.

Wall Street's S&P 500, Dow Jones, and Nasdaq markets were expected to open a touch lower having enjoyed their best day since March on Monday, while the dollar held steady as bonds and gold made ground.

"While the market is broadly pricing in a Clinton victory, we are well away from the final results," said Ipek Ozkardeskaya, senior market analyst at London Capital Group.

"It is certainly too early to speculate. The least we can say is that the risk appetite is quite firm for such a high event-risk day."

At the end of a bruising election campaign, the Reuters/Ipsos States of the Nation poll gave Clinton a 90% chance of defeating Republican Donald Trump and said she was on track to win 303 Electoral College votes out of 270 needed, to Trump's 235.

Europe's index of leading 300 shares, which posted its biggest gain in two months on Monday, was flat ahead of US trading. A modest 0.15% gain for Britain`s FTSE 100 was balanced by 0.1 % dips in both Germany and France

MSCI's broadest index of Asia-Pacific shares outside Japan had ended up 0.6% overnight though Japan`s Nikkei 225 ended flat. MSCI`s global index of world shares was up 0.1 %.

Brexit revisited?
China's CSI 300 index index added 0.4%, with relief over improving prospects of a Clinton win offsetting bigger-than-expected declines in both imports and exports and a smaller-than-forecast trade balance in October.

Clinton is generally seen by investors as offering greater certainty and stability, and, until stumbling last week after FBI Director James Comey said the agency was reviewing newly discovered emails, had been seen as the clear favourite.

But investors remained wary, noting Britain`s shock vote in June to leave the European Union had wrongfooted bookmakers and most pollsters.

"A Trump victory would be a clear risk-off event that would trigger significant reactions and equity markets would take a sharp hit, at least in the short term," said Andreas Johnson, economist at Swedish bank SEB.

"However, the tightening of the polls indicate that the risk of a very close result is substantial.".

In currency markets the dollar, which had its best day in a month on Monday, edged slightly lower. The dollar index, a measure of its value against a basket of currencies, fell 0.2 % as the euro rose 0.2 % to $1.1060.

Having recorded its biggest one-day increase against the yen in almost four months on Monday, the dollar was flat against the Japanese currency at 104.40 yen on Tuesday.

It was also flat at 18.5855 versus the Mexican peso, which has ebbed and flowed in recent weeks in tandem with the perceived chances of a Trump victory.

The currency is seen as a proxy for bets on the election because Mexico is considered most vulnerable to Trump`s trade policies as 80 % of its exports go to the United States.

Most bond yields retreated on Tuesday after rising across the board on Monday. The benchmark 10-year U.S. Treasury yield fell one basis point to 1.815 %.

Sensex, Nifty trade in green as US election looms