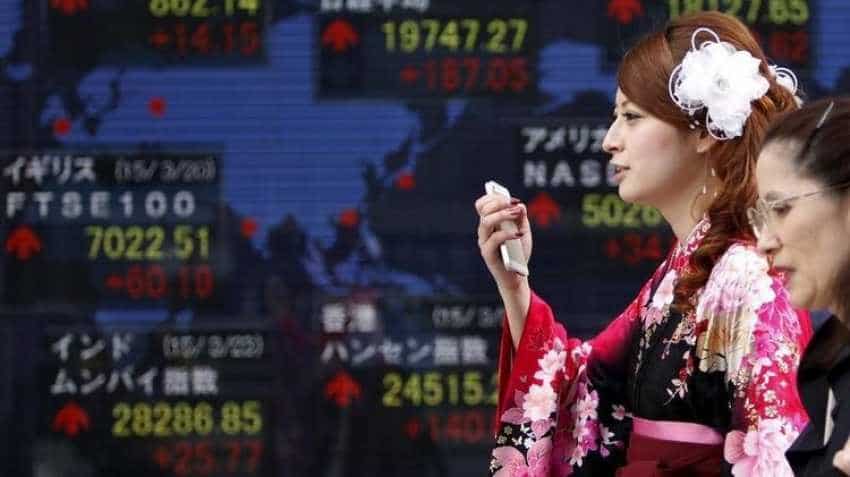 Asian shares hovered near seven-month highs early on Wednesday as global investors paused for breath after the strong rally seen earlier this week, while oil approached the key $70 per barrel mark. MSCI`s broadest index of Asia-Pacific shares outside Japan was up less than 0.1 percent early in the Asian trading day.

The index jumped more than 1 percent on Monday on data showing a return to growth for Chinese factory activity, while investor sentiment was further bolstered by improvements in U.S. manufacturing and construction spending. The benchmark inched up to a seven-month high on Tuesday amid a global run of gains that has pushed MSCI`s key gauge of global equities to a six-month high. The global index was up less than 0.1 percent on Wednesday morning, following small gains on Wall Street overnight.

Australian shares were up 0.6 percent, while Japan`s Nikkei stock index added 0.2 percent. On Tuesday, the Dow Jones Industrial Average fell 0.3 percent to 26,179.13 points, the S&P 500 was flat and the Nasdaq Composite added 0.25 percent to 7,848.69. "After such a strong rise it is no surprise that the risk rally stalled a little," Greg McKenna, strategist at McKenna Macro.

The consolidation in risk sentiment was reflected on Wednesday in easing yields U.S. Treasury yields.  Benchmark 10-year Treasury notes yielded 2.4706 percent, down from a U.S. close of 2.479 percent on Tuesday. The two-year yield, watched as a proxy for expectations of Fed rate rises, touched 2.2983 percent compared with a U.S. close of 2.308 percent.

Oil prices also stood near multi-month highs amid concerns over supply, with Brent crude up 0.45 percent at $69.68, close to its highest level so far in 2019 and near the key level of $70 per barrel. U.S. West Texas Intermediate (WTI) crude was flat at $62.57 a barrel.

News that the United States is considering more sanctions against Iran, the fourth-largest producer in the Organization of the Petroleum Exporting Countries (OPEC), and the halting of production at a crude terminal in Venezuela threaten to squeeze supply and pushed oil prices up on Tuesday.

In currency markets, the pound was flat at $1.3127, having recovered its footing after British Prime Minister Theresa May said she would seek another delay to Brexit to work out an EU divorce deal with opposition Labour leader Jeremy Corbyn. The dollar was down a hair against the yen to 111.27 and the euro was unchanged at $1.1202.

The dollar index, which tracks the greenback against a basket of six major rivals, was down less than 0.1 percent at 97.289. Gold was slightly lower, with spot gold trading at $1,291.31 per ounce.