Stocks and the greenback tanked mid-session after an ABC report that former national security adviser Michael Flynn was prepared to testify that Donald Trump instructed him to make contact with Russians during the presidential campaign. 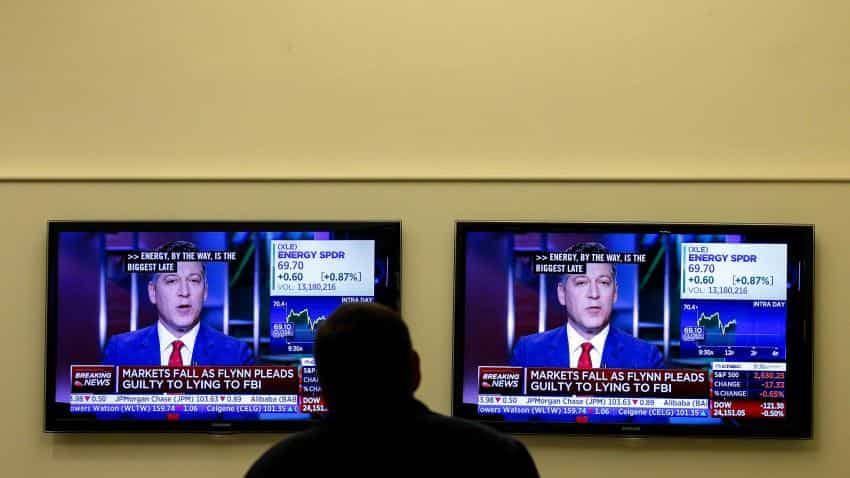 A trader watches, as a television displays the news about former U.S. national security adviser Michael Flynn, at the NYSE in New York. Photo: Reuters
Written By: Reuters
RELATED NEWS

U.S. stocks, the dollar and Treasury yields fell on Friday in a volatile session tied to developments in a probe into Russia`s involvement in the U.S. election as well as by progress with a tax bill in Congress.

Stocks and the greenback tanked mid-session after an ABC report that former national security adviser Michael Flynn was prepared to testify that Donald Trump instructed him to make contact with Russians during the presidential campaign.

The sharp moves partially reversed after U.S. Senate Republicans said they had enough support to pass a tax overhaul bill later in the day.

The S&P 500 closed at a record high on Thursday partly on hopes of passage of the bill, expected to cut corporate taxes. The Dow and the S&P both ended up for the week.

"It looks like (the moves in markets are) a reaction to news that Flynn is prepared to testify against Trump," said William Delwiche, investment strategist at Robert W. Baird in Milwaukee.

"You step back and look over the move we have had over the last week and a half, you could argue we are due for some sort of pull back or consolidation."

Reuters could not immediately verify the ABC News report on Flynn`s possible testimony, which would put the Republican president in an uncomfortable spot after he has denied any collusion between his campaign team and Moscow.

Flynn also pleaded guilty to lying to the FBI about contact with Russia`s ambassador. His reported decision to cooperate with the investigation led by Special Counsel Robert Mueller marked a major escalation in a probe into Russia`s alleged attempts to influence the 2016 U.S. presidential election.

If the Russia probe derails the tax legislation, it could hurt the chances of Republicans retaining their majorities in the House and Senate next year and jeopardize .

"To the extent that this (Flynn) headline further ensnares this administration into this investigation or suggests a widening of the Special Counsel’s probe I think that it is certainly a key concern for global investors and that’s why we are seeing the dollar come off," said Omer Esiner, chief market analyst at Commonwealth Foreign Exchange in Washington.

Crude futures rose a day after OPEC and other major producers agreed to continue reining in output until the end of 2018 to try to reduce a global oil glut and boost prices.