Stocks faltered and bonds rose on Wednesday as U.S. President Donald Trump`s political position was threatened by the criminal convictions of two former advisers, while the U.S. dollar reversed course and headed for its sixth straight day of losses. 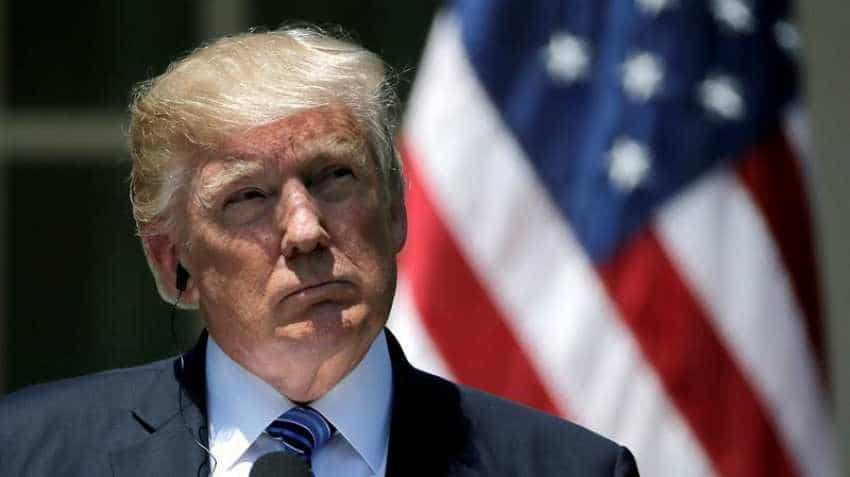 Investors digested the conviction of Trump`s former campaign chairman on eight counts of financial wrongdoing and a guilty plea by his former personal lawyer in separate cases. Image source: Reuters

Stocks faltered and bonds rose on Wednesday as U.S. President Donald Trump`s political position was threatened by the criminal convictions of two former advisers, while the U.S. dollar reversed course and headed for its sixth straight day of losses.

Investors digested the conviction of Trump`s former campaign chairman on eight counts of financial wrongdoing and a guilty plea by his former personal lawyer in separate cases. U.S. stock futures initially fell on the news but had recouped some losses by 1035 GMT, trading flat to down 0.1 percent.

While the immediate market reaction was not dramatic, the developments present further uncertainty over Trump`s leadership for investors to navigate. U.S. bond yields dropped as investors sought safety in Treasuries, and a dip in S&P 500 futures spread to European shares, which opened lower. U.S. 10-year yields were trading at 2.82315 percent, compared with Tuesday`s close of 2.844 percent.

"Trump has weathered quite a few allegations before this, where many people were quick with the `I` word (impeachment), so we need to see whether this could open a new chapter or if it will calm down again and markets move on," said Commerzbank rates strategist Christoph Rieger.

MSCI`s all-country world stock index was unmoved by the uncertainty, rising 0.3 percent after the S&P 500 hit a record intraday high of 2,873.23 points, topping the 2,872.87 set on Jan. 26. The index was poised for the longest-running bull market in its history. Its relentless rise highlights the divergence in fortunes between U.S. stocks - turbo-charged by tax cuts and share buybacks - and the rest of the world.

Year-on-year earnings growth in the U.S. is expected to be around 24 percent this year while Europe is forecast to deliver around 9 percent. European shares inched up 0.2 percent by 1100 GMT. They had opened lower as the market awaited U.S.-China trade talks, set to resume under the cloud of Trump`s prediction that they would make no real progress.

"The key point is these are mid-level officials," said Donough Kilmurray, managing director and head of the Investment Strategy Group for EMEA at Goldman Sachs. "It`s good they are talking, but at that level of engagement we doubt anything significant will come out of it."

The U.S. dollar gave up early gains, set for its sixth straight day of selling after Trump`s criticism of the Federal Reserve`s rate rises in a Reuters interview. The dollar index fell 0.1 percent to 95.172 by 1030 GMT.

"If you look at the transmission from economic growth to earnings growth to shareholder returns, it`s strongest in the U.S., it`s ok in Europe and pretty weak in EM," said Goldman`s Kilmurray, who has been underweight emerging markets for five years.

"The question we`re getting asked now by investors is whether what we see in EM is a sign that something bigger is going wrong in the global economy. Our answer to that is no, these issues have been local issues," he said.

A new threat of further sanctions on Russia from U.S. lawmakers hit the rouble and backed the market`s view that Russian sanctions would increase in severity regardless of the Trump administration. Chinese investors sold shares across the board, sending the Shanghai Composite index down 0.5 percent after the country`s central bank said it would not resort to strong stimulus to support growth.

German 10-year Bunds bucked the trend set by Treasuries, with yields hitting their highest since Aug 10, tightening the gap with the U.S. as the euro zone economy showed signs of improvement. Investors were also looking to Wednesday`s release of minutes from the U.S. Federal Reserve`s August meeting and a speech by Fed Chairman Jerome Powell on Friday for clues on future rate hikes.

"This could present the opportunity for the Fed to discuss longer-term issues, potentially including discussion around the balance sheet and the implementation of monetary policy," said Jim Reid, strategist at Deutsche Bank.

In commodity markets, U.S. crude rose 1.4 percent to $66.74 a barrel and Brent crude climbed 1.5 percent to $73.69 per barrel on an industry report showing a drop in U.S. crude inventories. Copper prices declined ahead of the trade talks. Spot gold slipped from a one-week high, down 0.2 percent to $1,193.87 an ounce.

MapMyIndia IPO to open today: Should you subscribe? See what experts, brokerages recommend