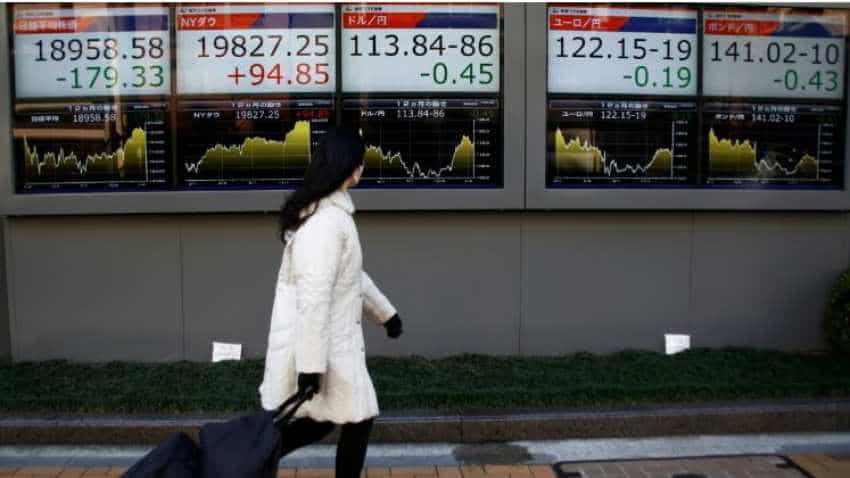 Global Markets: Asian shares inched higher while sterling came off five-month highs in volatile trade on Wednesday as investors looked to whether Britain can secure a deal to avoid a disorderly exit from the European Union. Officials and diplomats involved in negotiations over the acrimonious divorce between the world`s fifth-largest economy and its biggest trading bloc said that differences over the terms of the split had narrowed significantly.

The news lit a fire under European and U.S. equities, which jumped about 1% on Tuesday. The British pound rocketed to $1.28, a level not seen since May 21.

The pound has strengthened nearly 5% over the past week as investors rushed to reprice the prospect of a last-minute Brexit deal before the end-October deadline.

Still, the pound lost steam in Asia, falling 0.3% to $1.2752, as uncertainties remained on whether a deal will be sealed at a make-or-break EU summit on Thursday and Friday and if Britain`s minority government can get it through a divided UK parliament.

"Equities rallied everywhere supported by another set of Brexit headlines and as earnings season started in the United States," JPMorgan analysts wrote in a client note.

"Officials cautioned that talks haven’t finished yet and there could yet be problems in hitting the deadline of midnight Tuesday," they added.

The EU`s chief Brexit negotiator Michael Barnier had been demanding a legal text of any agreement by midnight U.K. time. However, the talks were still going on between UK Brexit negotiator David Frost and the EU`s executive European Commission past midnight in Brussels.

The EU will determine whether a deal is fit to be put to Thursday`s leaders` summit for consideration.

"Watching the UK news channels last night, the arithmetic for achieving said approval is challenging to say the least," analysts at National Australia Bank wrote in a note.

Elsewhere, news on the U.S.-China trade front has been less encouraging.

The news helped to lift the Japanese yen from a 2-1/2 month low against the greenback hit on Tuesday.

"There remain concerns over whether everything goes all right until the APEC meeting in November when they are expected to sign a deal. I got the impression that the market got a bit too optimistic," said Naoya Oshikubo, senior economist at Sumitomo Mitsui Trust Asset in Tokyo.

The dollar itself was under pressure against a basket of six major currencies with its index <.DXY> hovering near three-week lows at 98.338. The euro was little changed at $1.1028.

In commodities, Brent crude added 10 cents to $58.84 a barrel, while U.S. crude rose 10 cents to $52.91 after falling the previous session over fears the unrelenting U.S.-China trade war would keep squeezing the global economy.