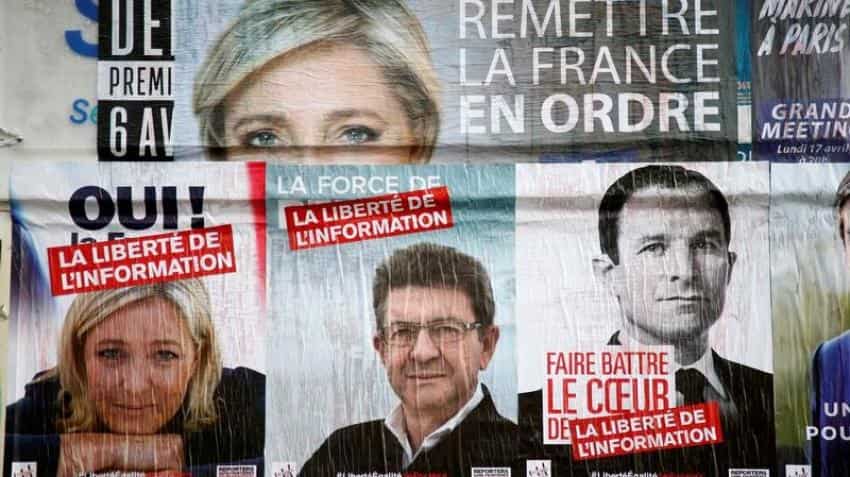 If Donald Trump`s election in the United States and Britain`s decision to quit the European Union stirred the global economic waters, then there is the potential for a tsunami on the near horizon.

The coming week is the last before the first round of France`s presidential election on April 23. It has already been a barrel of surprises -- an incumbent not running, the far right in ascendance, an independent seen as likely winner, a scandal hampering the early favourite.

But the latest twist -- one with arguably the most potential global economic impact -- could conceivably see a far-left candidate, one-time communist Jean-Luc Mélenchon, make it through to the May 7 run-off against a far-right nationalist, Marine Le Pen.

The potential economic shock stems from the fact that both are against the euro and the European Union, threatening the stability and even existence of both. The word Frexit -- the Gallic version of Brexit -- has been doing the rounds.

Boosted by a strong performance in televised debates, Mélenchon has gathered momentum in the past week. One poll on Tuesday showed his support as high as 19 percent, within four points of centrist Emmanuel Macron and within five of Le Pen; the latest survey on Thursday put him on 17 percent.

"For France, Europe and markets, a run-off between Mélenchon and ultra-right Marine Le Pen on May 7 would be a choice between bad and ugly," Berenberg bank said in a note on Thursday.

The odds are still strongly against it happening: the polls show former economy minister Macron winning the big prize. But the fact is that perennial outsider Mélenchon and Le Pen are in the frame.

France`s economy offers a mixed bag. Unemployment is at 10 percent and has been around that mark for five years. Projected economic growth of just 1.4 percent for this year puts France down at 25th equal (with Belgium) out of 28 EU countries.

Other data shows the strain too. A study by World Economics of the relative value of euros within the euro zone, shows a yawning gap between Germany and France, making the latter far less competitive.

But although growth is weak, France performs much better than other economies such as the United States and Britain in terms of income equality.

One recent study, for example, found that the median French income in 2012 was about 17 percent higher than in 1996, while the median U.S. income was just 2 percent above its 1996 level.

How all this plays with the French equivalent of the angry, left-out voters who went for Trump and Brexit remains to be seen.

One recent bright spot for France has been the Purchasing Managers` Index, which has shown a degree of rising optimism among businesses as the euro zone also improves.

On Friday in the coming week -- just before the first round vote -- flash PMIs for April are released. Last time around all three of France`s readings -- manufacturing, services and composite -- were well in the expansion range, particularly services.

Early Reuters polling suggests the services and manufacturing reports will essentially be unchanged, possibly as a result of election uncertainty.

The euro zone and Germany will also report. The former is expected to improve slightly on a composite basis, which would add to the overall view of a steadily recovering economy. German manufacturing could show a tiny dip.

Outside the euro zone, British retail sales data for March, released on Friday April 21, should provide another glimpse of how consumer sentiment is holding up as Brexit negotiations loom.

Economists and others were surprised by the tenacity of British consumers after last year`s vote to leave the EU, but there have been recent signs of a tailing off.

The British Retail Consortium said in the past week that its gauge of first-quarter consumer shopping showed the slowest growth since 2008.

It was put down to inflation rising as a result of the post-Brexit vote fall in the pound. There were also some seasonal impacts relating to when Easter fell last year.

Snapshots of the state of the U.S. economy, meanwhile, will come from New York and Philadelphia Federal Reserve reports and from March industrial output data.

The latter is expected to climb, reflecting an economy that has recovered well enough for the U.S. Federal Reserve to begin a tentative rate-tightening cycle.