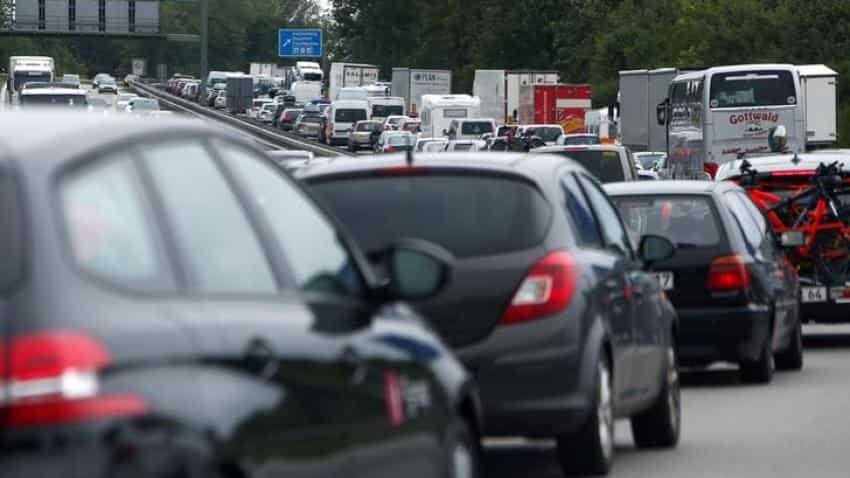 New car registrations in Germany, Europe`s largest auto market, will grow to one of their highest-ever levels this year.Image source: Reuters

New car registrations in Germany, Europe`s largest auto market, will grow to one of their highest-ever levels this year, fuelled by a strong economy and sales incentives for cleaner diesel models, the country`s main auto lobby said.

Registrations of passenger cars in the home market of Volkswagen, Daimler and BMW may rise at least 3 percent to 3.4 to 3.5 million vehicles, nearing an all-time record of 3.8 million achieved in 2009 thanks to a national scrappage scheme to spur a then-slumping car market.

"A level of between 3.4 and 3.5 million is a historic high," Wissmann said. "Except for the (year of the) scrappage incentives, I can`t think of another year" with such strong demand.

However, with diesel cars` share of overall German registrations locked into decline amid a public discussion about possible driving bans to help fight pollution, passenger-car sales may slide by 2 percent next year to slightly below 3.4 million vehicles, Wissmann said.

"The debate about driving bans is the only factor that brings about a certain restraint among customers," Wissmann said.

He said he predicted that the market share of diesel models in Germany would drop below 40 percent on average in 2017 from about 45 to 46 percent last year.

Pressure is growing on Germany to enforce Clean Air limits as dozens of cities, including Munich and Stuttgart where BMW and Daimler are based, could face penalties for allowing nitrogen dioxide (NO2) levels in excess of European Union limits introduced in 2010, the DUH environmental lobby has said.

The Federal Administrative Court is expected to discuss on Feb. 22, 2018 a ruling by a lower tribunal which said diesel vehicle bans are necessary to help meet EU Clean Air rules.

Can Germany still qualify for Round of 16, after 1-1 draw against Spain? FIFA World Cup 2022 Points Table shows they can

World could lose $4 trillion in economic output between now and 2026 - worth the size of German economy: IMF