With the summit taking place after Britain's vote in June to exit the European Union and before the US presidential election in November, observers expect G20 leaders to mount a defence of free trade and globalisation and warn against isolationism. 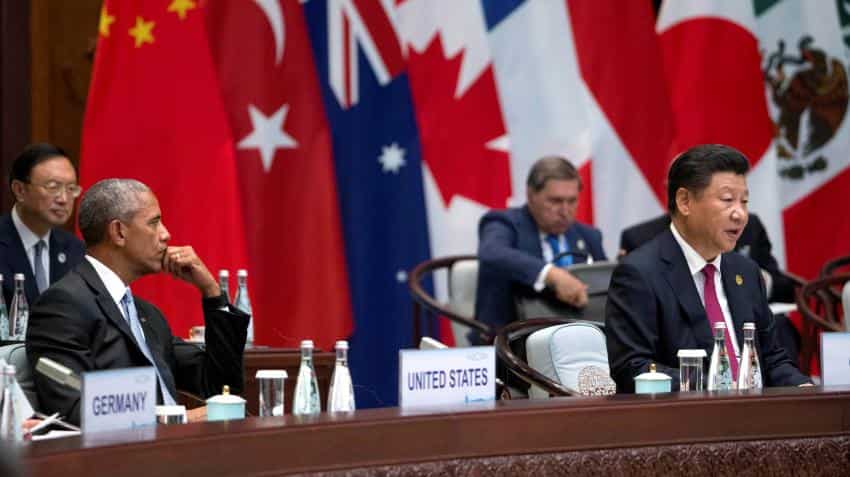 The global economy is being threatened by rising protectionism and risks from highly leveraged financial markets, Chinese President Xi Jinping said at the open of a two-day summit of leaders from G20 nations.

His warning on Sunday followed bilateral talks with Barack Obama that the US president described as "extremely productive", but which failed to bring both sides closer on thornier topics such as tensions in the South China Sea.

With the summit taking place after Britain's vote in June to exit the European Union and before the US presidential election in November, observers expect G20 leaders to mount a defence of free trade and globalisation and warn against isolationism.

The global economy has arrived "at a crucial juncture", Xi said, in the face of sluggish demand, volatile financial markets and feeble trade and investment.

G20 countries are set to agree in a communique at the end of the summit that all policy measures - including monetary, fiscal and structural reforms - should be used to achieve solid and sustainable economic growth, Japanese Deputy Chief Cabinet Secretary Koichi Hagiuda said.

"Commitment will be made to utilising all three policy tools of monetary and fiscal policies and structural reforms to achieve solid, sustainable, balanced and inclusive growth," Hagiuda told reporters on the sidelines of the summit.

Xi also called on G20 countries to match their words with actions.

"We should turn the G20 group into an action team, instead of a talk shop," he said.

But some of the G20 leaders have begun drawing battle lines in disputes over issues ranging from trade and investment to tax policy and industrial overcapacity.

Battle lines
On Sunday, Xi held talks with Australian Prime Minister Malcolm Turnbull and told him he hoped Australia would continue to provide a fair, transparent and predictable policy environment for foreign investors.

China was angered when Australia blocked the A$10 billion ($7.7 billion) sale of the country`s biggest energy grid to Chinese bidders last month.

China has accused Australia of bowing to protectionist sentiment in blocking the bid for Ausgrid, as well as an earlier one by a China-led consortium to buy cattle company Kidman & Co.

Beijing has also criticised Australia, a staunch US ally, for running surveillance flights over disputed islands in the South China Sea.

Meanwhile, European Commission President Jean-Claude Juncker said China must set up a mechanism to address its problem of industrial overcapacity, saying it was "unacceptable" the European steel industry had lost so many jobs in recent years.

"Overcapacity is a global problem but there is a particular Chinese element," he told a news conference.

Britain's future after its departure from the European Union was also subject to discussion.

Obama reassured Prime Minister May that Britain`s closest political, commercial and military ally would stand by her.

But he did not shrink away from his stance that Brexit was a mistake and that London would not be able to jump the queue to arrange a bilateral trade deal.

Juncker said that if Britain wanted access to the European Union`s common market, it needed to respect the rules of the common market.

Late night talks
Obama held talks with Xi on Saturday that ran late into the night.

He urged Beijing to uphold its legal obligations in the disputed waters of the South China Sea, and stressed U.S. commitments to its regional allies.

Xi said China would continue to safeguard its sovereignty and maritime rights in the South China Sea.

But China is keen to keep the summit focused on economic issues and to prevent other disputes from overshadowing it.

According to a "fact sheet" on China-U.S. relations issued on Sunday, the two sides agreed on a range of issues, including avoiding competitive currency devaluations and not limiting deal opportunities for foreign information and communication technology providers.

Obama, now in the last five months of his presidency, is using the visit to put a final stamp on his signature policy shift toward the Pacific, setting the tone for his White House successor, who will be elected in November and take office on January 20.

His visit began chaotically at the Hangzhou airport, where his staff argued with Chinese security over media access. Obama said on Sunday he "wouldn`t over-crank the significance" of the airport events.

"None of this detracts from the broader scope of the relationship (with China)," he told a news conference. "The bilateral discussions that we had yesterday were extremely productive and continue to point to big areas of cooperation."

Security was extremely tight in Hangzhou, with parts of the city of 9 million people turned into a virtual ghost town as China seeks to ensure that the G20 summit stays incident-free.