International trade makes up almost half of global economic output and officials said the issue could be revisited at a meeting of G20 leaders in July. 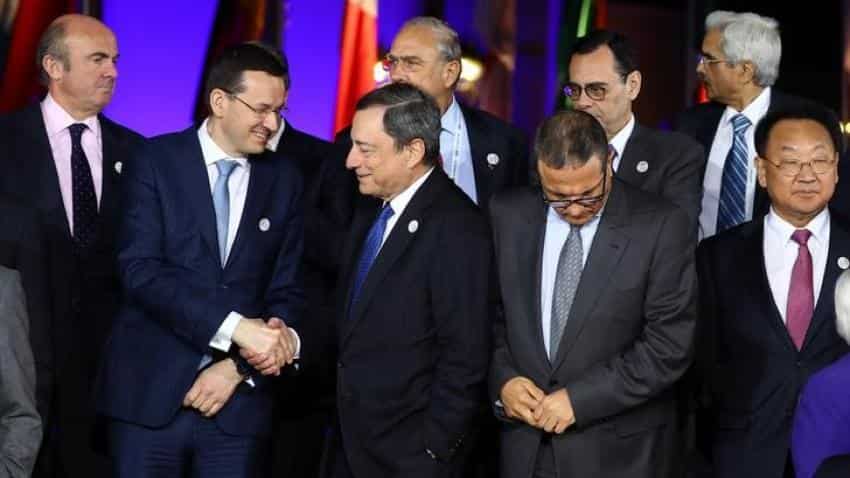 Others suggested that the G20 leaders` meeting could be the real opportunity to bring the US on board. Photo: Reuters
Written By: Reuters
RELATED NEWS

G20 finance ministers agree to push ahead with digital tax

Financial leaders of the world`s biggest economies dropped a pledge to keep global trade free and open, acquiescing to an increasingly protectionist Unites States after a two-day meeting failed to yield a compromise.

Breaking a decade-long tradition of endorsing open trade, G20 finance ministers and central bankers made only a token reference to trade in their communique on Saturday, a clear defeat for host nation Germany, which fought the new US government`s attempts to water down past commitments.

In the new US administration`s biggest clash yet with the international community, G20 finance chiefs also removed from their statement a pledge to finance the fight against climate change, an anticipated outcome after US President Donald Trump called global warming a "hoax".

In a meeting that some said was at times 19 against one, the US did not yield on key issues, essentially torpedoing earlier agreements as the G20 requires a consensus. Still, the dialogue was friendly and non-confrontational, leaving the door open to a future deal, officials who attended the meeting said.

"This is my first G20, so what was in the past communiqué is not necessarily relevant from my standpoint," US Treasury Secretary Steven Mnuchin said in the German resort town of Baden Baden.

"I understand what the president`s desire is and his policies, and I negotiated them from here," Mnuchin said. "I couldn’t be happier with the outcome."

Seeking to put "America first", Trump has already pulled out of a key trade agreement and proposed a new tax on imports, arguing that certain trade relationships need to be reworked to make them fairer for US workers.

International trade makes up almost half of global economic output and officials said the issue could be revisited at a meeting of G20 leaders in July. While some expressed frustration, like French Finance Minister Michel Sapin, others played down the dispute.

"It is not that we were not united," German finance minister Wolfgang Schaeuble said. "It was totally undisputed that we are against protectionism. But it is not very clear what (protectionism) means to each (minister)."

He added that some ministers did not have a full mandate to negotiate since they were not fully in charge of trade issues. Others suggested that the G20 leaders` meeting in Hamburg this July could be the real opportunity to bring the US on board.

"It is not the best meeting we had, but we avoided backtracking," EU Economic Affairs Commissioner Pierre Moscovici said. "I hope in Hamburg the wording will be different. We need it. It is the raison d’etre for the G20," Moscovici said.

The communique also dropped a reference, used by the G20 last year, on the readiness to finance measures against climate change as agreed in Paris in 2015, because of opposition from the United States and Saudi Arabia.

Trump has suggested global warming was a "hoax" concocted by China to hurt US industry and vowed to scrap the Paris climate accord aimed at curbing greenhouse gas emissions.

Trump`s administration on Thursday proposed a 31% cut to the Environmental Protection Agency`s budget as the White House seeks to eliminate climate change programmes and trim initiatives to protect air and water quality.

Asked about climate change funding, Mick Mulvaney, Trump`s budget director, said on Thursday: "We consider that to be a waste of money."

The G20 did, however, show continuity in its foreign exchange policies, using past phrases on currency markets.

"We reaffirm our previous exchange rate commitments, including that we will refrain from competitive devaluations and we will not target our exchange rates for competitive purposes," the G20 said.

G20 finance ministers agree to push ahead with digital tax