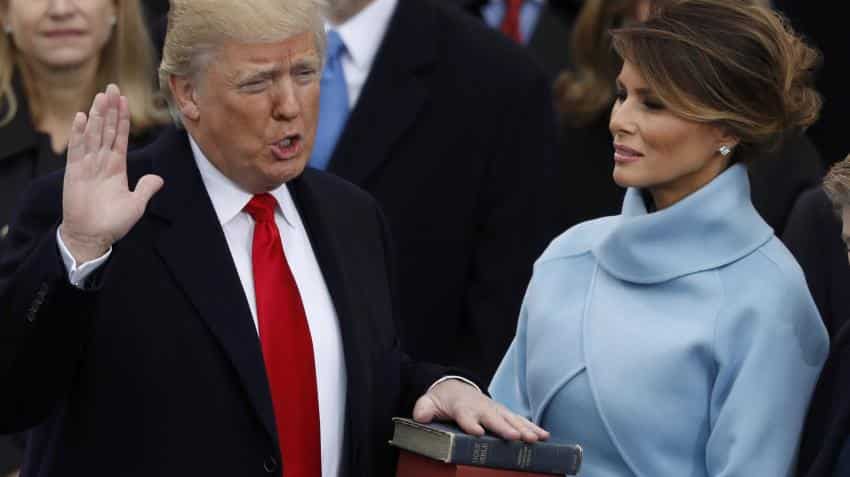 Donald Trump takes the oath of office as his wife Melania holds a bible during his inauguration as the 45th president of the United States on the West front of the U.S. Capitol in Washington. Image Source: Reuters
Written By: ZeeBiz WebTeam
RELATED NEWS

As Donald Trump was sworn in as the 45th president of the United States on Friday, he immediately started signing deals after taking over from his predecessor, Barack Obama.

Trump pledged to end what he called an ‘American carnage’ of rusted factories and crime in his inaugural address.

He said that American workers have been devastated by the outsourcing of jobs abroad and he would put an end to ‘social and economic woes’ in the country.

Here are five things that the new president did as soon as he entered the White House.

1. Quits Asia trade pact:
The new U.S. administration of President Donald Trump released a statement from the White House on Friday after the inauguration that said its trade strategy ‘to protect American jobs’ would start with withdrawal from the 12-nation Trans-Pacific Partnership (TPP) trade pact.

A report by Reuters quoted the statement that said "crack down on those nations that violate trade agreements and harm American workers in the process."
In place of the TPP, the statement said that Trump was committed to renegotiating another trade deal, the North American Free Trade Agreement (NAFTA), which was signed in 1994 by the United States, Canada and Mexico.

"For too long, we’ve been held back by burdensome regulations on our energy industry," the website said in a page titled "An America First Energy Plan", IANS report said.

The update claimed that lifting these restrictions will "greatly help American workers, increasing wages by more than $30 billion over the next seven years."

The executive order also included the enforcement of penalty for people who fail to carry the health insurance that the law requires of most Americans.
The order that was signed in the Oval Office by Trump directed agencies to grant relief to every one of the constituencies affected by the sprawling 2010 health-care law: insurers, hospitals, doctors, pharmaceutical companies and states.

4. Trump confirms first cabinet nominations:
The U.S. Senate confirmed the first two members of President Donald Trump`s cabinet on Friday as soon as he was signed in as commander and chief, a report by Reuters said.

The cabinet nominations were of two retired four-star Marine generals, James Mattis and John Kelly as his secretaries of defence and homeland security.
“The Senate also voted 89-8 to clear the way for a vote on Monday on another member of Trump`s national security team, Republican U.S. Representative Mike Pompeo, his nominee to be director of the Central Intelligence Agency,” the Reuters’ report said.

The statement, posted on the White House website within minutes of Donald Trump`s inauguration, did not provide details on whether the system would differ from those already under development, its cost or how it would be paid for.