Federal Reserve on hold but next move may be rate cut, says Kashkari

Neel Kashkari, who rotates into a voting spot on the Fed`s policy-setting panel this year, has been among the most dovish of the Fed`s 17 policymakers, pushing for steeper rate cuts last year than he and his colleagues actually delivered. 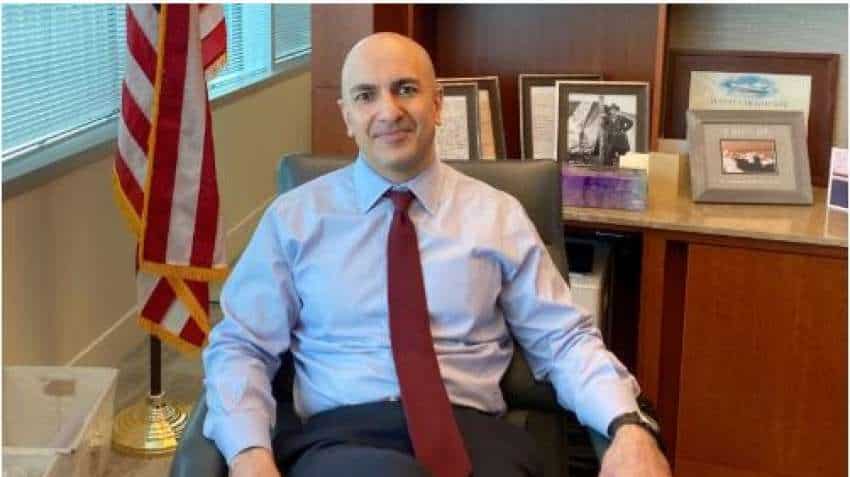 Neel Kashkari said on Friday, the facility will only be useful if banks don`t have to pay much extra, if anything, to use it. Photo: Reuters
Written By: Reuters
RELATED NEWS

US monetary policy is in a holding pattern for now, but the Federal Reserve`s next move may well be to cut interest rates given signs the economy may be weakening, Minneapolis Federal Reserve Bank chief Neel Kashkari told Reuters on Friday.

"The fact that job growth appears to be more muted and wage growth is slowing doesn`t tell me we are running out of workers, it tells me the underlying economy is slowing," Kashkari said in an interview in his office at his bank`s headquarters, citing a report from the U.S. Labor Department earlier in the day. "If I were to guess the next rate move, my guess (on) the balance of risks, is that it will be down and not up."

Kashkari, who rotates into a voting spot on the Fed`s policy-setting panel this year, has been among the most dovish of the Fed`s 17 policymakers, pushing for steeper rate cuts last year than he and his colleagues actually delivered.

But with the Fed`s current target range for short-term borrowing costs now at 1.5% to 1.75%, and most policymakers on board with keeping rates there through the end of 2020, Kashkari has made his peace with policy, for now.

"I think we are on pause for the foreseeable future," he said. "Are we providing much accommodation? Probably a little bit. Could it be that we should be providing more? Yeah, I could make that argument. But I`m comfortable where we are now."

With the Fed on hold amid low inflation and a still-growing economy, policymakers are focusing on two other issues in the near term: how best to ensure banks have enough short-term liquidity so their cash needs don`t weaken the Fed`s control over rates, and how best to safeguard the Fed`s ability to keep the economy on an even keel in a world where inflation, growth and interest rates are more subdued than in the past.

Last fall an unexpected spike in short-term rates forced the Fed to do an about-face on its balance sheet, which it had been systematically shrinking. It began injecting billions of dollars into the so-called repo market that banks tap for funding in order to insulate its own policy rate from swings caused by banks` cash needs. And it has been buying $60 billion a month in U.S. Treasury bills to build its balance sheet back up so as to better accommodate those needs.

Kashkari said Friday he`s among those at the Fed who support creating a standing repo facility that could make it easier for banks to trade in their Treasuries for cash. Creating what he called a "ceiling facility" for banks` short-term borrowing needs would allow the Fed to hold a smaller portfolio of securities, he said. Dallas Fed President Robert Kaplan told Reuters Thursday he too supports such a facility.

But, Kashkari said Friday, the facility will only be useful if banks don`t have to pay much extra, if anything, to use it.

Kashkari also weighed in on the Fed`s ongoing framework review, under which it is considering whether it might change the way it targets inflation so that any period of low inflation would be offset by an equal period of high inflation.

Though initially a supporter of a formal average inflation target, Kashkari said he thinks it could do more harm than good if the economy goes into a sharp downturn.

The Fed`s best approach, Kashkari said Friday, may be to simply stick to its current 2% inflation target, but to react just as forcefully when inflation sinks below the target as it does when it surges above.