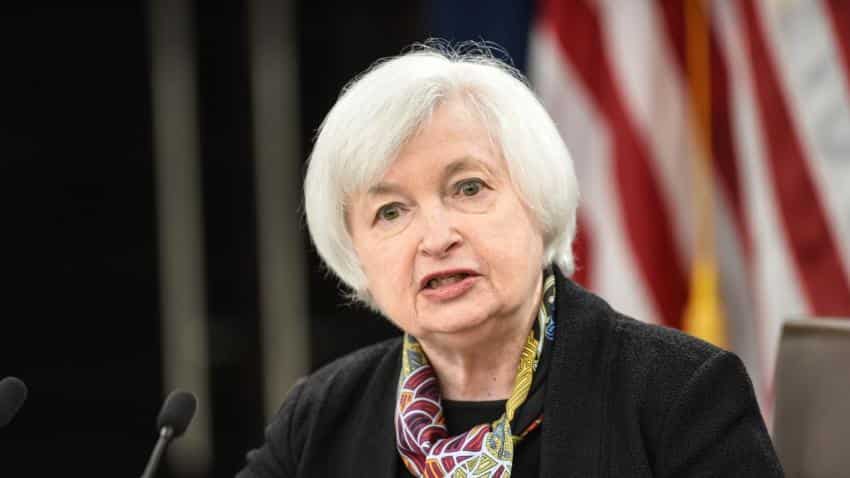 As the U.S. Congress moved closer to a tax overhaul plan Wednesday that has President Donald Trump "thrilled", outgoing Federal Reserve Chair Janet Yellen gave a more sobering assessment: a short-term bump is likely, but a longer-term boost is not.

Nearly all Fed officials are factoring in some stimulus from the package, expected to deliver deep cuts to the taxes companies pay and reductions to the taxes owing from some households. Fresh forecasts show policymakers expect growth next year of 2.5 percent, up from a view of 2.1 percent just a few months ago.

But growth will then ease back to about 2 percent by 2020, policymakers project, not rise to close to 3 percent as Trump and his administration assert.

The predictions suggest the U.S. central bank is taking a wait-and-see approach to Trump`s signature economic policy and his first major legislative victory since he was elected.

“My colleagues and I mainly see the likely tax package as boosting aggregate demand but also having some potential to boost aggregate supply," Yellen said in her last press conference as Fed Chair.

Yellen was appointed Fed Chair by former President Barack Obama and Trump has chosen to replace her with his own nominee Jerome Powell, who will likely take office early next year.

"In terms of aggregate supply effects, a stronger pace of investment could boost capital formation and thereby raise productivity growth and potential GDP or output to some extent; exactly how large those effects might be remains uncertain, but that is a channel.”

In other words, the Fed does expect the tax plan to put more spending money in people`s pockets, as Republicans promise, but whether the package will also will spur companies to invest in production is less clear.

If that does happen, it would be a "welcome" development, Yellen said. But policymakers` forecasts, and Yellen`s comments, suggest that is not the Fed`s main takeaway.

"We continue to think as you can see from the projections that a gradual path of rate increases remains appropriate even with almost all participants now factoring in their assessment of the impact of the tax policy," Yellen said.

FED ADJUSTS RATE PATH MODESTLY
Policymakers now believe a slightly steeper path of rate hikes will be needed over the course of the next three years although they do not see a sharp spike in inflation, nor an aggressive growth pickup.

"The Federal Reserve is not buying the growth forecasts the administration is selling. Not in the long run anyway," said Chris Rupkey, chief financial economist at MUFG Union Bank.

Republicans said on Wednesday they had reached a deal for a debt-financed package of deep tax cuts for businesses and the wealthy and a mixed bag of results for middle-class Americans.
Nearly half of Americans oppose the plan, and congressional researchers have estimated it would add $1 trillion to $1.5 trillion to the national debt over 10 years.

The Treasury endorsed the plan with a one-page analysis this week projecting it would help boost economic growth to 2.9 percent annually over the next decade.

The nonpartisan Tax Policy Center, whose analysis Yellen repeatedly referenced in her news conference, estimated the Senate`s version of the bill would boost GDP by 0.7 percent in 2018 but have little effect in the decade ahead.