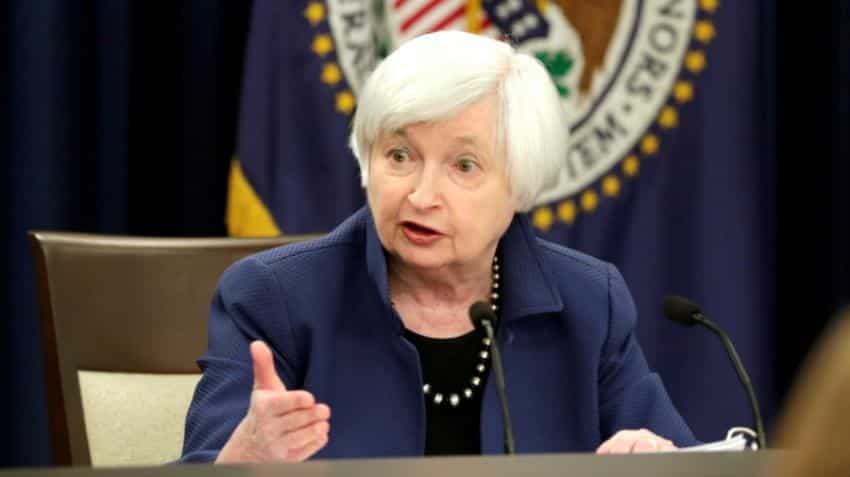 The Federal Reserve raised interest rates on Wednesday for the second time in three months, citing continued U.S. economic growth and job market strength, and announced it would begin cutting its holdings of bonds and other securities this year.

The decision lifted the U.S. central bank`s benchmark lending rate by a quarter%age point to a target range of 1.00% to 1.25% as it proceeds with its first tightening cycle in more than a decade.

In its statement following a two-day meeting, the Fed`s policy-setting committee indicated the economy had been expanding moderately, the labour market continued to strengthen and a recent softening in inflation was seen as transitory.

The Fed also gave a first clear outline on its plan to reduce its $4.2 trillion (3.28 trillion pounds) portfolio of Treasury bonds and mortgage-backed securities, most of which were purchased in the wake of the 2007-2009 financial crisis and recession.

"The committee currently expects to begin implementing a balance sheet normalization programme this year, provided that the economy evolves broadly as anticipated," the Fed said in its statement.

The central bank said it would gradually ramp up the pace of its balance sheet reduction and anticipates the plan would feature halting reinvestments of ever-larger amounts of maturing securities.

U.S. stocks rose after the Fed announcement, while the dollar reversed some of its earlier losses.

"The Fed announcing an update to their reinvestment principles leaves September open. The start of balance sheet runoff and the fact that they haven`t slowed their projected path of rate hikes suggest they can do both balance sheet and rate hikes at the same time," said Gennady Goldberg, interest rate strategist at TD Securities.

The Fed has now raised rates four times as part of a normalization of monetary policy that began in December 2015. The central bank had pushed rates to near zero in response to the financial crisis.

Policymakers also released their latest set of quarterly economic forecasts which showed temporary concern about inflation and continued confidence about economic growth in the coming years.

They forecast U.S. economic growth of 2.2% in 2017, an increase from the previous projection in March. Inflation was expected to be at 1.7% by the end of this year, down from the 1.9% previously forecast.

A retreat in inflation over the past two months has caused jitters among some Fed officials who fear that the shortfall, if sustained, could alter the pace of future rate hikes. Earlier on Wednesday, the Labor Department reported consumer prices unexpectedly fell in May, the second drop in three months.
The Fed`s preferred measure of underlying inflation has retreated to 1.5%, from 1.8% earlier this year, and has run below the central bank`s 2% target for more than five years.

Expectations of any fiscal stimulus in the near term from the Trump administration have also waned with campaign promises on tax cuts, regulation rollbacks and infrastructure spending either still on the drawing board or facing hurdles in Congress.

Interest rates are seen rising one more time by the end of this year, according to the median projection of the forecasts released with the Fed`s policy statement, in keeping with the previous forecast.

Estimates for the unemployment rate by the end of this year moved down to 4.3%, the current level, and to 4.2% in 2018, indicating the Fed believes the labour market will continue to tighten.

The median estimate of the long-run neutral rate, which is seen as the level of monetary policy that neither boosts nor slows the economy, was unchanged at 3.0%.