Airbus led the anonymous jetliner haul with almost 200 orders worth $24 billion at list prices, while Boeing said it had signed provisional deals with four unnamed customers for a total of 94 planes worth almost $11 billion at catalogue prices. 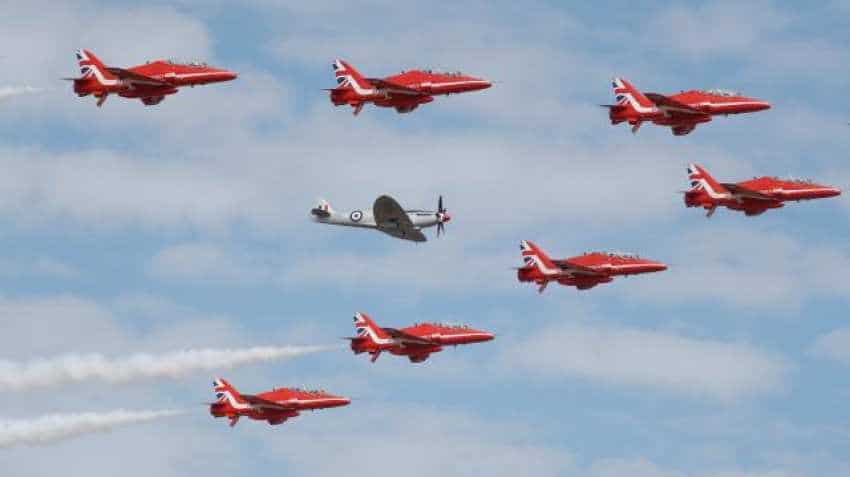 The Farnborough Airshow is typically one of the world`s most publicity-focused business events. Image source: Reuters
Written By: Reuters
RELATED NEWS

The Farnborough Airshow is typically one of the world`s most publicity-focused business events, with plane giants and airline bosses battling to win headlines for deals signed under the roar of stealth fighter displays.

Not so this week, when Airbus and Boeing announced almost 300 orders from unnamed buyers, reversing the PR rulebook.

Airbus led the anonymous jetliner haul with almost 200 orders worth $24 billion at list prices, while Boeing said it had signed provisional deals with four unnamed customers for a total of 94 planes worth almost $11 billion at catalogue prices.

Airbus declined to discuss the identity of the buyers, but industry sources said its list was dominated by Chinese-related leasing companies.

Chief Commercial Officer Eric Schulz linked the reticence to global trade tensions, telling analysts some Asian customers had asked Airbus not to fan growing disputes. "Undisclosed or disclosed, either way the order is there," he said.

"If that is enough to make airline customers want anonymity, what might they do if the trade disputes were to escalate?," Jefferies analyst Sandy Morris commented in a note.

Several top delegates cautioned against overstating the link with trade tensions, however. Numerous factors are at play when deciding when to reveal order plans, such as waiting for board or government approvals, they said.

Winning the air show competition also has something to do with the sequence of announcements, two industry sources said. Airbus is behind Boeing in the race for orders this year.

Airbus listed orders for 80 A320neo narrowbody jets from an unidentified leasing company, another for 100 similar narrowbody aircraft, plus 14 large jets - eight A350-900 and six A330neo.

On Tuesday, Reuters reported that the first order for 80 aircraft came from China`s ICBC Leasing.

An Avolon spokesman said: "We are in constant dialogue with (manufacturers) and when we have an order to announce we will do that."

Airbus is currently tackling payment delays from HNA Group which led to a backlog of undelivered wide-body A330 jets, first reported by Reuters last week.

One has been delivered and others are expected to follow.

Avolon is owned by HNA vehicle Bohai Leasing and made changes in its bond structure earlier this year to insulate itself from the parent group`s financial difficulties.

Avolon CEO Domhnal Slattery told Reuters this week those measures were working smoothly, but did not discuss order plans.

Planemakers often strike deals during the rest of the year with customers shy about disclosing their identity, especially in countries like China with complex approval processes.

But when opting to announce at an air show, buyers are usually keen to promote their plans and firms like Airbus and Boeing invest in lavish facilities with space for briefings.

Some high-profile orders did get announced on Wednesday with Boeing bagging a provisional 100-plane order from budget carrier VietJet and Airbus confirming an order from Mexico`s VivaAerobus after Reuters reported the two sides were negotiating a deal.

Market sources did not rule out a headline-grabbing finale.

AirAsia boss Tony Fernandes has left Farnborough in suspense over whether he would fly in from Malaysia to confirm an order for Airbus A330neo planes or defect to the Boeing 787, though he said earlier this week he had "no plans" to make the trip.