Voter surveys show Macron winning next Sunday with 59-60 percent of the vote, and Le Pen`s plans to quit the EU and the euro are among the least popular policies in her protectionist, anti-immigration electoral platform. 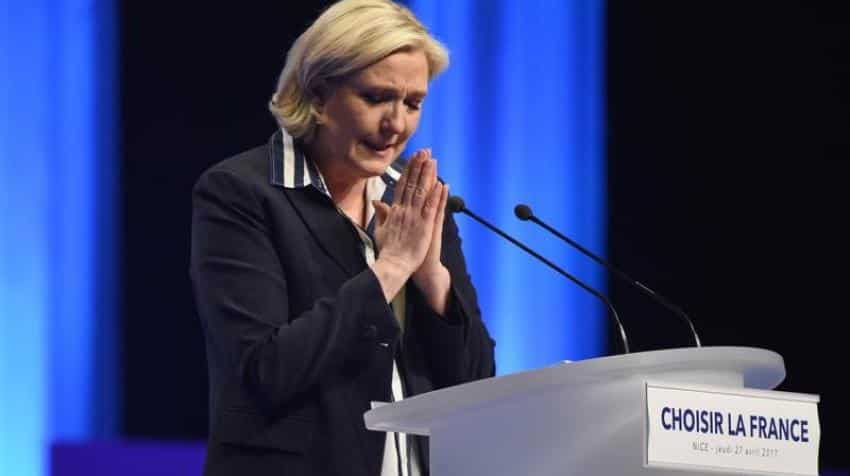 French presidential candidate Marine Le Pen renewed her attack on the European Union`s euro single currency on Sunday, a day after saying that ditching it might not be her top priority.

The National Front (FN) candidate has a week to overturn the opinion poll lead of pro-EU centrist Emmanuel Macron before the run-off vote between the two on May 7.

Voter surveys show Macron winning next Sunday with 59-60 percent of the vote, and Le Pen`s plans to quit the EU and the euro are among the least popular policies in her protectionist, anti-immigration electoral platform.

Analysts were not surprised on Saturday, therefore, when a new FN policy document pushed ditching the euro down the list of her priorities. They said it was in part aimed at older voters who might be worried about the potential impact on the value of their pensions of a reutrn to the franc.

"She needs the votes of the over 60s who are terrified by the prospect of a euro exit," said Saxo Bank economist Christopher Dembik.

"This is a return to reality. The euro exit is pushed far into the future."

FN policy coordinator Jean Messiha concurred. "There was this fear expressed by a certain number of French people that Marine has understood," he told Reuters.

Despite the softening in her stance though, Le Pen made clear in a video published on newspaper Le Parisien`s website on Sunday that she was still intent on leaving the euro eventually.

She has repeatedly blamed the single currency for high unemployment in France, calling it a tool for Germany to subjugate other countries and saying that the rest of Europe had started to recognise this too.

"I think the euro is dead," she said in the video. "The euro isn`t viable, everyone has been saying it for years."

Le Pen went on to say that the euro`s likely demise was evident in signs that the European Central Bank (ECB) might soon start reducing the amount of money it pumps into the system through quantitative easing.

She did not explain the logic, which is at odds with the reasoning of economists and the ECB officials who say the expansionary monetary policy could end because the risks of deflation to the euro zone economy have retreated.

But she continued, "Do we wait for chaos? Do we wait for financial panic? Or do we get together among countries so that we can extricate ourselves from an experience that has been a failure?"

Le Pen has said that in government she would enter talks about radical change to the EU`s institutions, including reversing out of the currency union to re-establish national central banks and currencies.

She would then, after six months, call a referendum on France`s future in the EU, recommending a `Frexit` should she be unsatisfied with the outcome of the talks.

Messiha confirmed on Sunday that the six-month timetable was intact.

As well as softening on the euro exit timetable, Saturday`s policy document also raised the prospect of a transitional period similar to that used in preparation for monetary union, envisaging the `European common currency` regime which Le Pen has talked about before.

"The transition from the single currency to the European common currency is not a pre-requisite of all economic policy, the timetable will adapt to the immediate priorities and challenges facing the French government," the statement said.

"Everything will be done to ensure an orderly transition ... and the coordinated construction of the right for each country to control its own currency and its central bank."

Analysts say it is fanciful to try to reverse engineer the euro zone or undertake a `Frexit` without expecting a severe upheaval, and that the resilience of markets after Britain`s vote to leave the EU and Donald Trump`s election as president of the United States were no comfort.

"They (the FN) forget that these are two countries which have their own currency, which were not getting out of a single currency," said economist Ludovic Subran of Euler Hermes.

Le Pen also faces constitutional barriers to Frexit even if she does become president, because she is expected to fall well short of a parliamentary majority in June`s legislative elections.

EU membership is written into France`s constitution and a move to change it would require first the approval of both the National Assembly and the Senate and then either a referendum, or approval from a three-fifths majority in Congress - a combined sitting of both houses of parliament.