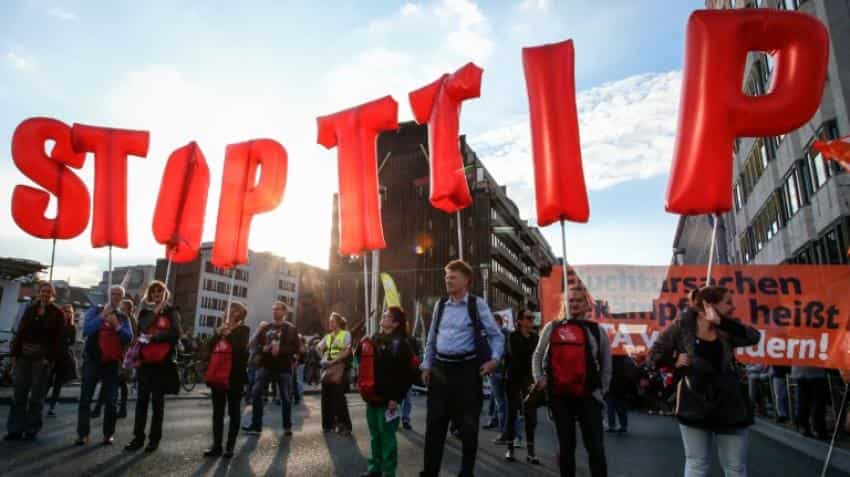 European trade ministers scramble on Friday to salvage talks on a massive free trade deal with the US amid growing calls in key powers France and Germany to abandon negotiations.

Ministers from the European Union's (EU) 28 member states meeting in Bratislava will attempt to patch over deep differences after tens of thousands of demonstrators thronged European cities this week angrily calling for the EU to walk away from the US accord.

Defending free trade deals has become increasingly fraught for leaders, with the rise of populists such as US presidential candidate Donald Trump blaming globalisation for stolen jobs and falling wages.

Also under fire in the Slovak capital is a trade deal with Canada that opponents say is an attempt to set a dangerous precedent before completing the much bigger accord with the US.

On its last gasp is the Transatlantic Trade and Investment Partnership (TTIP)-- a free trade deal between the European Union (EU) and United States (US) which would create the world's biggest market of 850 million consumers stretching from Hawaii to Lithuania.

But the deal, under negotiation since 2013, has become a hot potato as key elections approach in the United States (US), France and Germany, with the goal of sealing the agreement by the end of the Obama administration all but abandoned.

TTIP "becomes less and less likely as time goes on," said Cecilia Malmstroem, the EU commissioner for trade who will be in Bratislava.

"There will a treaty with the US but maybe after a natural pause to give time to a new administration," Malmstroem told RTBF radio in Belgium.

There are deep-seated fears in Europe that the deal would undercut the 28-nation bloc's standards in key areas such as health and welfare.

TTIP is most firmly opposed by France, where Trade Minister Matthias Fekl said the socialist government no longer supports continuing negotiations and urges Europe to walk away.

Fekl complains that the US side has failed to offer anything "serious," especially on sensitive issues such as protecting geographical labelling for renowned farm products, including Champagne or Roquefort cheese.

In Germany, TTIP has split the ruling coalition, with Chancellor Angela Merkel still the treaty's biggest backer in Europe but her socialist partners, led by Vice-Chancellor Sigmar Gabriel, dead set against it.

Hopes remain for CETA, however, the deal with Canada that has already been negotiated, but it has had to overcome unexpected hurdles in Germany, where Gabriel's socialists put up last minute resistance.

Similar opposition has flared up in Austria and Belgium, but ministers backing the deal hope to greenlight the treaty so that it can be signed with Canadian Premier Justin Trudeau at an EU-Canada summit on October 27.

CETA would then go on for ratification in national and regional parliaments across the EU, a tricky and likely time consuming process.

"The failure of CETA would be a huge challenge to our credibility in the world," said Markus Beyer, head of the EU's most powerful lobby, BusinessEurope.

"You simply will not find another place in the world that shares the same values to this degree," he added.

Fears of a failure of CETA have waned since German socialists narrowly backed the deal at a party conference last week.

This despite more than 160,000 demonstrators thronging seven major cities across Germany on Saturday. Thousands more protested outside EU headquarters in Brussels on Tuesday.