Tesla Inc revealed its self-driving plans during an investor day on Monday, with Chief Executive Elon Musk predicting the launch of an autonomous robotaxi service next year in some U.S. markets. 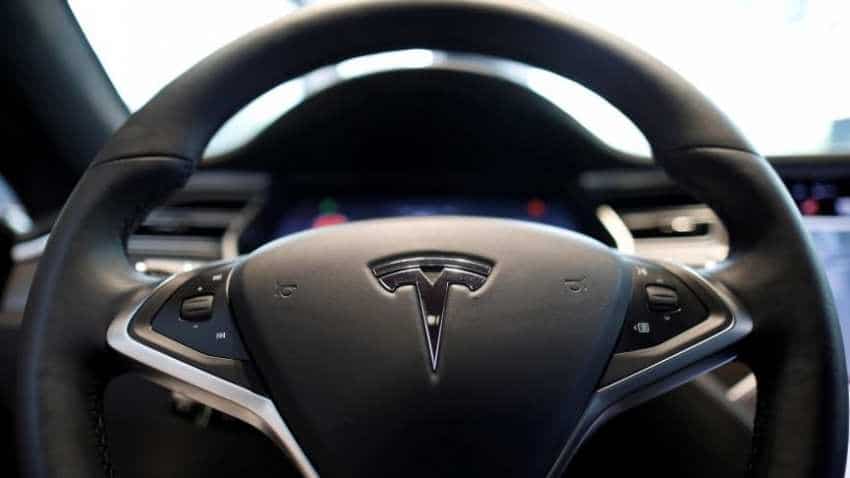 Tesla Inc revealed its self-driving plans during an investor day on Monday, with Chief Executive Elon Musk predicting the launch of an autonomous robotaxi service next year in some U.S. markets.  Musk has touted the electric car maker`s self-driving capabilities over the years, highlighting its semi-autonomous Autopilot system.

Tesla began offering a feature described as "Full Self-Driving Capability" in 2016. The company instructs drivers to keep their hands on the wheel when those systems are engaged, sparking some criticism of the term. Following are the comments made by Musk and Tesla related to the topic in the past few years, including during Monday`s event:
2019

April 22 - Musk predicts that Tesla will have autonomous robotaxis without drivers in some U.S. markets in 2020.

April 22 - Musk predicts that "probably two years from now we`ll make a car with no steering wheels or pedals."

April 22 - Musk says that in 2020, Tesla will have "over a million cars with full self-driving, software, everything."

April 22 - Musk says it is "financially insane to buy something other than a Tesla" today because Tesla is the only company to have a full self-driving suite of hardware.

April 15 – Musk says that buying a car that cannot upgrade to full self-driving is like "buying a horse instead of a car in 2019."

April 3 - Tesla says it is making "significant progress" in development of its autonomous driving software and hardware, including the FSD (Full Self-Driving) computer, saying the computer is in production and will enable full-self driving through over-the-air software updates in future.

Oct. 5 - Tesla introduces software version 9.0 with a number of features including `Navigate on Autopilot` – intended to guide a car from a highway`s on-ramp to off-ramp, including suggesting lane changes, navigating highway interchanges and taking exits that would still require driver supervision [http://bit.ly/2IFfMMN]

May 23 - Two U.S. consumer advocacy groups urge the Federal Trade Commission to investigate Tesla`s "deceptive and misleading" use of the name Autopilot for its assisted-driving technology

Feb. 2018 - Musk says Tesla can do a coast-to-coast autonomous drive in three months, six months at most

Oct. 19 - Musk says he expects that by the end of 2017 a Tesla would be able to drive in full autonomous mode from Los Angeles to New York "without the need for a single touch" on the wheel. (https://reut.rs/2Pk7RYI)]

Oct. 2016 - Tesla begins to sell a "Full Self-Driving Capability" option in its vehicles for $3,000, on top of the $5,000 price for "Enhanced Autopilot." Musk says full self-driving features will be rolled out in future via over-the-air updates when available. The option was removed in October 2018, then reinstated in February 2019.

Oct. 15 – Tesla launches an advanced driver assistance system called Autopilot, with Musk cautioning that drivers should keep their hand on the wheel.