(Reuters) - Eight people, including at least six Asian women, were shot dead at a massage parlor and two day spas in the Atlanta area on Tuesday, and a man suspected of carrying out all of the attacks was arrested hours later in southern Georgia, police said. 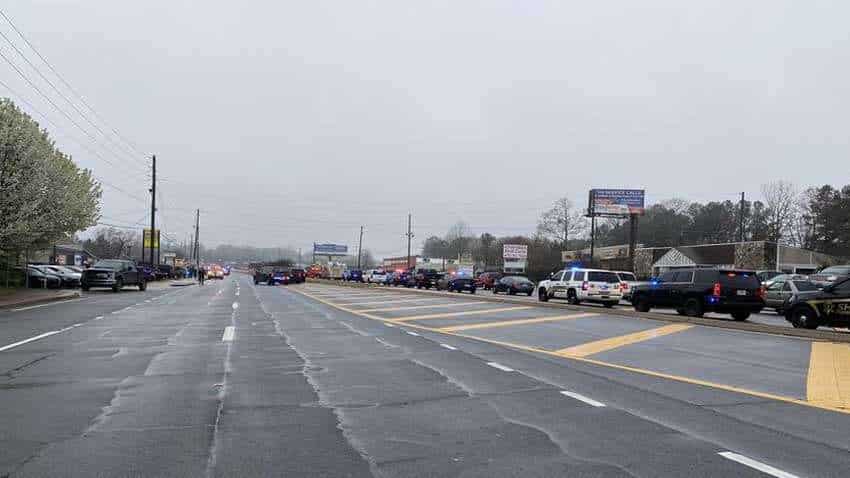 (Reuters) - Eight people, including at least six Asian women, were shot dead at a massage parlor and two day spas in the Atlanta area on Tuesday, and a man suspected of carrying out all of the attacks was arrested hours later in southern Georgia, police said.
Four victims were killed and another was wounded in a shooting at about 5 p.m. local time at Young`s Asian Massage in Cherokee County, about 40 miles north of Atlanta, said Captain Jay Baker of the Cherokee County Sheriff`s Department.

Two women of Asian descent were among the dead, along with a white woman and a white man, Baker said, adding that the surviving victim was an Hispanic man.
In Atlanta, the state capital, police officers responding to a call of a "robbery in progress" shortly before 6 p.m. arrived at a beauty spa to find three women shot dead, Police Chief Rodney Bryant told reporters.
While investigating the initial shooting report the officers were called from a second spa across the street where a fourth woman was found dead of a gunshot wound, Bryant said. All four victims slain in Atlanta were of Asian descent.
Robert Aaron Long, 21, of Woodstock, Georgia, in Cherokee County, was taken into custody at about 8:30 p.m. in Crisp County, Georgia, about 150 miles (240 km) south of Atlanta.
Baker said investigators were "very confident" that the same suspect was the gunman in all three shootings.
Law enforcement officials did not offer a possible motive for the shooting rampage, and said they did not immediately know if the victims were targeted because of their race or ethnicity.
The violence unfolded days after U.S. President Joe Biden used a nationally televised speech to condemn a recent surge in hate crimes and discrimination against Asian-Americans. Civil rights groups have suggested that former President Donald Trump contributed to the trend by repeatedly referring to the coronavirus as the “China virus” because it first emerged there.
A spokesman for the Atlanta field office of the Federal Bureau of Investigation said the agency was assisting police in Cherokee County and Atlanta.