Donald Trump to migrants: We can't take you anymore

US President Donald Trump paid a visit to the US-Mexico border on Friday, following a week of confusing comments over whether he`d shut it down. 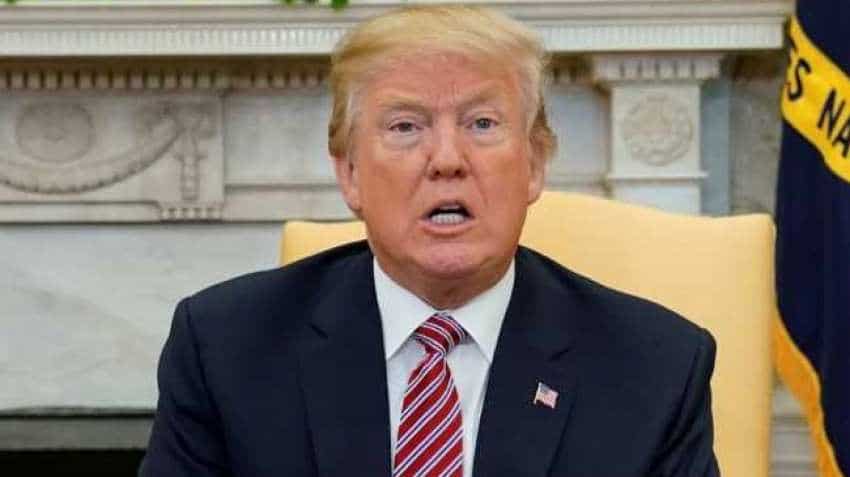 During the roundtable, Donald Trump said the immigration system is full, regardless of whether the individuals seeking to come into the US are seeking asylum or not, according to a report. Image source: Reuters
Written By: IANS
RELATED NEWS

US President Donald Trump paid a visit to the US-Mexico border on Friday, following a week of confusing comments over whether he`d shut it down. The President stopped in Calexico, California, on Friday afternoon to tour replacement border fencing and participate in a border security roundtable. According to the Arizona Republic, the two-mile stretch replacement barrier he`ll see was authorised prior to when he came into office, but a plaque on the bollards calls it "the first section of President Trump`s border wall."

During the roundtable, Trump said the immigration system is full, regardless of whether the individuals seeking to come into the US are seeking asylum or not, CNN reported. "The system is full. We can`t take you anymore. Whether it`s asylum. Whether it`s anything you want. It`s illegal immigration," Trump said. "Can`t take you anymore ... I`m sorry. So turn around. That`s the way it is."

He also repeated his claim asylum seekers were perpetrating a hoax on the US. "They have lawyers greeting them. They read what the lawyer tells them to read. They`re gang members and they say `I fear for my life,`" he said. "They`re the ones who are causing fear for life. It`s a scam, OK? It`s a scam. It`s a hoax. I know about hoaxes. I just went through a hoax," Trump said to laughter in the room. "So our system is full. We`re not taking them anymore."

The visit follows a series of threats Trump made calling for Mexico and Congress to shape up or face the closure of the southern border. The initial threat Trump issued last week was that he`d close down the southern border within a week if Mexico didn`t increase migrant apprehensions on its southern border, where Central American migrants seeking to move northward may eventually try to illegally enter the US.

The threat then evolved earlier this week when Trump began to push the responsibility from Mexico to Congress, after the White House began to claim that Mexico was doing more to stop border crossings and shifting its one-week ultimatum to an indefinite deadline.

But by Thursday, Trump`s demand morphed into a tariff threat. He said he`d give Mexico a one-year warning and potentially implement a 25 per cent auto tariff if the country didn`t stop the flow of illicit drugs being smuggled into the US. The tariffs, he suggested, would make a border closure unnecessary.

"I don`t think we`ll ever have to close the border because the penalty of tariffs on cars coming into the United States from Mexico, at 25 per cent, will be massive." Despite the clear pivot, Trump said on Friday ahead of his California departure that he "never changed his mind" about his threat to close the southern border.

"I never changed my mind at all. I may shut it down at some point, but I`d rather do tariffs," Trump told reporters. "The tariffs will work just like they`ve worked with steel," he said. The auto tariff, he added, "supersedes" the new US-Mexico-Canada Agreement on trade.

The President also said he`s "looking at an economic penalty on all the drugs that are coming in through the southern border and killing our people." However, further details on the potential economic penalties or the auto tariffs have yet to be announced by the Trump administration.

Trump, during Friday`s roundtable on the border, called his one-year warning on a southern US border closure "fake news."