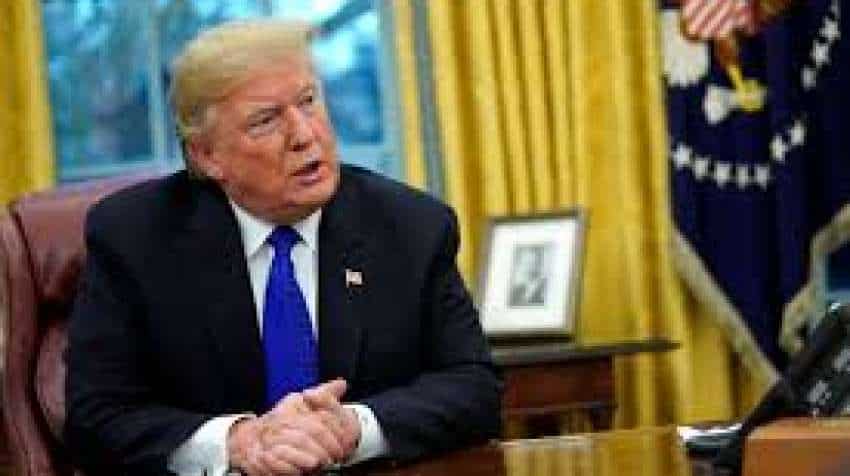 President took the dramatic step in a somber Oval Office speech as he battled to address the health and economic shocks to Americans: Source: Reuters
Written By: Reuters
Edited By: ZeeBiz WebTeam
RELATED NEWS

President Donald Trump on Wednesday imposed sweeping restrictions to prevent people from 26 European countries from traveling to the United States for a month as he responded to mounting pressure to take action against the spread of the coronavirus. In effect, this means imposing a ban on Europeans coming to the US.

The president took the dramatic step in a somber Oval Office speech as he battled to address the health and economic shocks to Americans from the sometimes fatal virus and responded to criticism he has not taken the threat seriously enough.

"This is the most aggressive and comprehensive effort to confront a foreign virus in modern history," he said.

"I am confident that by counting and continuing to take these tough measures, we will significantly reduce the threat to our citizens, and we will ultimately and expeditiously defeat this virus."

After triggering confusion by suggesting that “trade and cargo” from Europe would also be banned, Trump was forced to clarify his statement with a tweet moments after the speech that “trade will in no way be affected” by the travel restriction.

"The restriction stops people not goods," he said in the tweet.

US stock futures slid further as the president spoke, down more than 4% and signaling another day of losses awaits Wall Street.
Trump, whose re-election bid on Nov. 3 could hinge on how well he responds to a crisis that has suddenly enveloped his presidency, stopped short of declaring a national emergency.

The president used the Oval Office for the speech, a venue he has largely avoided in favor of free-wheeling, unscripted remarks elsewhere, and he did not appear entirely comfortable in the setting, reading through his speech quickly and uttering an expletive in an off-mic moment.

His goal was to show he is on top of the situation after facing criticism from Democrats for not moving quickly enough to provide coronavirus testing for Americans.

But he failed to mention other pressing issues such as accelerating the production of testing kits and face masks.

Trump pulled no punches in saying Europe was partly to blame for the virus` spread in the United States, where it has killed at least 37 people and infected 1,281.

His travel restrictions on Europe were similar to what he declared on travel from China earlier this year when the illness was spreading wildly there.

“The European Union failed to take the same precautions and restrict travel from China and other hot spots. As a result, a large number of new clusters in the United States were seeded by travelers from Europe," he said.

Trump signed an order that suspends the entry of most foreign nationals who have been in certain European countries at any point during the 14 days prior to their scheduled arrival to the United States.

The order did not apply to American citizens, legal permanent residents of the United States, immediate family members of U.S. citizens, and other individuals who are identified in the proclamation.

Trump said the restrictions will be adjusted subject to conditions on the ground.

The U.S. State Department issued a travel advisory on its website on Wednesday, advising U.S. citizens to reconsider travel abroad due to the global impact of the coronavirus outbreak.

As the U.S. stock market took another hit from the virus on Wednesday, Trump said he would take emergency action to provide financial relief for workers who are ill, quarantined or caring for others due to the illness.

He said he was instructing the Treasury Department to defer tax payments without interest or penalties for certain businesses and individuals affected.

Trump added he was also instructing the Small Business Administration to provide capital and liquidity to firms affected by the virus.