"We're signing a very comprehensive document, and we've had a really great time together, a great relationship," Trump said while signing the document along with Kim in the presence of media at the end of the summit - the first between a sitting US president and North Korea's top leader. It was unclear what the document was about but Trump said the public will find out soon. 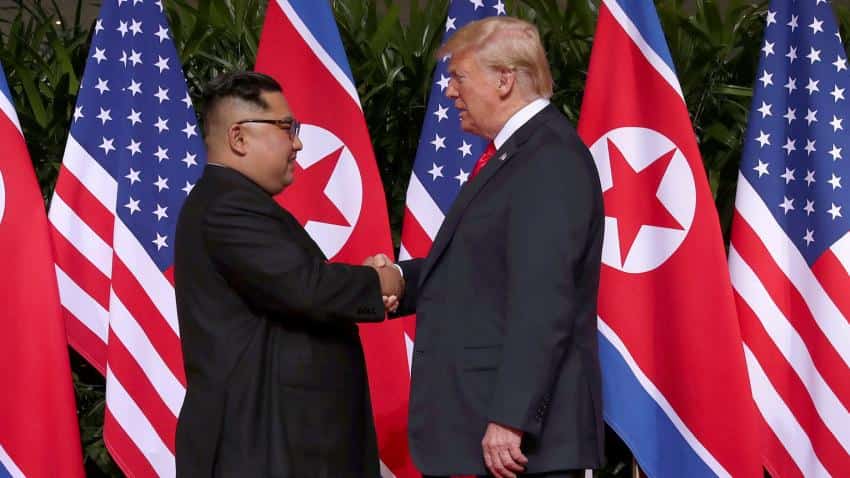 Donald Trump and Kim Jong-un signed a "very comprehensive" document after their historic summit today, with the US president saying that the process of denuclearisation on the Korean peninsula will begin "very soon" and the North Korean leader promising to leave the past behind.

The two leaders had a one-on-one meeting, with translators only, followed by an expanded meeting including their top aides and a working lunch at Capella Singapore hotel in Sentosa Island after months of diplomatic twists and turns.

"We're signing a very comprehensive document, and we've had a really great time together, a great relationship," Trump said while signing the document along with Kim in the presence of media at the end of the summit - the first between a sitting US president and North Korea's top leader.

It was unclear what the document was about but Trump said the public will find out soon.

In response to a question about denuclearisation, Trump said, "We're starting that process... Very quickly."

"We have decided to leave the past behind," Kim said through a translator, at the signing table. "The world will see a major change," he added.

Trump said he was very proud of what took place today and the two leaders would "take care of a very dangerous problem for the world."

The 71-year-old Trump said the summit worked out far better than expected and he's developed a "very special bond" with 34-year-old Kim.

He said Kim is "a very talented man" who "loves his country very much".

Trump said he "absolutely" will invite Kim to the White House.

As they exited the room, Trump and Kim patted each other on the back.

Earlier, the summit began with the two leaders meeting at the luxurious hotel.

They walked towards each other, stood face to face for the first time and shared a 12-second handshake against a backdrop of American and North Korean flags. They then appeared to share a few light-hearted words as they walked down a corridor to the hotel's library.

Trump and Kim are the first leaders of their respective countries to meet, marking the culmination of months of diplomatic wrangling and negotiations.

In brief remarks to the media before the start of their meeting, Trump hoped that the historic summit would be "tremendously successful."

Kim then said there were a number of "obstacles" to the meeting taking place in Singapore today.

"We overcame all of them and we are here today," he told reporters through a translator. Trump responded, "Thank you very much".

The two leaders held one-on-one meeting for around 45-minutes with just translators present.

According to North Korean media, Kim actually arrived at the venue 7 minutes earlier than Trump to show respect as it's cultural, the young one should arrive earlier than the elder one. The red tie that Trump wears may also show some respect to Kim as well, it's the colour that North Koreans like.

Kim was asked at least three times if he would give up his nuclear weapons. In response, he just smiled.

"There will be challenges ahead but we will work with Trump. We overcame all kinds of skepticism and speculations about this summit and I believe that this is good for the peace," Kim said.

After the delegation-level meeting, Trump joined Kim for a working lunch which had a mix of Western and Asian dishes, such as Korean stuffed cucumber and beef short rib confit with some Haagen-Dazs ice cream to top things off.

As the two men entered the room, photographs were taken, with Trump joking about wanting to get a "beautiful picture" in which he looked good.

The two leaders then took a post-lunch stroll in the courtyard of the hotel.

On the eve of the summit at Sentosa, the US had offered "unique" security guarantees to North Korea in return for a "complete, verifiable and irreversible" denuclearisation.

Sentosa is a popular tourist island a few hundred metres off the main island of Singapore.

The US insists it will accept nothing less than complete denuclearisation of the Korean peninsula.