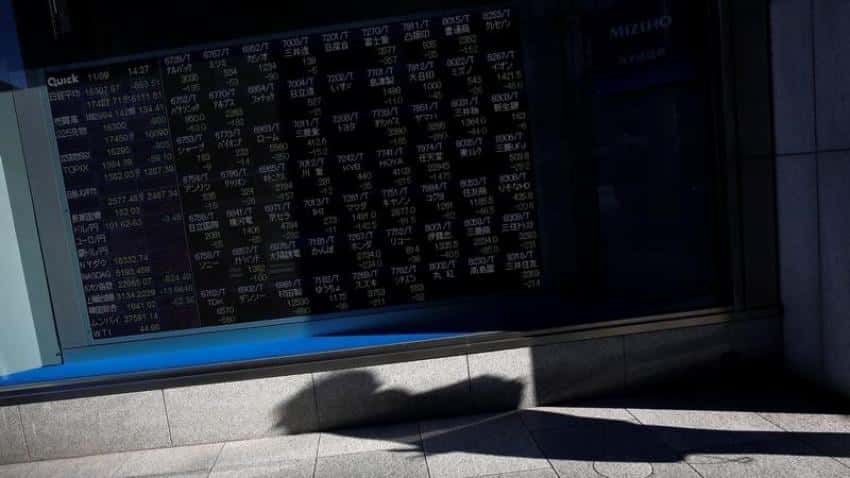 A pedestrian casts a shadow in front of an electronic stock quotation board outside a brokerage in Tokyo, Japan. Image Source: Reuters

The US dollar took a breather on Tuesday as global bonds steadied from their recent rout, while equities flatlined as political risk resurfaced in Europe ahead of a referendum in Italy this weekend.

Oil prices remained jittery in the countdown to Wednesday`s OPEC meeting but industrial commodities continued to benefit mightily from Chinese demand, both real and speculative.

The action in Asian stocks was guarded with Australia up 0.1% and Japan's Nikkei off 0.2%.

The cautious mood was set by Wall Street which suffered its worst performance in nearly a month as some investors booked profits in the financial and consumer discretionary sectors.

Worries about Italy`s banking system are building ahead of a December 4 referendum on constitutional reform, which could decide the political future of Prime Minister Matteo Renzi.

"Citi`s base case is for a NO vote to prevail with political uncertainties likely to remain elevated over the near-term," wrote analysts at Citi.

"It`s worth watching whether PM Renzi resigns in the event of a No vote as promised, before rushing into euro shorts."

The political risk kept the euro restrained despite the pullback in the dollar. The common currency was pinned at $1.0606, after failing to hold an 11-day high of $1.0686.

Dealers reported Japanese buying for the new month with orders today settling on December 1. Against a basket of currencies, the dollar held at 101.270 and not far from last week`s 14-year peak.

The greenback was still on track for its strongest two-month gain since early 2015, underpinned by expectations the US Federal Reserve is almost certain to hike interest rates next month.

Yields on two-year Treasury paper have already hit their highest since early 2010 in anticipation, greatly fattening its premium over European and Japanese debt.

In commodity markets, investors anxiously awaited an Organisation of Petroleum Exporting Countries (OPEC) meeting on Wednesday with none any wiser on whether producers will agree to lasting output cuts.

US crude was last off 25 cents at $46.83 a barrel, after seesawing wildly on Monday. Brent eased 28 cents to $47.96. Traders fear a major selloff should OPEC fail to reach a deal after so much wrangling.

Iron ore futures traded in China surged to their highest since early 2014 , while zinc touched a nine-year peak and lead a five-year top.

Closures of steel plants in China have tightened supply while Beijing has approved a string of massive infrastructure projects, including a $36 billion railway plan just this week.