Afghanistan itself is not on the list and Team Afghanistan`s robot, unlike its creators, has been allowed entry to the United States. Asked by Reuters on Tuesday why the girls were banned, a US State Department spokesperson cited regulations prohibiting the agency from discussing individual visa cases. 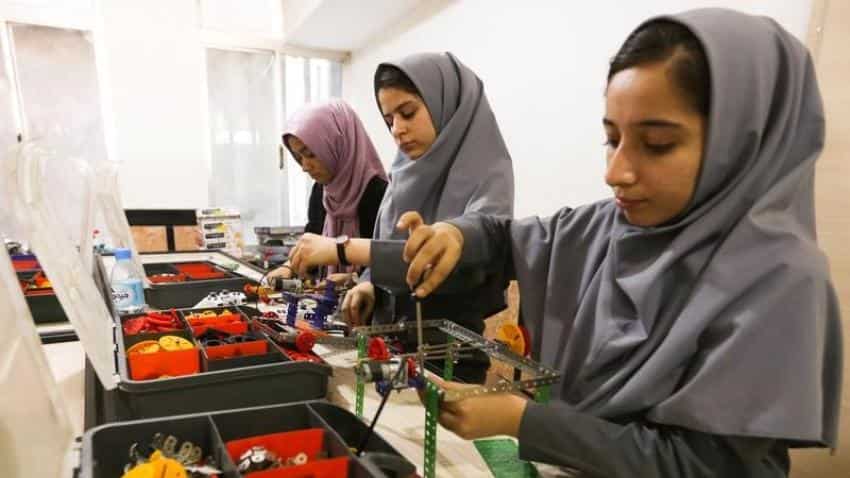 Members of Afghan robotics girls team which was denied entry into the United States for a competition, work on their robots in Herat province. Pic: Reuters
Written By: Reuters
RELATED NEWS

Two Afghan girls refused visas to the United States for a robot-building competition said on Tuesday they were mystified by the decision, as the contest`s organisers said teams from Iran and Sudan as well as a de facto Syrian team had gained visas.

The unusual story of the Afghan all-girl team of robotics students emerged as the United States grapples with the legality of President Donald Trump`s order to temporarily ban travel from six Muslim-majority countries.

Afghanistan itself is not on the list and Team Afghanistan`s robot, unlike its creators, has been allowed entry to the United States. Asked by Reuters on Tuesday why the girls were banned, a US State Department spokesperson cited regulations prohibiting the agency from discussing individual visa cases.

So the six team members will watch the ball-sorting machine compete in Washington D.C. via video link during the July 16-18 event from their hometown of Herat, in western Afghanistan, according to the FIRST Global contest organisers.

"We still don`t know the reason why we were not granted visas, because other countries participating in the competition have been given visas," said 14-year-old Fatemah Qaderyan, part of the team that made two journeys to the US Embassy in the Afghan capital Kabul to apply for their papers.

"No one knows about the future but ... we did our best and we hope that our robot could get a position along other robots from other countries," Qaderyan said.

Most of the female team members were either infants or not yet born at the time of the US-backed military intervention in Afghanistan in 2001 that toppled the Taliban regime – whose ultra-hardline interpretation of sharia (Islamic law) banned girls from school, women from working outside the home and all females from leaving home without a male relative.

More than 15 years later, around 10,000 US and allied international troops remain in Afghanistan to support an elected government in Kabul that constitutionally guarantees women`s rights but is increasingly losing ground to a Taliban insurgency that now controls or contests some 40 percent of territory.

Qaderyan`s teammate from Herat, 17-year-old Lida Azizi, was less forgiving of the US visa decision. "All of the countries can participate in the competitions, but we can`t. So it`s a clear insult for the people of Afghanistan," Azizi said.

FIRST Global`s president, Joe Sestak, said in a post on the organisation`s Facebook page that he was "saddened" by the US decision but the Afghan team would be able to connect with the competition via a live Skype video link.

"That is how we must now honour our fellow teammates, those brave girls from Afghanistan," he said.

He added that the teams of 156 countries – including from Iran and Sudan, which are on Trump’s list of countries whose citizens are banned from entry – had received their visas.

"The support of the US State Department (including its embassies) has been simply nothing short of amazing," Sestak said in the post, adding that one other team, from Gambia, had been also denied visas.

Also approved for visas was "Team Hope," a group of Syrian refugees, he said.

Syria is among the Muslim-majority countries named in Trump`s executive order prohibiting all citizens from entry for 90 days. The other countries, apart from Iran, Syria and Sudan, are Libya, Somalia and Yemen.

In a June 26 ruling, the US Supreme Court revived parts of Trump`s March 6 executive order that had been blocked by lower courts. The highest court let the ban go forward with a limited scope, saying that it cannot apply to anyone with credible "bona fide relationship" with a US person or entity.