In 2015, the Clintons made $1 million in charitable contributions, mostly to the Clinton Foundation; former President Bill Clinton brought in nearly $5.3 million in speaking fees. 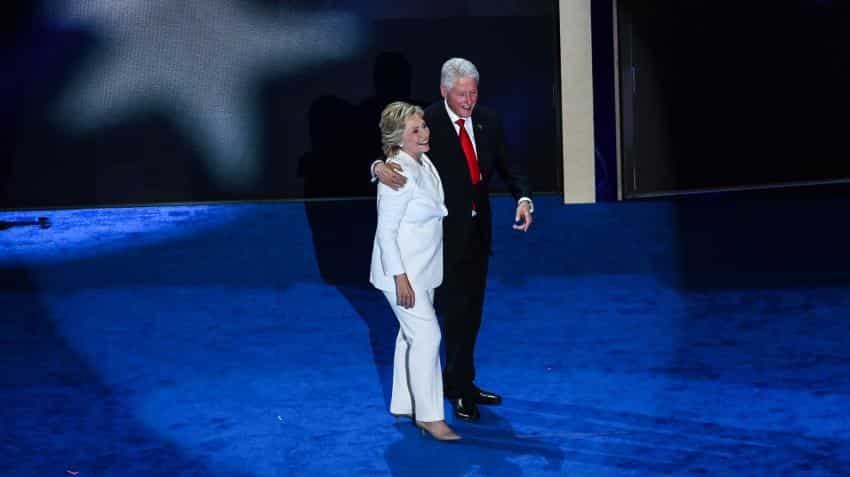 Hillary Clinton on Friday released her 2015 tax returns, which showed the Democratic presidential nominee and her husband had $10.75 million in income that year and paid an effective federal tax rate of 34.2%.

In 2015, the Clintons made $1 million in charitable contributions, mostly to the Clinton Foundation; former President Bill Clinton brought in nearly $5.3 million in speaking fees; and the former secretary of state reported income of $3 million from publisher Simon & Schuster for her book on her tenure at the State Department.

Clinton's running mate, US Senator Tim Kaine of Virginia, along with his wife, Anne Holton, released 10 years of tax returns. They paid a federal effective tax rate of 20.3% in 2015.

"Hillary Clinton and Tim Kaine continue to set the standard for financial transparency," Clinton campaign aide Jennifer Palmieri said in a statement. "In stark contrast, Donald Trump is hiding behind fake excuses and backtracking on his previous promises to release his tax returns."

It is customary for US presidential candidates to make their tax returns public, although they are not required by law to do so.

Clinton's tax returns have been made public, in some form, every year since 1977.

Trump, a New York businessman, and his lawyers have cited an audit by the Internal Revenue Service as a reason for his refusal to release his returns. Trump also has said his taxes are no one`s business and that they reveal little.

The IRS has said Trump can release his tax returns even while under audit.

On Thursday, Trump’s special counsel, Michael Cohen, told CNN he would not allow Trump to release them until the audits are complete.

Returns show business ties
Trump's critics, including 2012 Republican presidential candidate Mitt Romney and other fellow Republicans, have said his refusal raises questions about his net worth, his charitable contributions, his business dealings and various other ties, including with Russia.

Clinton has pounced on the issue, releasing an online video on Friday highlighting high-profile Republicans urging Trump to release his taxes. On Thursday, she raised the issue during an economic speech in Michigan.

"He refuses to do what every other presidential candidate in decades has done and release his tax returns," she told the crowd.

Politico has reported that Trump paid zero to very little taxes for two years in the 1990s, and a New York Times business columnist on Friday quoted a number of tax lawyers and accountants saying that could still be the case.

Federal tax rates have become an issue in the presidential election. Clinton has endorsed a rule named after billionaire investor Warren Buffett that would ensure those making more than $1 million a year pay a tax rate of at least 30%. President Barack Obama also backs the proposal.

At a Clinton rally last week in Omaha, Nebraska, Buffett, whose Berkshire Hathaway conglomerate is based there, challenged Trump to meet and exchange tax returns. Buffet said that he too was under IRS audit and Trump is "afraid" not of the tax-collection agency but of voters.

Clinton's campaign has released tax returns going back to 2007. The Clintons, who now live in Chappaqua, New York, paid an average effective federal tax rate of about 32% from 2007 to 2014 and an effective combined tax rate of approximately 40.5%.

The Clintons' 2015 return showed that, unlike most Americans, just $100 of their income came from wages. Their main investment was a low-cost index mutual fund, and the Clintons reported dividend and interest income of $109,000.