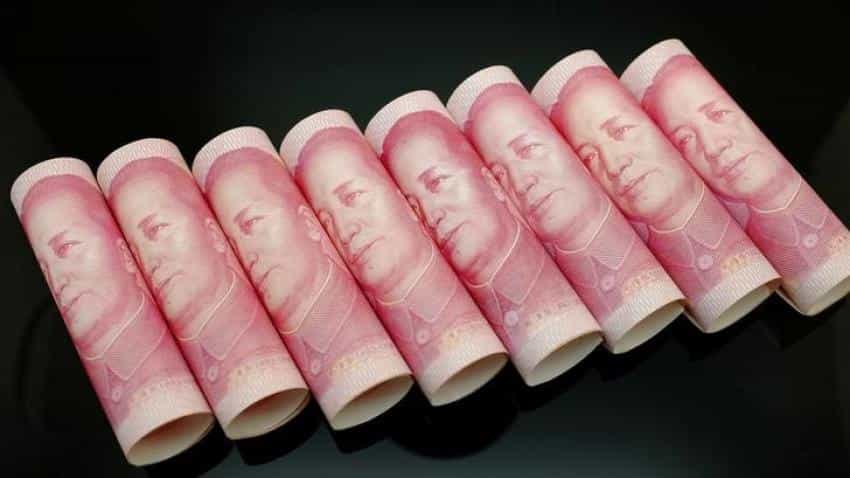 100 Yuan notes are seen in this illustration picture in Beijing. Image Source: Reuters

China`s money markets are bracing for a rough transition into 2017 as a traditional year-end cash deficit coincides with heavy capital outflows and a disruptive bond default that are creating sporadic cash shortages and ramping up counterparty risk.

Reports of brokerage Sealand Securities` default on a bond transaction with a bank couldn`t have come at a worse time, sowing distrust and wariness in a market that was already stressed. Sealand, which is being investigated by the securities regulator, said on Wednesday it will take responsibility for what it called forged bond agreements.

"The market is short of money. People are rushing to sell everything to get liquidity, from money market funds to corporate bonds to treasuries," said Gu Weiyong, chief investment officer at bond-focused hedge fund manager Ucom Investment Co. "It`s a turning point from bull to bear."

The yuan currency has fallen to levels last seen during the 2008 global financial crisis, 10-year bond yields have soared and Chinese treasury bond futures have been knocked down in an illiquid market.

Traders and fund managers expect little respite leading into the Lunar New Year holidays at the end of January, a period in which demand for cash is high.

Some fund managers even reckon the sell-off could turn as ugly as China`s stock market rout between June and August last year that also weighed on other emerging markets.

"We should raise our alert system to the level as high as during the equity market rescue campaign last year, and promptly enact our crisis management plan to fight the currency and financial wars," Wang Hongyuan, co-chairman of First Seafront Fund Management Co said in emailed comments.

As bond futures collapsed and banks stopped lending to non-banking firms in the wake of the Sealand news last week, financial magazine Caixin reported the People`s Bank of China (PBOC) had directed banks to resume lending.

"The market has some unspoken rules, and some people just broke them, leading others think the market is dangerous," a Shanghai-based trader at a Chinese bank said.

In 2014, authorities first allowed solar equipment producer Chaori Solar to default on bond interest payments before later bailing out local investors. This time, however, traders are unsure if authorities will rescue Sealand investors.

That`s because policy measures this year have aimed to cut leverage in the banking and corporate sectors, in particular via off-balance-sheet products.

Zhou worries that unless the Sealand episode is handled properly, the default could "trigger panic, and a breakdown of trust between institutions".

Market expectations around the PBOC`s cash management are more in harmony, given the persistent capital outflows that have seen foreign exchange reserves fall to $3.05 trillion in November from $3.33 trillion at the end of 2015.

The PBOC has injected a net 1,537.2 billion yuan ($221 billion) into money markets this year through open market operations, many multiples of its net 10 billion yuan injection in 2015.

Traders expect authorities` determination to discourage speculative bets against the currency will only strengthen in early 2017, when an annual limit of $50,000 that individuals can convert into foreign currency is automatically reset.

That is also around the time when Donald Trump, who has pledged to name China a currency manipulator, will assume office as US President.

Meanwhile, pressures are stacking up. Banks made mandatory reserve payments around December 15, and also need to tie up funding over the Lunar New Year period. Quarterly government payments under its benefit programs, which have been around 1 trillion yuan in previous years, could meet some of the funding needs but not all.

"The central bank will not allow the market to be flooded with money as it used to be. It still aims to cut leverage at commercial banks," said the Shanghai-based trader.

Traders also suspect cash injections this time will primarily be through medium term loans to banks, rather than cheaper open market operations such as reverse repos.

Sameer Goel, head of Asia macro strategy at Deutsche Bank, says the headwinds from a hawkish US Federal Reserve will add to challenges. Policymakers could "either allow the yuan to continue to weaken or burn reserves or tighten capital restrictions", he said.

"Likely that they will opt for a mix of the lot. Importantly, though, none of these options look supportive of the liquidity or rates complex, offshore and increasingly onshore."