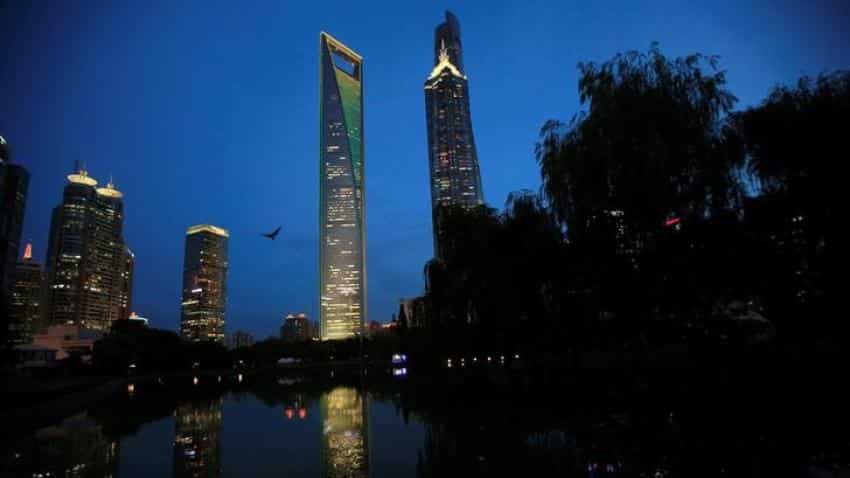 The Shanghai World Financial Center building is illuminated in the colors of the Brazilian flag to pay homage to the Rio 2016 Olympics, in Shanghai. Photo: Reuters
Written By: Reuters
RELATED NEWS

China`s economy likely grew by a steady 6.7% in the fourth quarter, the same pace as in the previous three quarters, supported by higher government spending and record bank lending that has stoked concerns about debt risks, according to a Reuters poll of 62 economists.

The world`s second-largest economy also likely grew around 6.7% for 2016 as a whole - roughly in the middle of the government`s target range - as a stimulus-fuelled construction boom breathed new life into its long ailing "smokestack" heavy industries.

But economists agree China faces increasing uncertainties in 2017, with a housing frenzy showing signs of cooling and the impact of previous stimulus measures expected to fade.

Economists in the poll estimated GDP grew 1.7%quarter-on-quarter, versus 1.8% in the third quarter, though only 15 analysts gave sequential forecasts.

"Growth has been stabilized only after massive fiscal and credit stimulus. China’s total government and private sector debt will likely surpass 285% of GDP this year, a 90% increase since 2008."

The forecast 6.7% growth rate would still be near the slowest quarterly pace since the global crisis, and China`s weakest annual expansion in 26 years.

A surprisingly strong reading on Friday would likely boost global financial markets, particularly commodities, which have already been buoyed by record China imports of crude oil, iron ore, copper and soybeans in 2016.

A weak outcome, however, would likely raise the risk of more capital outflows, putting more pressure on the yuan currency, which last year hit 8-1/2 year lows. China recently tightened curbs on outflows as its foreign exchange reserves fell to near six-year lows.

"The recent uptick in higher frequency economic indicators means that risks are tilted towards the upside. A 6.8% year-on-year print cannot be entirely discounted," said Chester Liaw, economist at Forecast Pte Ltd in Singapore.

But Beijing`s decision to double down on spending to meet its official growth target may have come at a high price, as policymakers will have their hands full this year trying to defuse financial risks created by an explosive growth in debt.

China will lower its 2017 economic growth target to around 6.5% from last year`s 6.5-7%, policy sources said, giving them more room to push reforms to contain debt and housing risks.

The central bank could slightly tighten credit conditions to help rein in debt risks and encourage companies to deleverage, but it`s unlikely to rush to raise interest rates despite an expected pick-up in inflation, policy insiders said.

Analysts see a cooling property market as a potential drag on growth this year, after many local governments imposed or tightened restrictions on home purchases to tame speculation which some fear is feeding a property bubble.

Data for December industrial output, retail sales and investment will be released along with GDP, and are expected to show the economy carried good momentum into 2017.

Industrial output likely grew 6.1% from a year earlier, easing from a 6.2% rise in November as China ordered some heavily polluting factories to shut to reduce choking smog in the north of the country.

Car sales have been a notable strong point in China, jumping 13.7% in 2016 thanks to a tax cut on smaller cars, though the incentive will be reduced this year.

Fixed asset investment growth in 2016 is expected to expand 8.3% year-on-year, half the pace seen just a few years ago. State investment largely had to take up the slack as private investment sank to record lows.

China`s economy has been generally stable at the start of 2017, continuing its "steadying and good" momentum from the second half of 2016, China`s head of economic planning said last week.

"In 2017, we expect growth to remain stable in the first half, as expansionary fiscal spending should offset the drag from a cooling property sector," economists at Nomura said in a note.

China`s corporate debt has climbed to 169% of GDP and international institutions have repeatedly urged Beijing to act quickly to tackle the problem in order to avoid a financial crisis.