Analysts polled by Reuters had expected the world`s second-largest economy to have expanded by a steady 6.8% in the quarter, the same pace as in the fourth quarter of 2016. 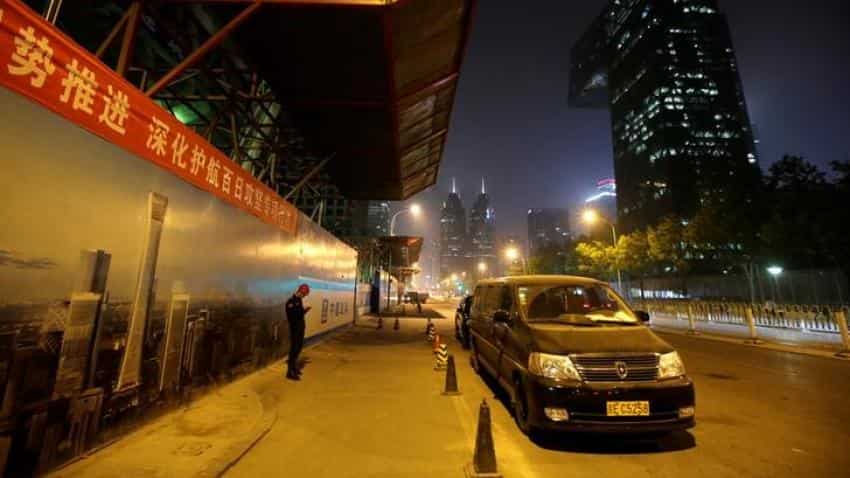 A construction security personnel stands next to a poster bearing a picture of the CBD area in Beijing. Pic: Reuters

Chinese economy beat estimates by growing at 6.9% in the first quarter of 2017 from a year earlier. Although slightly, this was still faster than market expectations.

Main reasons for this larger than expected growth was higher government spending and a frenzied property market fuelled a construction boom.

Analysts polled by Reuters had expected the world`s second-largest economy to have expanded by a steady 6.8% in the quarter, the same pace as in the fourth quarter of 2016.

On a sequential basis, the economy grew 1.3% in January-March from the previous quarter, the National Bureau of Statistics said on Monday.

Analysts had expected quarterly growth of 1.6%, dipping slightly from 1.7% in the prior quarter.

"The first quarter was a solid one for the Chinese economy, supported by a pickup in industrial activity and residential real estate investment. It is encouraging to see credit growth slowing to a less unsustainable pace; an extended period in which nominal GDP growth outpaced credit growth would greatly allay concerns about the sustainability of China`s growth model. China might not have the luxury of waiting for such a period to elapse, though: The People`s Bank of China has been timing increases in its quasi-policy rate, the reverse repo rate, against US federal funds rate hikes to curb capital outflows.

"A large increase in Chinese effective interest rates would squeeze Chinese companies` cash flows and might increase stresses on the financial system, even if debt growth remains more moderate. With U.S. interest rates likely to rise significantly faster over the next 12 to 18 months than in 2015 or 2016, the possible spillover to Chinese financial conditions is a clear downside risk to the country`s economic outlook."

"The past few months have seen the Chinese economy returning to the investment driven growth model... However, the headline GDP data still needs to be interpreted with caution. Our model indicates that a 6.9 % y/y growth should have corresponded to a sequential growth of 1.6 % q/q sa. It seems to us that the statistical bureau has adopted a different set of seasonal adjustment factors and that a smaller q/q rate has resulted in a higher headline growth. We suggest a more detailed assessment of China`s economic conditions using a wider set of economic and financial statistics."

"Chinese GDP growth exceeded expectations in the first quarter, although we expect momentum to remain downward on a year-to-year basis from 2016 to 2017. Faster growth in industrial output is the primary factor in the first quarter surprise, and due mostly to higher value-added growth related to supply-side consolidation in heavy industry. While this will remain a positive factor in the remainder of 2017, its total impact will diminish as headwinds from other sectors, such as automobile manufacturing and sales, become more significant.

"More importantly, a steady deceleration in the real estate sector should take hold from the second quarter onward, due to high base effects and policy tightening, which will create an additional drag for both the services and construction components of GDP."

"I do see some support from the private sectors. Fixed asset investment in March was also very strong. If you look at the breakdowns of fixed asset investment, there`s one section called private investment...this number has continued to accelerate in the first quarter.

"For the full year, personally, I feel growth may decelerate again in the second half of the year...That`s because we`re seeing less support from investment from the property sector, and also in terms of monetary policy, we do expect a little bit tighter monetary policy in the coming months. Because for this year, deleveraging is one of the key tasks for China`s government.

"Money supply M2 has been decelerating for the past few months. M2 may continue to slow down in the coming months.

"China may also follow the U.S. to further hike money market rates...I don`t think they are going to touch the benchmark lending rate anyway, but in terms of the rate hike in the money market, I think it`s still possible should the Fed continue to hike rates in the coming months."

"Looking ahead, we think it makes sense to focus on the monthly data for March in order to gauge the economy`s current momentum. Growth in industrial production and fixed investment both accelerated and retail sales held steady, despite the drag on car sales from higher taxes. All three series beat consensus expectations by a wide margin and suggest that economic activity strengthened at the end of Q1.

"The upshot is that China`s economy continued to experience strong growth last quarter and the upbeat data for March suggests that some of this strength will likely extend into Q2. Nonetheless, with the acceleration in credit growth that helped drive the recent recovery now being reversed, we still expect the economy to begin slowing before long."

"There are some spots of activity pick-up in the private sector. Not all of which are welcome of course. For example, the property market continues to be rather frothy. But...the general pick-up in exports corresponds to industrial activity picking up much stronger. Some of this has got to do with the more buoyant mood in external demand and this has pervaded the entire region.

"These are bright spots in any case. The fact that it is complemented by a rather accommodative fiscal policy of course lends a boost to it, and hence, we see a bit of an upside surprise.

"Our base case is we still have got growth somewhere between 6.7 to 6.8 % for full-year. What we do acknowledge is you`ll probably find some slowdown in growth as we go into the second half partly due to base effects, partly due to some of the stimulus fading off."

"On principle, because the national congress looms ahead, China is trying to avoid slowing down economic growth by investing in infrastructure. Real estate investments are a bit bubbly and although China is trying to tighten on the monetary front, real estate sales are still growing.

"It`s difficult for China to ease monetary policy - in fact, monetary policy is heading toward tightening. So the structure of supporting the economy with fiscal spending will likely continue.

"I think China should be directing the economy to slow down its growth in the long term...but on the contrary, growth is accelerating. This is good for now but it makes it difficult to see how China`s economic slowdown will land in the future. Uncertainties remain high.

"January-March growth was quite high, so if growth were to dip below 6.5 % for the year, that would mean a significant slowdown (in the months ahead). I think growth still remains in the upper 6 % range."

The Australian dollar, a proxy for China plays, was largely unchanged.

China`s major stock indexes came off earlier lows. They have risen about 5% so far this year, though shares of many resources and infrastructure companies have rallied more sharply.

The yuan was barely changed. After losing 6.5% against the surging dollar in 2016, it has recovered around 1% so far this year as the greenback lost steam.

- China`s economy has surprised global financial markets and investors by rebounding more solidly than expected in recent months. So far in 2017, it seems to have sustained the momentum, driven by a renaissance in "smokestack" industries such as steel and strong growth in the services sector.

- China`s strong demand for imported industrial commodities such as iron ore and coal has helped drive a reflationary pulse that is contributing to a global manufacturing revival.

- Exports are also starting to show signs of recovering, growing at the strongest pace in just over two years in March, though the outlook is clouded by fears of growing U.S. trade protectionism.

- Many economists, however, believe the economy will soon lose steam, arguing that the impact of earlier stimulus measures will start to fade.

- In theory, official tolerance for a slightly lower growth target should give authorities room to defuse financial risks created by explosive growth in debt in recent years, spurred in large part by the imperative to meet high growth targets.

- Officials have vowed to push ahead with reforms of often bloated state companies this year and shutter "zombie" firms which have lost money for years.

- The central bank has moved to a tighter monetary policy bias and has raised short-term interest rates several times already this year to encourage deleveraging and speculative activity, though a full-blown policy rate hike is not expected for fear of crimping economic growth.

- Regulators have also been stepping up checks on riskier activity such as shadow banking.

- However, some analysts believe the government could quickly unwind tightening measures and revert to traditional pump-priming if there is a risk of growth slowing too sharply, despite official warnings about the dangers of prolonged debt-fueled stimulus.

Gujarat Election 2022: Who will be the next chief minister? Check details