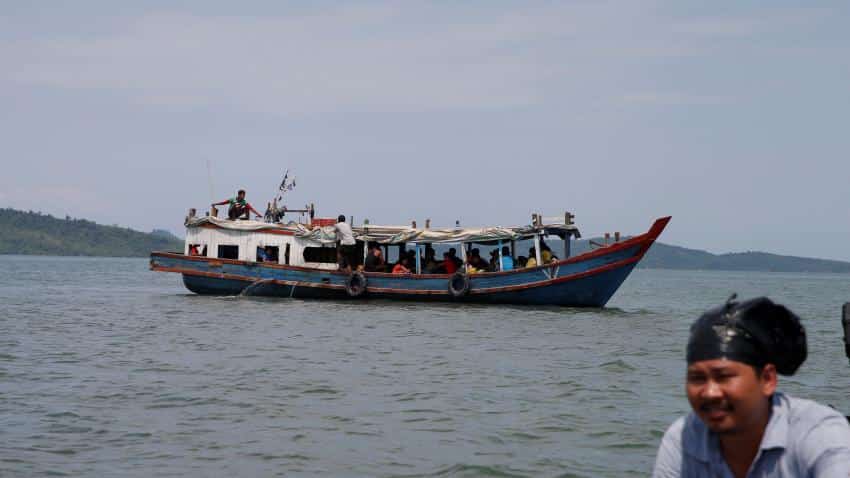 Local people ride a boat as they travel in Kyaukphyu river near Made island outside Kyaukphyu. Image Source: Reuters
Written By: Reuters
RELATED NEWS

The 36-year-old fisherman was among hundreds banned from fishing a stretch of water near the entry point for a pipeline that pumps oil 770 km (480 miles) across Myanmar to southwest China and forms a crucial part of Beijing`s "Belt and Road" project to deepen its economic links with Asia and beyond.

"How can we make a living if we`re not allowed to catch fish?" said Nyein Aye, who bought a bigger boat just four months ago but now says his income has dropped by two-thirds due to a decreased catch resulting from restrictions on when and where he can fish. Last month he joined more than 100 people in a protest demanding compensation from pipeline operator Petrochina.

The pipeline is part of the nearly $10 billion Kyauk Pyu Special Economic Zone, a scheme at the heart of fast-warming Myanmar-China relations and whose success is crucial for the Southeast Asian nation`s leader Aung San Suu Kyi.

Embattled Suu Kyi needs a big economic win to stem criticism that her first year in office has seen little progress on reform. China`s support is also key to stabilising their shared border, where a spike in fighting with ethnic armed groups threatens the peace process Suu Kyi says is her top priority.

China`s state-run CITIC Group, the main developer of the Kyauk Pyu Special Economic Zone, says it will create 100,000 jobs in the northwestern state of Rakhine, one of Myanmar`s poorest regions.

But many local people say the project is being rushed through without consultation or regard for their way of life.

Suspicion of China runs deep in Myanmar, and public hostility due to environmental and other concerns has delayed or derailed Chinese mega-projects in the country in the past.

China says the Kyauk Pyu development is based on "win-win" co-operation between the two countries.

Since Beijing signalled it may abandon the huge Myitsone Dam hydroelectric project in Myanmar earlier this year, it has pushed for concessions on other strategic undertakings - including the Bay of Bengal port at Kyauk Pyu, which gives it an alternative route for energy imports from the Middle East.

Internal planning documents reviewed by Reuters and more than two dozen interviews with officials show work on contracts and land acquisition has already begun before the completion of studies on the impact on local people and the environment, which legal experts said could breach development laws.

The Kyauk Pyu Special Economic Zone will cover more than 4,200 acres (17 sq km). It includes the $7.3 billion deep sea port and a $2.3 billion industrial park, with plans to attract industries such as textiles and oil refining.

A Reuters` tally based on internal planning documents and census data suggests 20,000 villagers, most of whom now depend on agriculture and fishing, are at risk of being relocated to make way for the project.

"There will be a huge project in the zone and many buildings will be built, so people who live in the area will be relocated," said Than Htut Oo, administrator of Kyauk Pyu, who also sits on the management committee of the economic zone.

He said the government has not publicly announced the plan, because it didn`t want to "create panic" while it was still negotiating with the Chinese developer.

In April, Myanmar`s President Htin Kyaw signed two agreements on the pipeline and the Kyauk Pyu port with his Chinese counterpart Xi Jinping, as Beijing pushed to revive a project that had stalled since its inception in 2009.

The agreements call for environmental and social assessments to be carried out as soon as possible.

While the studies are expected to take up to 15 months and have not yet started, CITIC has asked Myanmar to finalise contract terms by the end of this year so that the construction can start in 2018, said Soe Win, who leads the Myanmar management committee of the zone.

Such a schedule has alarmed experts who fear the project is being rushed.

"The environmental and social preparations for a project of these dimensions take years to complete and not months," said Vicky Bowman, head of the Myanmar Centre for Responsible Business and a former British ambassador to the country.

CITIC said in an email to Reuters it would engage "a world-renowned consulting firm" to carry out assessments.

Although large-scale land demarcation for the project has not yet started, 26 families have been displaced from farmland due to acquisitions that took place in 2014 for the construction of two dams, according to land documents and the land owners.

CITIC says it will build a vocational school to provide training for skills needed by companies in the economic zone. It has given $1.5 million to local villages to develop businesses.

Reuters spoke to several villagers who had borrowed small sums from the village funds set up with this money.

"The CITIC money was very useful for us because most people in the village need money," said fisherman Thar Sai Aung, who borrowed $66 to buy new nets.

Chinese investors say they also plan to spend $1 million during the first five years of the development, and $500,000 per year thereafter to improve local living standards.

But villagers in Kyauk Pyu say they fear the project would not contribute to the development of the area because the operating companies employ mostly Chinese workers.

From more than 3,000 people living on the Maday island, the entry point for the oil pipeline, only 47 have landed a job with the Petrochina, while the number of Chinese workers stood at more than double that number, data from labour authorities showed.

Petrochina did not respond to requests for comment. In a recent report it said Myanmar citizens made up 72 percent of its workforce in the country overall and it would continue to hire locally.

"I don`t think there`s hope for me to get a job at the zone," said fisherman Nyein Aye. He had been turned down 12 times for job applications with the pipeline operator.

"Chinese companies said they would develop our village and improve our livelihoods, but it turned out we are suffering every day."