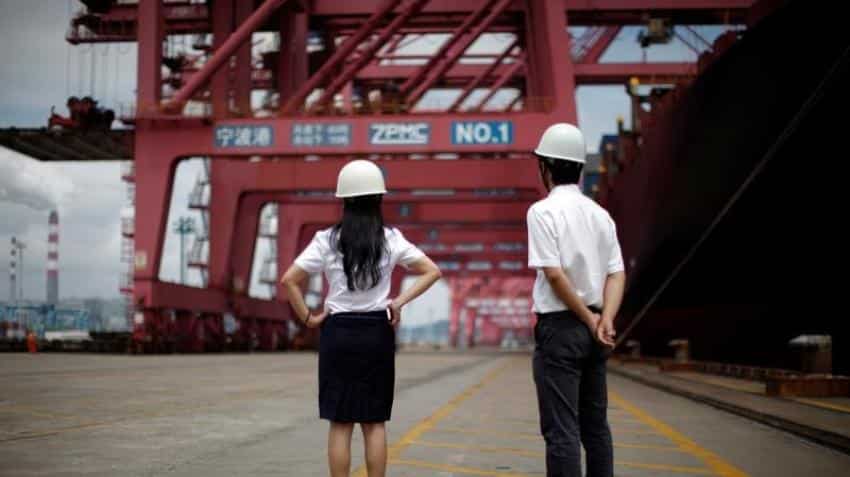 Employees stand next to a container ship at Ningbo port in Ningbo. Image Source: Reuters
Written By: Reuters
RELATED NEWS

A flood of data from China in coming weeks is expected to show the economy continued to grow at a steady pace in November, with inflation quickening and credit expanding at a faster pace despite concerns about rising debt, a Reuters poll showed.

However, concerns about the impact of tighter capital controls are also growing as China closes off more channels for cash to leave the country after the yuan slid to more than eight-year lows.

China`s foreign reserves, though still the world`s largest, may have fallen to the lowest since early 2011 in November, data is expected to show on Wednesday.

A Reuters poll of 26 analysts expects the world`s largest reserves fell to $3.091 trillion in November from $3.121 trillion in October - the fifth straight month of declines.

In recent weeks, Beijing has clamped down on outbound investments and used its foreign exchange stockpile to keep the yuan from falling too rapidly, but traders are wondering how long it can maintain its yuan defence and withstand a prolonged drain on reserves if the US dollar continues to rise.

The yuan has fallen over 3% against the US dollar since September 30, and analysts polled by Reuters expect it to recoil further to 7.14 per dollar in a year, which would mark its lowest level in nearly a decade.

The yuan has continued to skid despite unexpected signs of stabilisation in the economy this year, which are largely due to a construction boom fuelled by higher government infrastructure spending and a blistering housing rally.

However, that has also left economic growth more reliant on government spending, state-owned companies and "old economy" industries such as steel and mining which Beijing has been trying to restructure and streamline via capacity cuts.

Trade and inflation data will follow on Thursday and Friday, respectively, with fixed asset investment, retail sales, and industrial output on December 13. Loan and money data is expected December 10 and 15.

Industrial profits and factory activity have rebounded over the last few months, but the gains have relied too much on higher commodity prices than a sustained increase in real demand, the statistics bureau said last week.

Buoyed by higher prices for steel and coal, producer price inflation is expected to jump to 2.2% in November - the highest in five years - from 1.2 % in October.

Consumer price inflation is expected to quicken to 2.2% from 2.1%, according to a median forecast of 47 analysts.

Exports are expected to remain stubbornly weak, even as worries grow of trade frictions with the United States (US) next year after President-elect and vocal China critic Donald Trump takes office.

November exports likely fell 5% from a year earlier, not as bad as a 7.3% drop in October but pointing to sluggish global demand. Imports may have dropped 1.3%, after falling 1.4% in October.

China`s trade surplus is forecast to have been $46.30 billion in November, versus October`s $49.06 billion, with growing attention on its large trade surplus with the United States (US).

Industrial output is expected to rise 6.1% in November from a year earlier - unchanged from October.

Activity in China`s manufacturing sector grew more than expected in November, expanding at its strongest pace in more than two years, according to an official survey.

Retail sales growth may have picked up slightly to 10.1% as many shoppers splurged on "Single`s Day" on November 11. Chinese e-commerce giant Alibaba Group Holding said it racked up more than $5 billion in transactions in the first hour.

Growth in fixed-asset investment is forecast to be 8.3% in January-November, the same pace as in the first 10 months, according to the poll.

China watchers will be looking more closely at property investment details as the housing rally which has been one of the economy`s main drivers starts to show signs of fatigue.

Bank lending is on pace to hit a record this year, and has been led by home mortgages over the last few months, though growth of outstanding loans likely eased slightly to 13%.

Growth of M2 money supply likely moderated slightly in November, with analysts expecting an increase of 11.5%, versus October`s 11.6%.