What happens with Brexit if there's no clear winner of UK election?

The ruling Conservative Party was seen losing several seats in a recent exit poll and not getting the majority need to stay in power. 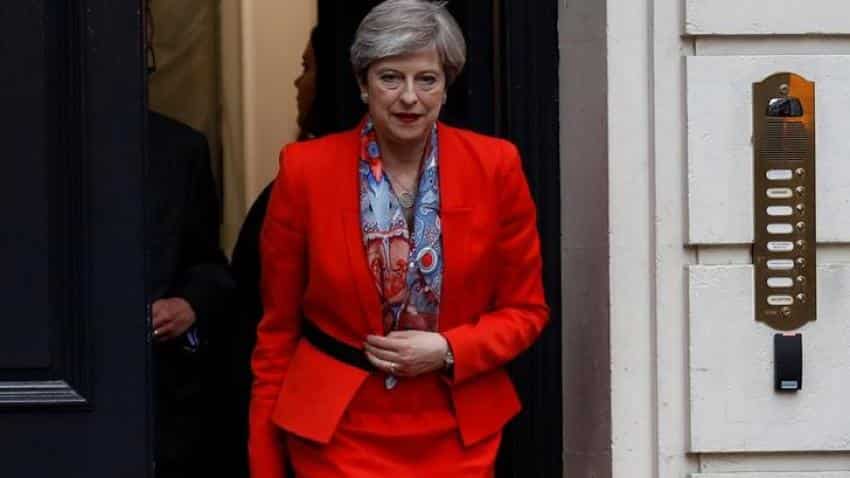 Prime Minister Theresa May's Conservative Party will fail to win a parliamentary majority in Britain's election, according to an exit poll on Thursday, a shock result that would plunge domestic politics into turmoil and could delay Brexit talks.

The exit poll predicted the Conservatives would win 314 seats in the 650-seat parliament, short of the 326 needed to claim a majority. The opposition Labour Party were forecast to win 266 seats, with the Scottish National Party on 34 and the Liberal Democrats on 14.

Below are details on what she would need to win and what would happen if she failed to get a majority:

For the election to produce a majority government, the biggest party theoretically must win at least 326 seats of the 650 United Kingdom constituencies. In practice, the threshold for a majority is around 323, because the Irish nationalist Sinn Fein party takes up no seats that it wins in Northern Ireland.

Failure to win an outright Conservative majority would leave May and Labour leader Jeremy Corbyn scrambling to find partners to support a new government.

As incumbent, May has the right to make the first attempt to form a coalition, though her tough stance on Brexit is likely to make finding a suitable partner difficult.

Until a new government is formed, May and her team of ministers remain in charge and retain their full legal powers to act on behalf of the country, although by convention they would be expected to avoid taking major decisions.

May could attempt to lead a government without commanding a majority, relying on her opponents for support in parliament on an issue-by-issue basis. This will test the cross-party support for her pre-election pledges.

While her hardline Brexit strategy is opposed by all other major parties, Britain has already started the clock ticking on leaving the bloc by triggering a two-year negotiation period with Brussels. It is unlikely she would agree to stopping the Brexit divorce.

Nevertheless, May's plans still rely heavily on being able to pass legislation through parliament. Firstly to convert EU law into British law, and then to form new post-Brexit policy on issues like immigration and tax.

Delays or outright blockages on this legislation would place huge doubts over how Britain would control its borders and trade with the EU after Brexit.

May`s fiscal agenda, including plans to balance the budget by the middle of the next decade through a continuation of existing austerity policy, would also be opposed by rival parties.

Her domestic reforms on issues ranging from fox-hunting to cuts to social care and education funding would also meet substantial resistance and demands for change.

However, her plans to clamp down on executive pay, give workers a say on strategy and make it harder for foreign firms to take over British ones could win support in principle, although others would probably demand changes to the policies before agreeing to back them.

The Conservatives formed a coalition in 2010 with the centrist, pro-EU Liberal Democrats as junior partner. They governed together until 2015.

The two parties are unlikely to be reunited in coalition without major compromises on the central principle of their election manifestos: Brexit.

The Conservatives are committed to a complete break with the EU regardless of whether a satisfactory exit deal can be reached. By contrast, the Liberal Democrats have promised voters a second referendum on whether to accept a deal with Brussels.

Electoral maths do not favour a second coalition. The Liberal Democrats tumbled to eight seats in 2015 from 57 in 2010 and are only forecast to rebound to 14, limiting their ability to take May`s support above the require threshold.

The party is led by Tim Farron, 47, who began his campaign by telling Britons they should have the option of rejecting Brexit in a second referendum and remaining within the EU.

The Conservatives` other coalition options are limited. They can traditionally rely on the support of Northern Ireland`s Democratic Unionist Party, who in 2015 won eight seats and are forecast to win the same number again.

The Scottish National Party (SNP), which won 56 seats at the last election, are at ideological loggerheads with the Conservatives.

SNP leader Nicola Sturgeon and her London-based deputy Angus Robertson argue that Scotland, where a majority voted to remain in the EU last year, should not be bound by May`s plan to withdraw from the EU single market, and have the right to hold an independence referendum at the end of the Brexit process.

A hung parliament could play in Labour`s favour even if it won less seats than the Conservatives because it is politically closer to smaller rivals on several issues. Labour has said it would try to form a minority government, and Corbyn has refused to discuss forming a coalition after June 8.

He is committed to heeding the results of Britain`s EU membership referendum a year ago in which 52 percent voted Leave against 48 percent in favour of Remain.

However, Labour has fought to water down May`s Brexit strategy which could make it easier to reach a compromise with either the Liberal Democrats, which has ruled out any coalition, or the pro-European SNP, which says it wants to stop another Conservative government.

Labour has said it would tear up May`s Brexit negotiating priorities, instead focusing the talks on retaining the benefits of the EU single market and customs union. It has also promised to consult parliament more closely throughout the negotiations.

Corbyn, who would be in charge of negotiating any coalition deal, has said he would ensure there is a deal agreed with the EU before Britain leaves, and give parliament a "meaningful vote" on whether to accept the terms of a final deal.

Labour have not defined what constitutes a meaningful vote, and this would likely be one area where pro-EU parties would demand the power for parliament to send the government back to Brussels to get a better deal - or even to halt the Brexit process altogether.

Beyond Brexit, Labour plan a radical change in Britain`s fiscal policy: raising taxes on large firms and the wealthy to pay for higher public spending on education, healthcare and police - an agenda that would fit with the anti-austerity SNP.

Labour`s finance spokesman and close Corbyn ally, John McDonnell, says he can achieve this while ensuring the national debt is reduced over the course of the next parliament.

However, Labour have also committed to creating a 250 billion pound fund for investment in infrastructure which will be spent over a 10-year period, indicating it will be funded by borrowing.

Economists expect a Labour-led government to substantially increase bond issuance, with the effect of increasing borrowing costs over the long term.

In what has been described as one of the most left-wing Labour manifestos for decades, Labour has also promised to take on multinational corporations and what Corbyn has called "wealth extractors".

Labour has pledged to raise corporation tax to 26 percent from 19 percent and impose higher taxes on the top 5 percent of earners.