The current draft is a provisional agreement until both sides can agree on a final pact for their future trading relationship and sets out commitments over citizens' rights after Brexit, the proposed 21-month transition period, and a 39 billion-pound so-called "divorce bill" that the UK would pay as a price to exit the economic bloc. 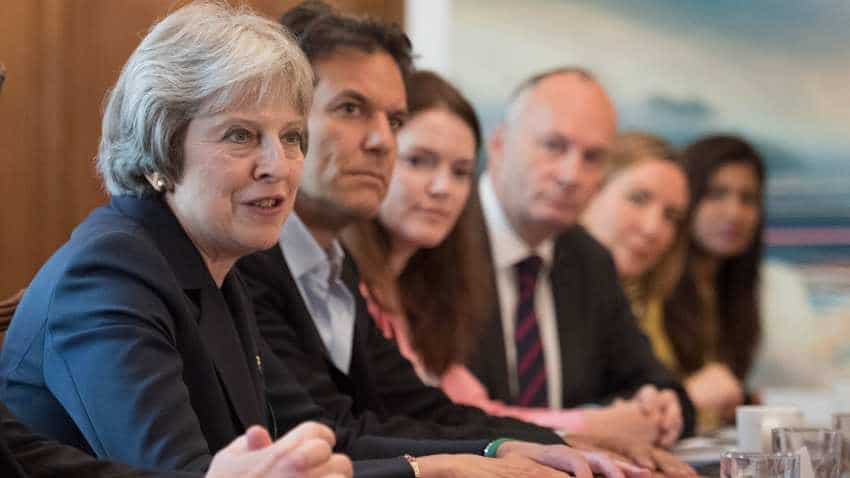 The EU has already indicated that it was not willing to re-negotiate another deal and is keen to press ahead with getting the remaining 27 member-states to sign off on the current plan. Image source: Reuters
Written By: PTI
RELATED NEWS

British Prime Minister Theresa May on Friday soldiered on with a rare move of directly addressing the public's questions over their Brexit concerns amid an ongoing rebellion within her own Conservative Party over a controversial European Union (EU) withdrawal agreement.

A day after she was hit by a number of ministerial resignations, including Brexit secretary Dominic Raab who stepped down over "fatal flaws" in the divorce deal with the EU, there are reports that his potential replacement may also be pondering stepping down from the Cabinet.

Michael Gove, who is the current environment secretary, was reportedly asked to step in as the new Secretary of State for Exiting the EU but he has been reluctant.

"I haven't appointed a new Dexeu (Department for Exiting the European Union) secretary yet and I will be making appointments to the government in due course," May said during her phone-in with London's LBC radio, when asked about the issue.

Confronted by some angry callers over allowing the UK to be locked into following EU laws with this agreement, she said, "We are not being locked in, we are taking control of our laws, our borders, leaving the single market and we are ending free movement. These are the things the British people were most concerned about. That is what the people voted for and that is what I am delivering".

"I am doing my job. I am bringing back what I believe to be the best deal for Britain and MPs will then do their job, thinking about the impact of that on their constituents," she added.

The 62-year-old premier remains defiant despite the prospect of a no-confidence vote after Jacob Rees-Mogg, a leading Tory Brexiteer, piled on the pressure by submitting a letter of no-confidence to the chair of the Conservative's influential 1922 Committee on Thursday.

His decision is expected to have led to other Brexiteers to submit similar letters to Graham Brady, the Chair of the committee of backbench Tory MPs. This could mean that a no-confidence vote in May's leadership could be held within days, with party rules dictating that it must be held "as soon as possible" if 15 per cent of the parliamentary party "meaning 48 MPs" submit letters.

According to some reports, such a vote could be held as soon as Monday if the 48-MP mark is crossed on Friday.

At a press conference in Downing Street on Thursday evening, May was asked if she was ready to fight any confidence vote, and she replied, "Am I going to see this through? Yes".

"I believe with every fibre of my being that the course I have set out is the right one for our country and all our people," she said.

Meanwhile, the EU has already indicated that it was not willing to re-negotiate another deal and is keen to press ahead with getting the remaining 27 member-states to sign off on the current plan.

The biggest sticking point in the over 500-page draft remains over what is termed as a Northern Ireland backstop, which leaves the EU with the option of keeping the whole of the UK within a common Customs Union if a future trading relationship fails to be thrashed out during the transition period, set to run until December 2021.

The current draft is a provisional agreement until both sides can agree on a final pact for their future trading relationship and sets out commitments over citizens' rights after Brexit, the proposed 21-month transition period, and a 39 billion-pound so-called "divorce bill" that the UK would pay as a price to exit the economic bloc.

European Council president Donald Tusk has confirmed November 25 as the date of an emergency summit where the remaining EU members are set to formally approve this deal. The British premier then faces the tougher prospect of getting British MPs to approve this in Parliament, with Northern Ireland's Democratic Unionist Party (DUP), which props up her minority Tory government, threatening to vote down the deal.

"Leadership is about taking the right decisions, not the easy ones," May told reporters when asked about this conundrum.

Britain had voted in favour of Brexit in a referendum in June 2016, which led to the triggering of Article 50 of the Lisbon Treaty to set the clock on the country's formal exit from the 28-member bloc by March 29, 2019.

The controversial withdrawal agreement is the result of months of negotiations on both sides and is crucial for the exit process to be completed within the set time-frame. However, if an orderly exit arrangement cannot be finalised, Britain faces the prospect of crashing out of the EU without any deal, which would open up a whole new set of complications.