European shares fell as much as 1.2 percent after data showed the German economy contracted for the first time since 2015, tracking similar losses in Asia where data in Japan and China underscored worries about weaker growth. 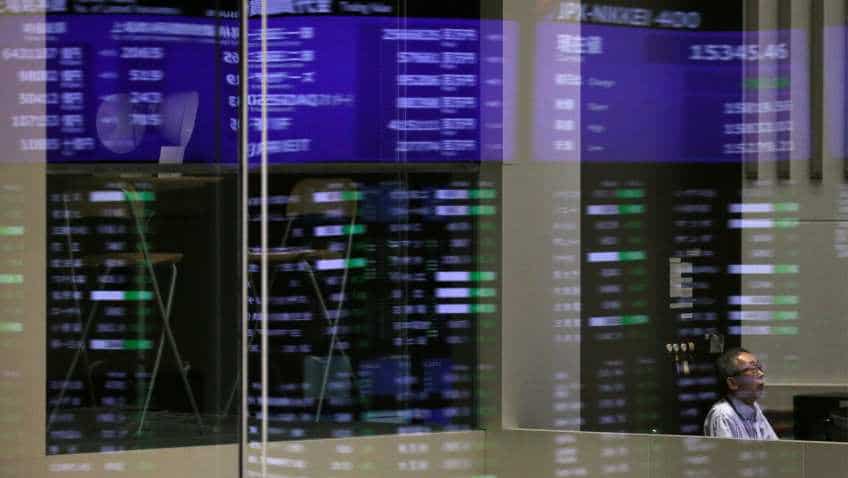 The British cabinet will meet at 1400 GMT. The deal must go through parliament for approval before the country exits the bloc on March 29, 2019. Image source: Reuters

Oil struggled to find a floor and stocks tumbled on Wednesday as disappointing German GDP figures heightened worries over slowing global growth, while the pound eased off peaks as Prime Minister Theresa May faced the hard task of selling her Brexit deal.

European shares fell as much as 1.2 percent after data showed the German economy contracted for the first time since 2015, tracking similar losses in Asia where data in Japan and China underscored worries about weaker growth.

The weak open in Europe sent the MSCI`s world equity index down 0.3 percent by 0930 GMT. Sterling steadied just below a 7-month high versus the euro and remained close to $1.30 after Britain and the European Union agreed on the text of a Brexit divorce deal.

May will try to persuade senior ministers on Wednesday to accept the draft agreement that opponents said would imperil her own government and threaten the unity of the United Kingdom.

"After 873 days of bickering, point scoring, intransigence on both sides, and seemingly irreconcilable differences, we finally have a deal," said Deutsche Bank strategist Jim Reid. "Now this easy part is out of the way along comes the hard part of selling it to a divided Parliament full of vested interests and factions," he added in a note.

The British cabinet will meet at 1400 GMT. The deal must go through parliament for approval before the country exits the bloc on March 29, 2019.

Sterling/dollar implied overnight volatility jumped to 23 percent, its highest since a general election in June 2017, signalling that investors were anticipating wild swings ahead for the British currency.

"Sterling volatility is expected to rise as the near term upside and downside risks crystallise," said Neil Wilson, analysts at Markets.com. "The cabinet will likely pass it but with assault from all sides of the house and Brexit divide, it seems impossible parliament will vote it through."

LONGEST LOSING STREAK
Meanwhile, oil attempted to rebound after plunging around 7 percent the previous session, with surging supply and the spectre of faltering demand scaring off investors.

U.S. West Texas Intermediate (WTI) crude futures fell in early deals but were up 1 percent at $56.29 a barrel. In the previous session it suffered 12 straight sessions of losses.

"We went through our archives yesterday and found a bit more daily data back to 1977, and we still can`t find a losing run of this magnitude," said Deutsche Bank`s Reid.

Brent crude oil futures also bounced 1.8 percent at $66.57 per barrel. In the previous session they hit an eight month low following a 25 percent slide from the four-year high reached early in October.

The Dow and S&P 500 ended slightly lower on Tuesday as lower oil prices took a toll on energy shares, offsetting a small gain in technology stocks and renewed hopes for progress in U.S.-China trade talks.

Energy stocks were among the biggest faller in Europe on Wednesday, down as much as 1.8 percent.

The Organization of the Petroleum Exporting Countries (OPEC) warned on Tuesday that a supply glut could emerge in 2019 as the world economy slows and rivals increase production more quickly than expected.

The oil plunge underlined cracks in the global economy.

The German economy shrank 0.2 percent in the third quarter as global trade disputes and problems in the auto industry threw the traditional export growth engine into reverse. Earlier in the day, data from Japan confirmed the world`s third-largest economy contracted in the third quarter.

ITALIAN BUDGET WOES
Still in currency markets, the euro hovered below $1.13 as Italy re-submitted its draft budget for next year to the European Commission with the same growth and deficit assumptions that had been rejected by Brussels.

"While boosting its privatisation plan and committing to mitigate spending overshoots, the Italian government did not change its deficit targets. This will likely lead the European Commission to recommend an infringement procedure," said Morgan Stanley analysts.