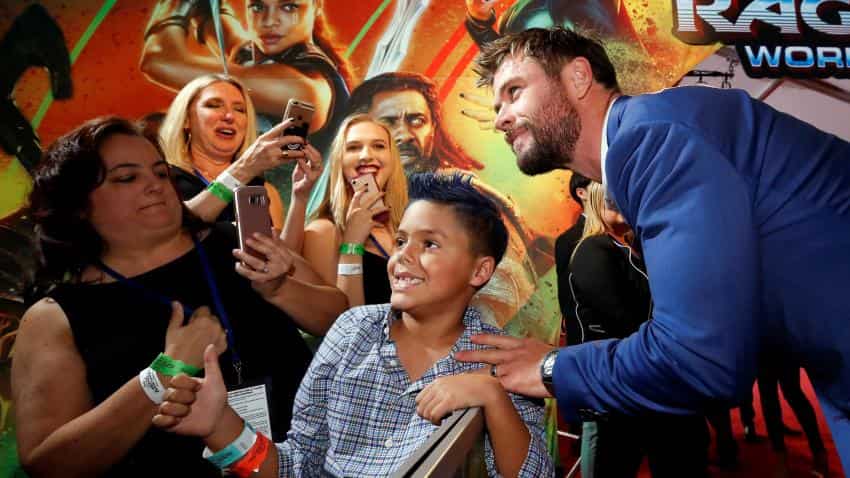 Disney-Marvel`s "Thor: Ragnarok" is heading for a stellar opening weekend with $121 million at 4,080 North American locations -- the fourth best launch of 2017.

The third Thor movie is also putting an emphatic end to the month-long box office slump that saw the worst October in a decade. Among 2017 titles, its debut weekend trails only "Beauty and the Beast" at $174.8 million, "Guardians of the Galaxy Vol. 2" at $146.5 million and "It" at $123.4 million.

"Thor: Ragnarok" also officially launches the holiday season with a major bang. Moviegoing has been battered this year by a subpar second half that`s pulled down 2017 grosses by 5%, but it should rebound somewhat, thanks to "Thor: Ragnorak," Warner Bros.-DC Entertainment`s "Justice League" (which opens Nov. 17) and Disney-Lucasfilm`s "Star Wars: The Last Jedi" (opening Dec. 15).

"November has been a hotbed for blockbusters and is as important to any given year as even the hottest summer months and has been the launch pad for some of the biggest franchises in box office history including `Harry Potter,` `The Hunger Games` and `Twilight,` not to mention the traditional home for James Bond," noted Paul Dergarabedian, senior media analyst with comScore. "Now Thor joins the rarefied air that is the $100 million November opening club, becoming only the ninth film to ever reach this threshold and the first to do it within the first part of the month."

STXfilms` R-rated "A Bad Moms Christmas," which opened Wednesday, is heading for a respectable $21.6 million at 3,615 sites for its first five days. A24`s launch of Greta Gerwig`s "Lady Bird" posted the best platform opening of the year with $375,612 on four screens for an impressive $93,903 per-screen average.

With Chris Hemsworth reprising the title role, "Thor: Ragnarok" will finish far above its predecessors, nearly doubling the 2011 opening of "Thor" at $65.7 million and coming in 41% above the 2013 sequel "Thor: The Dark World" at $85.7 million.

"Thor: Ragnarok" is directed by Taika Waititi from a screenplay by Eric Pearson and the writing team of Craig Kyle and Christopher Yost. It also stars Tom Hiddleston, Cate Blanchett, Idris Elba, Jeff Goldblum, Tessa Thompson, Karl Urban, Mark Ruffalo, and Anthony Hopkins. The character of Thor, based on Norse mythology, was created in 1962 by Stan Lee, Larry Lieber, and Jack Kirby for Marvel Comics.

"Thor: Ragnarok" has also taken in $306 million overseas, including $109 million in its international launch last week in 52% of foreign markets. It expanded to most other overseas territories this weekend.