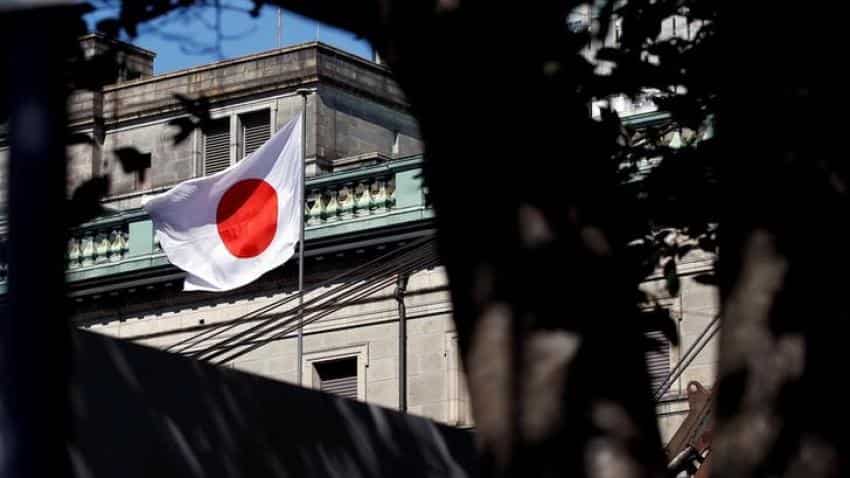 A Japanese flag flutters atop the Bank of Japan building in Tokyo. Image source: Reuters

The Bank of Japan ramped up efforts to dispel market speculation of an early withdrawal of its massive stimulus, boosting its bond buying plan on Wednesday and reassuring markets that monetary policy will remain ultra-loose given meagre inflation.

"The economy is expanding moderately but prices remain weak. There`s some distance to 2 percent inflation," Iwata said in a speech to business leaders in Oita, southern Japan.

A summary of BOJ policymakers` opinions, released on Wednesday, quoted one of them as saying at January`s rate review that a rise in market expectations for an imminent departure from monetary easing would be "undesirable".

This cautious view of the inflation outlook came despite signs of economic strength, with data out on Wednesday showing factory output grew in December at the fastest pace in eight months on robust global demand for Japanese goods.

Subdued inflation and the strengthening economy pose a dilemma for the BOJ, which is forced to maintain its radical stimulus programme despite side-effects such as the drag on bank profits from ultra-low borrowing rates.

Signalling its resolve to keep rising global bond yields from pushing up Japanese yields, the BOJ on Wednesday increased the amount of Japanese government bonds (JGB) with three to five years to maturity it will buy in regular market operations.

The BOJ`s announcement pushed the dollar up to an intraday high of 109.095 yen, though it later pulled back below 109 yen. The 10-year JGB futures price ticked up to 150.26 from around 150.20 following the announcement.
IWATA`S TERM COMING TO AN END

Governor Haruhiko Kuroda has struggled to tame market speculation that the BOJ may follow in the footsteps of U.S. and European peers in heading for an exit from crisis-mode policy, fuelled in part by Japan`s brightening recovery prospects.

Complicating Kuroda`s task is a growing chorus of policymakers on the BOJ`s nine-member board looking at an exit from ultra-accommodative policy, the summary of debate at January`s rate review showed.

"If the economy and prices continue to improve, the BOJ may need to consider adjusting its yield targets to make its policy framework more sustainable," one board member said, foreshadowing an anticipated rise in rates.

Even Iwata, a vocal advocate of aggressive easing, said BOJ efforts alone won`t be enough to hit 2 percent inflation and urged the government to remove barriers that hamper competition.

These remarks run counter to Iwata`s earlier view that central banks are primarily responsible for accelerating inflation and can do so as long as they print money fast enough.

Iwata is seen as an architect of the BOJ`s huge asset-buying programme, dubbed "quantitative and qualitative easing" that aimed to shock the public out of a deflationary mindset.

The departure of Iwata, who said he was "quite sure" he wouldn`t be reappointed, would symbolise an end to the BOJ`s radical monetary experiment.

Iwata`s exit could also raise the odds of BOJ dropping its loose pledge to buy bonds at a pace that increases its holdings by 80 trillion yen ($735 billion) per year, an assurance made obsolete by the pace already slowing to almost half that level, some analysts say.

ISRO plans to return to Mars, explore dark side of Moon with Japan