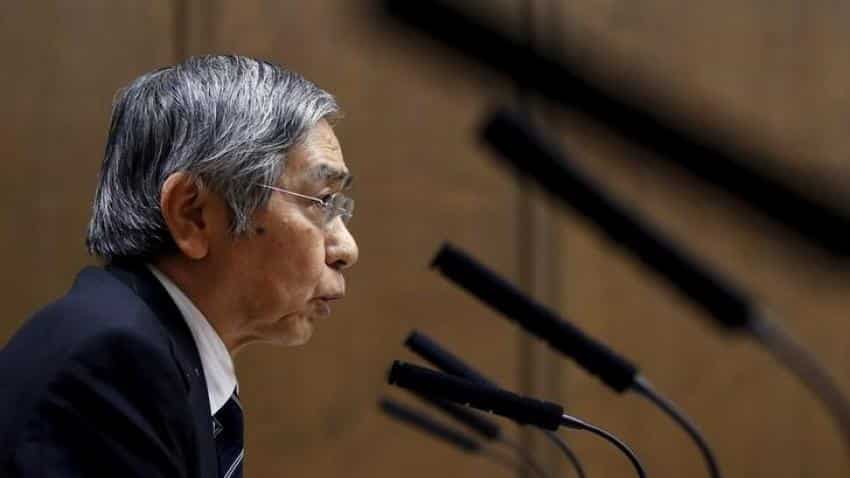 The Bank of Japan kept monetary policy steady on Friday and upgraded its assessment of private consumption and overseas growth, signalling its confidence that an export-driven economic recovery was broadening and gaining momentum.

But Governor Haruhiko Kuroda is likely to reassure markets the BOJ will still lag well behind the Federal Reserve in dialling back its massive stimulus programme, with inflation far from reaching the BOJ's 2% target, say sources familiar with its thinking.

"Private consumption has shown increased resilience against a background of steady improvement in the employment and income situation," the BOJ said in a statement announcing the policy decision.

Friday's statement took a more upbeat view than that of the previous meeting in April, when the BOJ said consumption was "resilient".

As widely expected, the BOJ maintained its pledge to guide short-term interest rates at minus 0.1 percent and the 10-year government bond yield around zero under its yield curve control (YCC) policy.

It also left unchanged a loose pledge to keep increasing its bond holdings at an annual pace of 80 trillion yen ($729.33 billion).

The BOJ meeting followed in the wake of the US Federal Reserve`s rate review on Wednesday, when it raised interest rates for the second time in three months and outlined a plan to reduce its massive balance sheet.

Private consumption has been a soft spot in Japan`s otherwise strengthening economy, with its weakness blamed for keeping inflation subdued by discouraging companies from raising prices.

"Wages and the labour market are most closely linked to consumer prices. The labour market has tightened even further, so I think the BOJ wanted to highlight that point by upgrading its assessment on consumer spending," said Hiroshi Miyazaki, senior economist at Mitsubishi UFJ Morgan Stanley Securities.

"STEALTH" TAPERING?
Nodding to growing signs of recovery in emerging economies, the BOJ said overseas economies were "continuing to grow at a moderate pace as a whole."

That was a more optimistic view than in April, when it pointed to some weaknesses in emerging economies.

The BOJ maintained its overall assessment of Japan`s economy to say it was turning toward a moderate expansion.

But those very signs of life in Japan`s economy have presented a fresh communication challenge for the BOJ, pushing it to be clearer with markets on how it might withdraw its stimulus - without sounding as if such an action is imminent.

Inflation remains disappointingly low, making BOJ officials wary of releasing too much detail on how the bank may exit its ultra-loose policy in the future.

Core consumer prices rose just 0.3% in April from a year earlier, as companies remain cautious of raising prices for fear of scaring away price-sensitive households.

"Unless inflation accelerates unexpectedly, the BOJ will likely stand pat on policy at least until next April when Kuroda serves out his current term," said Izuru Kato, chief economist at Totan Research.

Market players are focusing on Kuroda`s post-meeting briefing at 3:30 p.m. (0630 GMT) for any new insights into what might trigger a future hike in the BOJ`s bond yield target.

Kuroda is also expected to be grilled at the briefing on the inconsistency between the BOJ`s 80-trillion-yen bond-buying pledge and a recent slowdown in actual bond purchases.

While the BOJ argues it still has plenty of bonds to buy, many analysts expect its bond-buying programme to reach a limit with the bank already owning more than 42 percent of the market.

Indeed, recent data showed the BOJ`s bond buying has slowed considerably in recent months. Analysts expect the BOJ to slow the pace further to around 60 trillion yen by year-end and to omit the 80-trillion-yen pledge from its policy statement.